Image analysis and verification revealed that the housing shown is the Orange Jaffa village constructed to accommodate IDPs in Sarmada town, rural Idlib, with funding from a Palestinian Organization 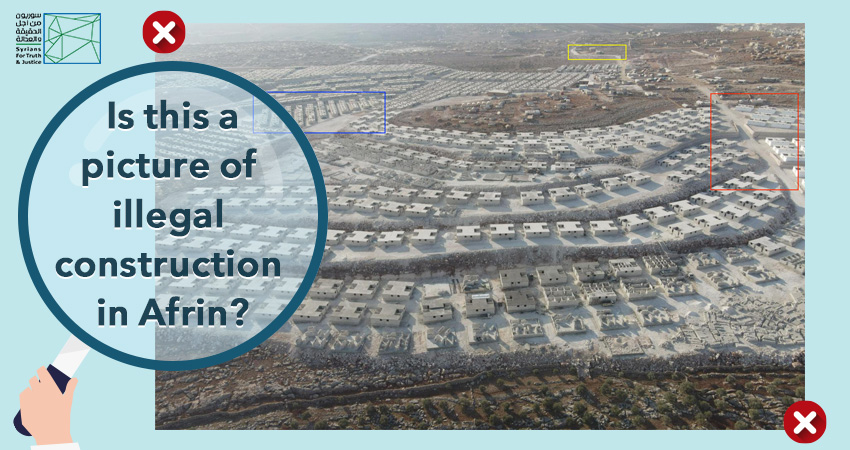 Syrians for Truth and Justice (STJ) tracked the posts reporting this news and found that they all tagged the Human Rights Organization -Afrin –Syria as a source.

STJ also detected that this news was spread following a Facebook post, dated 29 January 2022, by the chairman of the southern branch of the Islamic Movement in Israel, Hamed Abu Daabas, declaring the completion of 600 housing units in northern Syria – without specifying the area – funded by a fundraiser launched by the Igatha 48 Organization.[1]

Since the Human Rights Organization -Afrin – Syria was tagged as a source in all the posts reporting the news, we searched the Organization’s official social media accounts; however, we did not find a post citing the building of new housing units in Afrin. Consequently, we suggest that the post may have been deleted or the news incorrectly attributed the organization.

STJ’s open source investigator analyzed the published images and located the coordinates of the village shown. Afterwards, our open source investigator matched the published ground images of the village to satellite images on the detected GPS coordinates and concluded that the village is the Orange Jaffa village (as named by the Igatha 48 Organization), and is located near Babisqa village in Sarmada region, north of Idlib province — not in Afrin.

Northern Syria, including Afrin, has witnessed large-scale construction of housing by several international and local organizations. Consequently, the post by the chairman of the Islamic Movement was confusing. Posts speaking to new housing units frequently cite the location of the village and the donor — the posts about the alleged new housing units in Afrin contained neither piece of information. Through STJ’s investigation, our researchers identified the following facts about the new housing units shown in the circulated images:

In a report released on 6 May 2021, the Syria Justice and Accountability Center expressed its raised concerns about the prospect of forced demographic change in the country and the role of foreign aid in facilitating this process. The report specifically focuses on the role of Kuwait and other regional governments in financing Turkish-led reconstruction efforts on land in Afrin belonging to displaced Kurdish populations.

The Center also confirmed through its report that these foreign-funded housing projects are desperately needed to meet the humanitarian needs of IDPS currently residing in the area, but the manner of their implementation means that they are also contributing to processes of demographic change that many have seen as the explicit intent of Turkey and its proxies. The report viewed that by funding the construction of settlements that hinder the return of the original residents displaced by Turkish-backed forces, foreign donors may be complicit in the forced transfer of populations – a crime against humanity under international criminal law.