After verification and investigation, it was found that this photo accompanied dozens of news on Syrians’ returns from Turkey, Lebanon and other destinations

“RUS Reconciliation Center gets appeals from Syrians under illegal armed formations in Idlib to help them return home in Gov’t controlled areas. To arrange it crossing points to open JAN13 in Habit, Abu Duhur, alHadir. Information is being distributed”

Attached to the tweet was also a news link on the official website of the Russian Ministry of Defense. The news provided a briefing on Syrian refugees and information about the amount of food aid provided and military operations carried out by the ministry, in addition to locating the three safe crossings that Russia opened and a repetition of the above tweet. 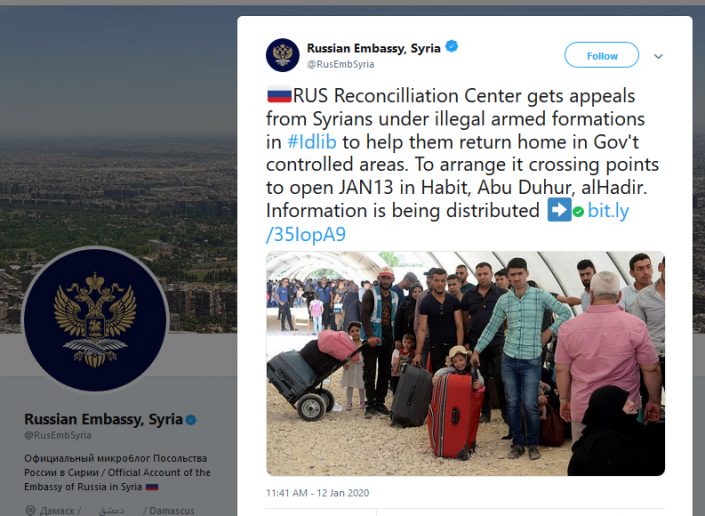 The tweet confused the readers, especially activists, since the photo attached to it has been already used in different contexts. The tweet doesn’t indicate that people in the attached photo are not at one of the crossing points it mentions, which means that the photo was used for the purpose of indirect deception. People on social media circulated this photo on the basis of being of Syrians trying to return voluntary through “humanitarian crossing points” recently opened by Russia, notwithstanding the fact that the tweet states that the crossings would be opened on January 13, 2020; a day after the tweet was posted.

STJ tracked the published photo and found that it has been attached to dozens of articles talking about Syrian issues, especially the refugee situation.

On June 6, 2018, by way of example but not limited to, the Turkish Anadolu Agency (Turkish version) published news on the returns of Syrians to their hometowns in order to spend Ramadan holiday.[1]

Image (2) a screenshot of the abovementioned tweet in the Turkish version.

Image (3) a screenshot of the abovementioned tweet in the English version.

On October 15, 2018, the same agency published a news about a new batch of Syrians returning from Lebanon, and attached it to the same previously published photo.[3]

Image (4) a screenshot of the abovementioned tweet in the English version.