Following a thorough process of verification and investigation, it became clear that Masaken al-Shuhada Residential Compound had previously been subjected to aerial shelling during the Operation Peace Spring, which inflicted massive damage on its two blocks

Over the first half of April 2020, Syrian local media outlets and others concerned with human rights circulated photos and videos, which they reported as showing the Turkey-backed Syrian armed opposition groups demolishing Masaken al-Shuhada/Martyrs’ Residential Compound in Zaradesht neighborhood,[1] Ras al-Ayn/Serê Kaniyê city. However, following a process of verification and investigation, it appeared that these residential blocks have been previously subjected to air raids, initiated by Turkish aircraft during the Operation Peace Spring that inflicted a massive destruction on them.[2] Affected thus by the aerial shelling, the blocks were almost totally destroyed and turned inhabitable, before they were levelled by the fighters of the opposition-affiliated-National Army, which they embarked on as an act of vengeance against the residents who lived in these houses prior to the Operation Peace Spring. 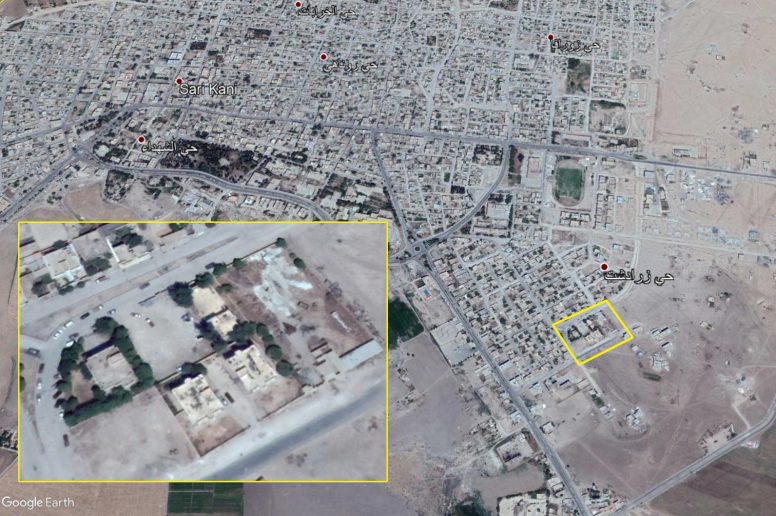 Photo no. (1) – A satellite image of Masaken al-Shuhada before the Operation Peace Spring.

Photo no. (4) – The four photos are taken from a video[3] published by a media outlet[4] on 8 April 2020, which it captioned as the Turkey-backed armed groups of the Syrian National Army demolishing Masaken al-Shuhada in Ras al-Ayn/Serê Kaniyê. 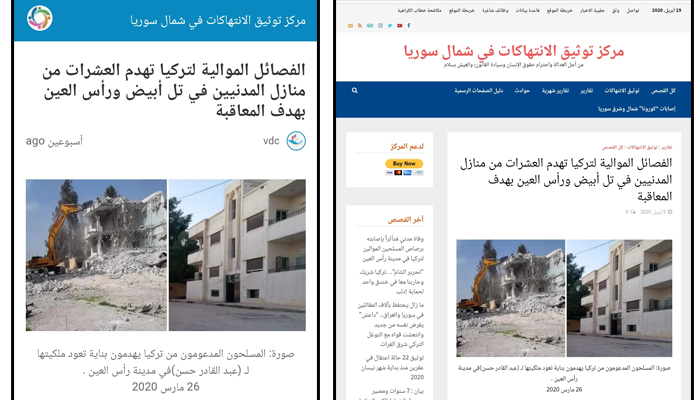 Photos no. (5) and (6) – The two photos are taken from the Violations Documentation Center in Northern Syria, which posted a photo and a video on 5 April 2020,[5] captioning both as pro-Ankara armed groups demolishing Maskan al-Shuhada in a collective punishment to the residents.

Photo no. (7) – It shows the destruction that befell Masaken al-Shuhada in Zaradesht neighborhood, Ras al-Ayn/Serê Kaniyê city, before and after the Operation peace Spring. The photo to the right is of a building within the compound before the Turkish military operation, launched on 9 October 2019. The photo to the left is of the same building while being demolished by the Turkey-backed Syrian opposition armed groups. Credit: A resident of Masaken al-Shuhada in Ras al-Ayn/Serê Kaniyê.

Syrians for Truth and Justice/STJ tracked the evidence provided by open sources, along with the published photos and videos, and interviewed a resident of the Masaken al-Shuhada Compound in  Ras al-Ayn/Serê Kaniyê and a person who witnessed the demolishment,[6] concluding that the context within which the incident was reported is incomplete, for the compound was rendered almost totally destroyed by the aerial shelling that targeted it during the Turkish military operation in Northeastern Syria, namely before the factions of the National Army opted for destroying it.

A resident of Masaken al-Shuhada Compound in Ras al-Ayn/Serê Kaniyê provided STJ with a video showing the extent of the damage suffered by the residential blocks after the Turkish aircraft raided them on 15 October 2020.[7] In the video, filmed in November 2019, the buildings appear almost destroyed and inhabitable.

Photos no. (8), (9) and (10) – The three photos are taken from the above-mentioned video, obtained by STJ from a resident of Masaken al-Shuhada Compound in Ras al-Ayn/Serê Kaniyê, show the destruction of the buildings as a result of the Turkish aerial shelling during Operation Peace Spring.

Investigating into the incident, STJ fact checked the video published by local media outlets and the Violations Documentation Center in Northern Syria, in which Turkey-backed Syrian armed opposition groups are demolishing Masaken al-Shuhada Compound in Ras al-Ayn/Serê Kaniyê. Furthermore, STJ had interviewed a witness of the demolishment, who reported that fighters of the Sultan Murad Division, stationed in Zaradesht neighborhood, are responsible for tearing the buildings down on 25 March 2020, which they opted for as a collective punishment to their former residents on the pretext that they were affiliated with the Autonomous Administration before the Turkish invasion of the area.

[1] A residential compound consisting of two blocks/buildings, encompassing six flats each. The compound was established by the Syrian government for the security officers in Ras al-Ayn/Serê Kaniyê. Nonetheless, as the Autonomous Administration took over the city in 2013, it handed the compound’s flats to the families of their dead militants and families with whom they had close ties, calling them Masaken al-Shuhada/ Martyrs’ Residential Compound.

[2] On 9 October 2019, the Turkish armed forces, accompanied by the Syrian armed opposition groups, operating under the National Army, an affiliate of the Syrian Interim Government, which is in turn an offshoot of the Syrian National Coalition, invaded an area in Northeastern Syria, controlled by the Syrian Democratic Forces/SDF, constituted of the Kurds-led People’s Protection Units/YPG. At the onset of the incursion, Turkey and the armed groups backing it randomly bombarded civilian areas, sending 200,000 persons at least on a flight of displacement.  Ending on 22 October, 2019, the Operation Peace Spring led to Ankara and its allies’ control of massive border areas in Northeastern Syria— a strip of 120 km between the two cities of Ras al-Ayn/Serê Kaniyê, northern al-Hasakah, and Tell Abiad, northern Raqqa.

[4] The video shows fighters of the Turkey-backed National Army demolishing the houses of Masaken al-Shuhada in Zaradesht neighborhood, Ras al-Ayn/Serê Kaniyê. The video was posted by Pasari Video Project on Facebook on 8 April 2020. Last visited: 28 May 2020. https://www.facebook.com/pasarivideoproject/videos/159532305308486/.

[7] The witness refused to reveal his name for security concerns, while the interview was conducted online on 19 April 2020.