After verification and investigation, it was found that the person in the photo is a forty-year-old homeless beggar in Hama who seemed to be suffering a mental illness

Local media and social media activists circulated a photo; they said it belongs to an amnesiac man recently freed from one of the Syrian regime’s detention centers in Hama. However, STJ checked into the man’s story and verified that he is a resident of the city of Hama and has never been arrested.

Several photos of the man wearing ratty clothes, were published in early December 2019. It was later known that he is always seen in the Assi Square in the center of Hama, near the Um al-Hassan park, as he sleeps there-in the park-or on the sidewalk by the edge of the Orontes River.

STJ field researcher in Hama identified the man in the circulated photos and confirmed-based on locals’ accounts- that he is married with two children and hails from al-Sawaeiq neighborhood in Hama. The researcher added that this man has never been arrested, and that he practices begging on city streets, and suffers from some kind of mental illness. He is seen almost daily-from a long time- in the Assi Square, in the center of Hama, and he is known to all passers-by and his name is Ahmed Al-Dasher.

According to a local, someone photographed that homeless man and published his photos on social media in order to find donors and volunteers who can secure him a shelter and take care of him. However, several social media pages interested in the Syrian issue, published the photos without checking into them and reported a wrong story of the man. 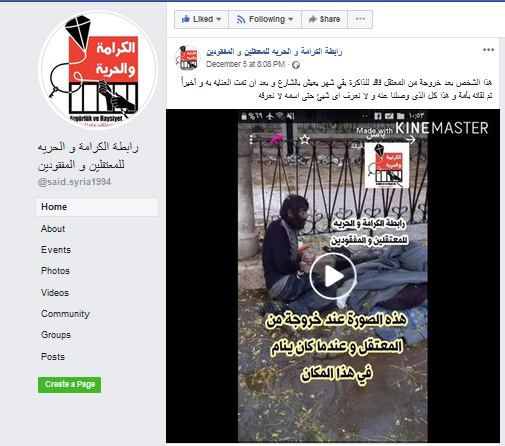 Image (1) taken from a Facebook page, saying that the man is a former detainee.

The family of the homeless man tried several times to take him to his house but he always refused to be there and flee, especially when they forced him to stay. A Nursing Home and several volunteer teams in the city of Hama tried to provide care and shelter to him, but he refused to get any help and insulted the team and those who tried to take him to the Nursing Home. People who tried to help him individually were also met by repulsion and verbal abuse from him. A patrol of the Hama police wrote a statement about the person’s condition and forcibly transferred him to Ibn Sina Hospital for Psychiatric Diseases in the city of Damascus.

Begging and homelessness have prevailed widely in the city of Hama in the past few years due to the great psychological pressures exercised on locals, poor economic conditions and displacements. The police often detain those beggars and homeless and place them in prisons, sanatoriums, or place them in social centers accommodations-if available, but rarely. However, if they put in prison, they released shortly after and return to the street.