After verification and investigation, it was found that the man appeared in the photo is not a civilian from Ras al-Ayn- as reported by Baladi News- but a fighter of the Kurdish Hawks of the opposition’s National Army 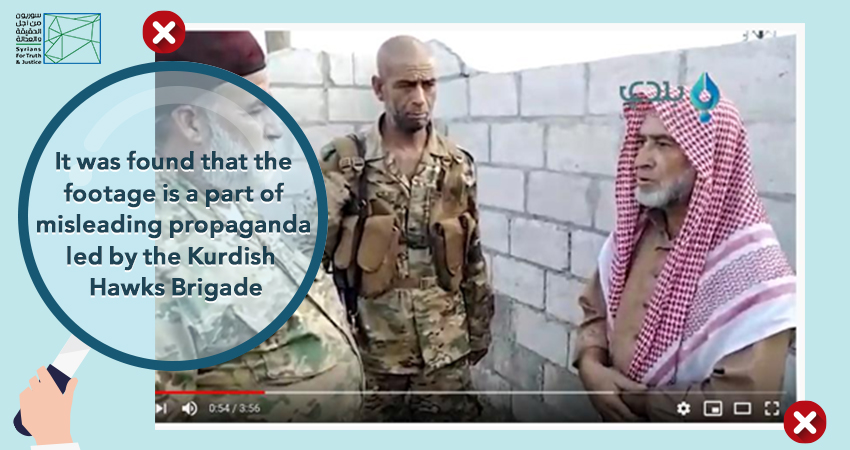 On October 18, 2019, few days after the launch of Turkey’s “Operation Peace Spring”, the Baladi News website published a footage entitled: “Baladi News reporter accompanies the Kurdish Hawks/Sokor al-Kord brigade (the 2nd division) of the National Army, in a patrol inspecting the civilians’ situations in the city of Ras al-Ayn”. The footage shows five men in a yard of some civilian house, three of whom wearing military uniforms while the two others are in civilian clothes (jellabiya and igal).

The footage started with the man-in the white beard and red hat- introducing himself as a Kurdish fighter of the Kurdish Hawks in the al-Hamzat Division affiliated with the National Army of the opposition, saying to the civilian resident that he had heard about his Kurdish family to be residing the area and that the armed opposition groups would expel the PKK and save people from it. Then he asked the man to say his opinion in the PKK’s rule and to talk about the injustice they had suffered during the period of that party’s control. The man answered that the PKK indeed subjected them to great injustice and forcibly recruited guys and girls… etc. and he added that he thanks God for the entry of the armed opposition groups to their city because of the safety felt by the civilians with their presence. The man also asked all of those fled the city to return, for the security situation became stable, as he said. 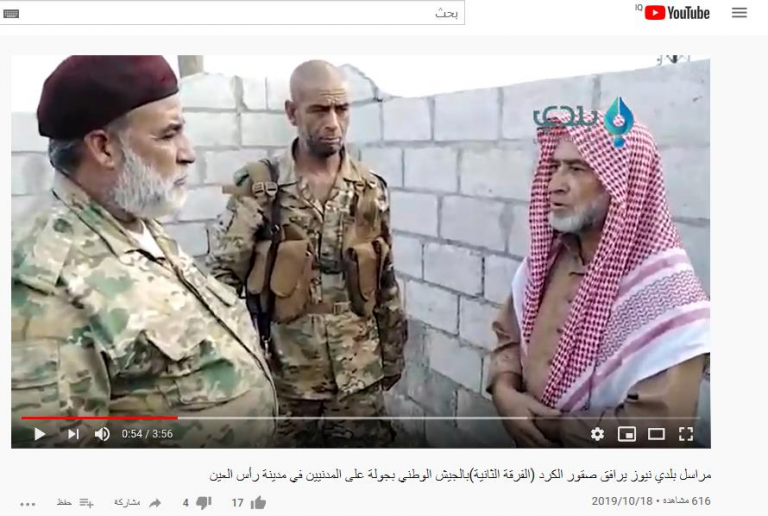 Image (1) a screenshot from the footage published by Baladi News Network on October 18, 2019, of- as it said- a patrol of the Kurdish Hawks inspecting the civilians’ situations in the city of Ras al-Ayn (the network deleted this footage later)

However, on October 19, 2019, one day after the publication of the first footage, the same website published another footage entitled: “The Kurdish Hawks Brigade protects civilians’ property in Ras al-Ayn, al-Hasakah”. This footage shows the man, who was filmed the day earlier to be a civilian, wearing a military uniform with the revolution flag badge (the green flag), and standing next to a commander of the Kurdish Hawks (the same person in uniform appeared in the first footage). 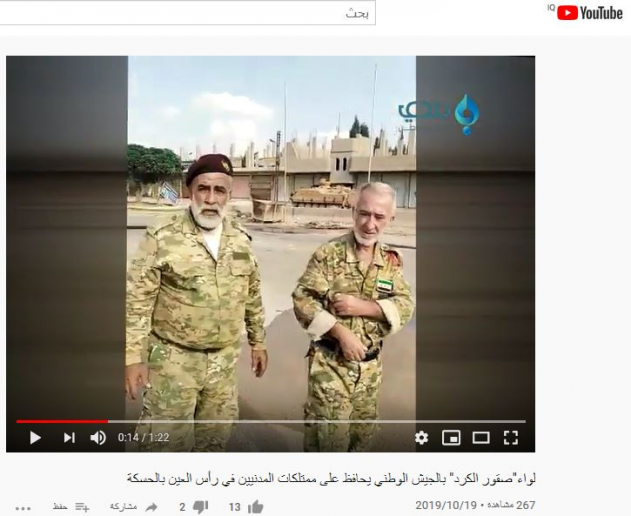 Image (2) a screenshot from a footage published by Baladi News Network of- as it said- a patrol of the Kurdish Hawks to protect civilians’ property in the city of Ras al-Ayn on October 19, 2019.

Those footages stirred up a great deal of indignation among Syrian activists, who considered them a part of the misleading and deceptive practices trying to raise the profile of the Turkish invasion of northeastern Syria.

Image (3) the same man appears in the two footages published by Baladi News.

After that, Baladi News network released an apology statement for publishing false information, and deleted the videos from its YouTube channel on October 22, 2019. 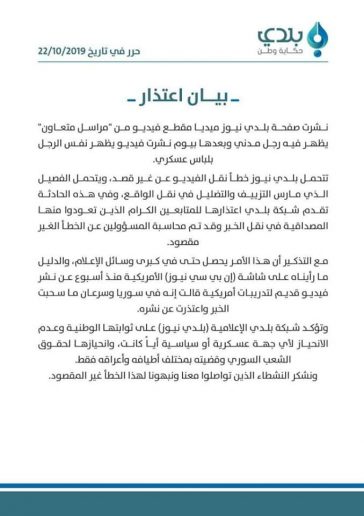