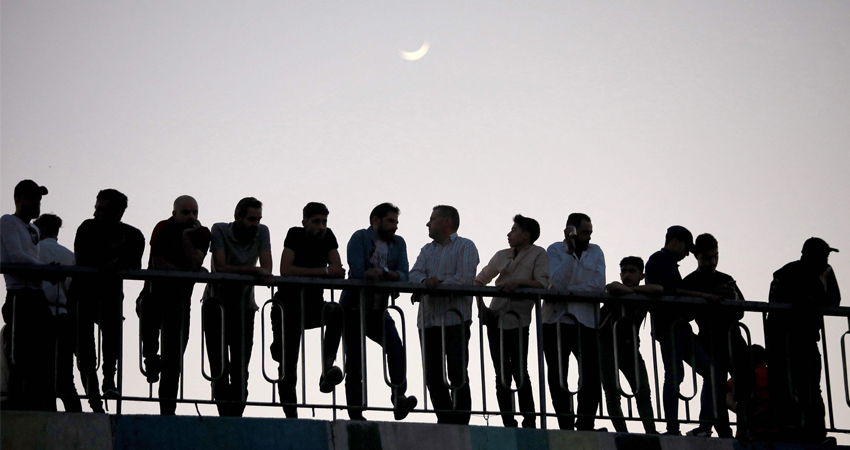 Syrian citizens await the release of their relatives who are detained by the Syrian government at "The President's Bridge" in the center of the capital, Damascus. May 2022. Source: News Agencies.

On 21 April 2022, Syrian President Bashar al-Assad issued Legislative Decree No. 108 of 2022 ordering the reconstitution of the Special Pardon Committee in Syria’s Ministry of Justice. The Decree was based on the Judicial Authority Law No. 98 of 1961 and the Syrian Code of Criminal Procedure No. 112 of 1950.

The newly formed Committee includes seven judges from the Ministry of Justice. The chief judge is Fouad Darwish, and the main members of the Committee are Muhammad Jamal al-Din al-Khatib, Ragheed al-Tutanji, Muhammad Maher Badawi, and Ziad Idris, as well as Mukhles Qaisiya and Yasser Ayyash, who deputize absent main members. The Committee was formed by a presidential decree in a structure provided for in Article 459 of the Syrian Code of Criminal Procedure.

It is noted that no female judges were included in the new Committee, which was formed nine days prior the issuance of the Amnesty Decree No. 7 of 2022.[1]

The reconstitution of the Special Pardon Committee only few days prior the issuance of the Amnesty Decree No.7 imply the intention of the Syrian government to review the pending death sentences referred to the Committee by the Minister of Justice.

Moreover, the new formed Special Pardon Committee will likely also review the pending death sentences made by the Syrian Criminal Courts. It is worth mentioning that on 21 October 2021, the dissolved Special Pardon Committee approved the enforcement of death sentences made against 24 convicts, some of whom were charged of arsons. The Committee referred to Articles 573, 574, 575, 576, 577, 578 of the Syrian Penal Code in its decision-making process.

Functions of the Special Pardon Committee and Competencies of the President

The Special Pardon Committee of the Ministry of Justice is a committee formed of five judges of the first rank, one of them shall be the chief, and they shall be appointed by a Presidential decree, such as Decree No. 108.

The Special Pardon Committee’s mandate is to review final death sentences referred to it by the Criminal Courts, after being certified by the Syrian Court of Cassation. This Committee does not have the power to assess the death sentences made by extraordinary courts, including Counter-Terrorism Court, military courts, and field courts, or to propose for the pardon of these sentences.

The President of the Republic is the one who appoints and dismisses members of the Special Pardon Committee. This means that the Committee is inevitably dependent on the President in all its functions, starting from the approval of the files to be reviewed and ending with enforcing or repealing death sentences.

The President of the Republic approves death sentences issued by the Military Criminal Courts in accordance with Article 89 of the Military Penal and Criminal Procedure Code, which states: “Once the Court confirms the death sentence, the case will be referred to the office of the presidency of the republic by the chief of general staff of the Syrian army and the armed forces, after adding his notes and consulting the Defense Council, whether to authorize the execution or not.

How to Apply for Pardons?

Theoretically, Article 460 of the Syrian Code of Criminal Procedure states:

“1. The request for pardon is sent to the President of the State either directly or through the Minister of Justice based on a form signed by the convict, his representative, or one of his family members.

However, in practice, being vague, the domestic laws are poorly understood by much of the Syrian people, which makes them unaware of their rights. Moreover, not all convicts can afford to hire a lawyer to follow their cases. That means that a mechanism is needed for informing those with final death sentences of their right to seek Presidential clemency.

STJ sees that the President of the Republic bears the greatest responsibility for the enforcement of death sentences given the broad powers he enjoys under Article 43 of the Penal Code and Article 454 of the Syrian Code of Criminal Procedure.

The Mechanism of Action of the Special Pardon Committee

Article 461 of the Syrian Code of Criminal Procedure states that “When the verdict of the death penalty is issued, the Minister of Justice shall immediately refer the papers of the case enclosed with the report of the prosecutor of the court which issued the verdict to the Pardon Committee. It will consider the case and give its opinion on the necessity of the execution of the death penalty or replace it with another penalty during five days at most.”. The Committee shall exercise its mandate impartially and independently without any influence from the Executive Branch.

After hearing the statement and seeing the papers, the committee shall consider the accusation and the evidence it was built on, the reasons for the request for a pardon, and the reasons for the enforcement of the death penalty or replacing it with another. It shall give its opinion unanimously or by the majority to accept the pardon request, or enforce the death penalty, or replace it with another based on a report submitted to the Minister of Justice.

It should be noted that the decision of the Committee is not binding so the President can adopt it or not; that is what relevant legislation provides for. The Committee does not accept the requests for pardon for penalties lighter than death sentences, except under a presidential order, in accordance with Article 462 of the Syrian Code of Criminal Procedure.

In case the President rejects the pardon request filed by convicts with a penalty of hard labor for life or with a ten years or more imprisonment sentence, the convicts with the “hard labor” sentences would be prevented from applying for a new pardon within the next three years, while those of the“imprisonment” would not be able to request pardons in the next two years. The prevention period starts from the date on which the convict was informed of the rejection of his first pardon,  according to Article 467 of the Syrian Code of Criminal Procedure.

On 21 October 2021, the Ministry of Justice announced on its official Facebook page the execution of 24 people over “acts of terrorism”. The death sentences against those convicts were reviewed by the Special Pardon Committee and then ratified by the Court of Cassation.

Those executed had been deprived of their right to appeal against their sentences, which were made summarily in violation of the 2012 Syrian Constitution in force, whose Article 51 Paragraph 3 states: “The right to conduct litigation and remedies, review, and the defense before the judiciary shall be protected by the law, and the state shall guarantee legal aid to those who are incapable to do so, in accordance with the law.”

We can conclude that the President of the Republic (head of the Executive Branch(has broad powers that allow him to interfere with the work of the judicial authority. The Syrian President headed the High Judicial Council and he is the one who appoints the members of the Constitutional Court and those of the Special Pardon Committee, contrary to what the current Syrian Constitution stipulates in its Article 132: “The judicial authority is independent; and the President of the Republic insures this independence assisted by the Supreme Judicial Council.” And Article 134: “1. Judges are independent and there is no authority over them except that of the law”. The President’s wide powers in the judicial area also contradict the Basic Principles on the Independence of the Judiciary adopted by the United Nations General Assembly in 1985.  The Principles affirmed that the independence of the judiciary shall be guaranteed by the State and enshrined in the Constitution or the law of the country. It is the duty of all governmental and other institutions to respect and observe the independence of the judiciary. 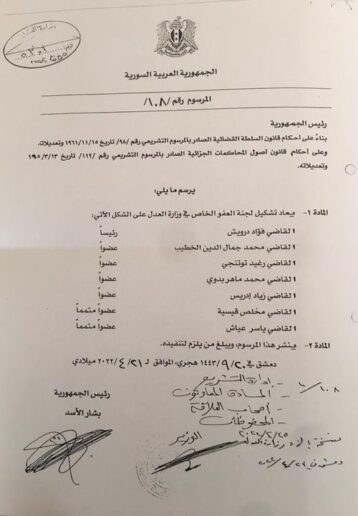 Image (1) – A copy of the Legislative Decree No. 108 on the reconstitution of the Special Pardon Committee.

[1] For further info on the Amnesty Decree No. 7, please see: “Syria: Amnesty Decree No.7 is an Inadequate Step Considering Law No. 19 and the Counter-Terrorism Court”, STJ, 25 May 2022, https://stj-sy.org/en/syria-amnesty-decree-no-7-is-an-inadequate-step-considering-law-no-19-and-the-counter-terrorism-court/ (last accessed: 3 June 2022).