Syria: Amnesty Decree No.7 is an Inadequate Step Considering Law No. 19 and the Counter-Terrorism Court

Amnesty Decree No.7 was issued on the eve of “Eid al-Fitr”, a few days following the leak of the footage of al-Tadamon massacre

After the issuance of Amnesty Decree No.7 in April 2022, thousands of families began waiting in spontaneous gatherings in several areas Damascus in the hope of seeing their loved ones released. This photo is one of hundreds of families waiting under the "President Hafez Al-Assad Bridge" in the center of Damascus. Photo Credit: Al-Sharq al-Awsat.

On 30 April 2022, the Syrian regime issued Legislative Decree No. 7 of 2022, granting a general amnesty for crimes of “terrorism” committed by Syrians before the date. The decree excluded the fatal crimes, included in the Counter-Terrorism Law No. 19 of 2012, the Penal Law issued by Legislative Decree No. 148 of 1949, and its amendments of 2011.

Article 2 of Decree No.7 states: “This amnesty will only drop the public but not the personal claims against offenders; those aggrieved still can file complaints to competent civil courts.” No legislative authority shall have the right to deprive victims from filing compensation claims.

Deputy Justice Minister, Nizar Sedkni, stated in an interview with the state-run Syrian Arab News Agency (SANA) that the amnesty includes Syrians convicted of various crimes, including working with terrorist groups, financing or training terrorism, manufacturing means of terrorism or disturbing security; and that the amnesty does not apply to terrorists who have arrived in Syria from around the world.

Crimes of Terrorism According to Syrian Law

Syria’s Counter-Terrorism Law No. 19 of 2012 defines an act of terrorism in its first article as: “Every act intended to create panic among people, disturb public security, damage the infrastructural or institutional foundations of the state, that is committed via the use of weapons, ammunition, explosives, flammable materials, poisonous products, or epidemiological or microbial instruments … or via the use of any tool that achieves the same purpose.”[1]

Notably, dozens of those released under the recent amnesty were arrested many years ago and had made appeals before the now dissolved Supreme State Security Court (SSSC), the predecessor of the Counter-Terrorism Court CTC, in accordance with the terrorism-related articles from the Penal Code (Articles 304 to 306).

What Acts of Terrorism and Crimes Against State Security are Not Covered by the Amnesty?

On 2 July 2012,  Syria’s President Bashar al-Assad issued Decree 20/2012, providing for the dismissal of any civil servant who is  convicted by a final court judgment after being proved to be involved in a terrorist activity as an author, instigator, accomplice, or accessory, or found guilty for joining a terrorist group and/or providing material or moral assistance to terrorism in any way (Articles 1 and 2).

In practice, this Decree was applied to workers in the private sector; STJ documented cases of workers in both public and private sectors who were arbitrarily dismissed and deprived of their pension rights, social security, and even their freedom. The dismissal of the workers were often under unfair sentences or malicious reports. Amnesty Decree No. 7 of 2022 does not address these workers and address these injustices, despite  difficult living conditions in Syria.

Moreover, Decree No.7 does not cover thousands of Syrians who were tried in present or in absentia for committing offenses against State security, under provisions in the Penal Code issued by Legislative Decree No. 148 of 1949 before amendments. The provisions include:

Decree No. 7 Will Not Put an End to Arbitrary Detention and Enforced Disappearance in Syria

Given that Syrian security services have unlimited powers, it will be difficult, and even impossible, for the Syrian judiciary to apply Decree No. 7 to tens of thousands of male and female detainees and forcefully disappeared people held by security services, including Military Intelligence/Military Security, General Intelligence Department/State Security, Air Force Intelligence, and Political Security Division. This is because these security services are immune from prosecution.

STJ believes that it is impossible for Decree No. 7 to free those held by the pro-regime Syrian National Defence and the armed militias active in Syria, such as the Iranian and Lebanese, since their prisons and detention centres are beyond the state’s control.

Furthermore, Decree No.7 does not define “fatal terrorist crimes”, leaving it open to the implementing authorities’ interpretations and jurisprudence.  If the implementing authorities had good intentions, they could narrow the scope of these crimes. As a result, most detainees and forcibly disappeared people would be freed, as they were arrested for reasons like criticizing the government, belonging to rebel areas, or for ransom purposes. Additionally, those who were arrested over alleged terrorist charges, who were participating in relief operations, providing medical aid, or writing in support of the uprising, would also be freed.

On the other hand, if we presume the ill will on the part of the implementing authorities, which is more likely, any anti-government act will be considered a fatal terrorist act and thus only a few detainees will benefit from the amnesty.

The passing of this amnesty decree should remind the public of the continued need to find the path towards eliminating arbitrary detentions in Syria. This path must begin by lifting the immunity granted to security services and subjecting them to an independent judiciary, which could lead to an inclusive political transition in Syria, and the return of rule of law.

A Subsequent Statement by the Ministry of Justice

On 5 May 2022, Ahmed al-Sayed, the Syrian government’s Minister of Justice, issued statement No. 6457 – in the context of implementing Decree No. 7 – in which he revoked search and arrest warrants issued against Syrians at home and abroad accused of committing acts of terrorism included in the Counter-Terrorism Law No. 19 of 2012. The statement excluded those who committed fatal crimes as well as those who continue to have links with terrorist groups or hostile States.

Such broad language made the statement vague and open to interpretation, which gives discretion to implementing authorities. It is possible for the latter to consider the hundreds of thousands of Syrians who work with civil society organizations and initiatives inside and outside Syria, which receive support from United Nations, European, and international bodies who are not considered “friendly” to the Syrian government, as collaborators with hostile countries. Even Syrians who obtained passports and residences from foreign countries after 2011 may be included.

Moreover, implementing authorities may include Syrians residing in areas outside the control of the Government, for example, the de facto regions of the Autonomous Administration of North and East Syria (AANES), among those linked to terrorist groups. 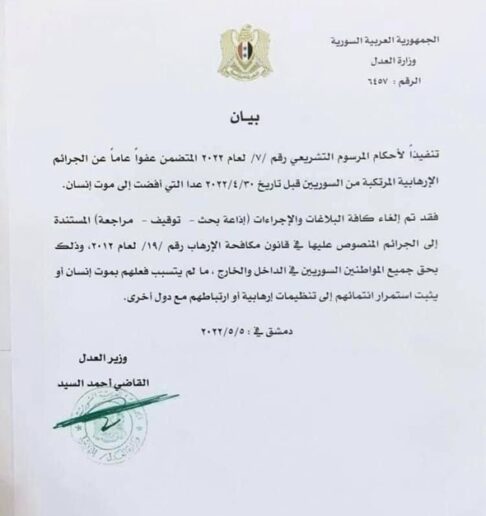 Image (1) – A copy of the statement issued by the Syrian government’s Ministry of Justice on 5 May 2022.

[1] On 2 July 2012, Syrian President Bashar al-Assad issued the Counter-Terrorism Law No. 19, then followed it up with Law No. 22 of 2012, establishing a special court, the CTC, to look into terrorism cases, based in Damascus. Legal experts identified several points of convergence between the articles of the newly established court and its precedent, the SSSC. For instance, Article 7 of the CTC Founding Law exempts the court from adhering to due process enshrined by the legislation in force, which applies to all stages and procedures of prosecution and trial, except for the right to defense. In other words, the Syrian authorities once again infringed on the defendants’ right to a fair trial by obligating the court overseeing their cases to a set of standards and rules of justice and fairness of fair trials. For more info, please check: https://stj-sy.org/en/syria-the-legacy-of-fayez-al-nouri-thousands-of-unjust-verdicts-against-baathist-agenda-opponents/