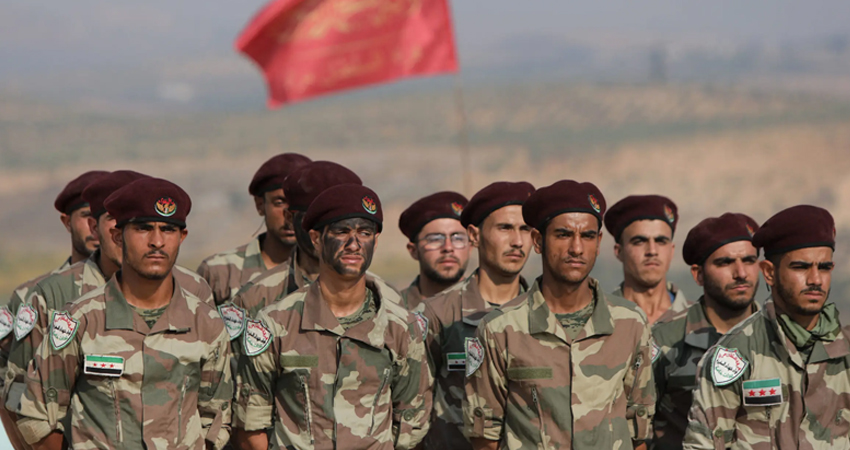 Mayhem gripped the Libyan capital Tripoli after local factions engaged in a new fit of clashes, described as the most violent in two years. This bout of warfare took a toll mostly on civilians, killing dozens and injuring hundreds, amid rising concerns of renewed armed conflict during the current political impasse.

Keeping tabs on the Syrian military presence in Libya, Syrians for Truth and Justice (STJ) corroborated that several fighters affiliated with the opposition’s Syrian National Army (SNA) partook in these clashes, acting on Turkish orders.

The obtained information also verifies that these fighters were involved in property looting during and after the battles.

Notably, at least 3,000 Syrian fighters, among them minors, remain deployed in Libya despite repeated international and UN calls to withdraw all foreign forces from the country, and repeated emphases that such a presence poses a grave threat to security in Libya and the region.

Syrian fighters were first dispatched to Libya over two and a half years ago. They were recruited to join combat as mercenaries alongside the two warring parties.

In late 2020, Turkey enlisted thousands of SNA affiliates to fight beside the Government of National Accord, opposite the forces of the Libyan National Army, under the command of Field Marshal Khalifa Haftar. In support of Haftar, Russia recruited thousands of Syrian fighters from areas controlled by the Syrian government.

The information STJ obtained demonstrates that deployed Syrian fighters maintain strong ties with local armed Libyan groups, and are taking up duties within these groups, including participation in looting civilian houses, imposing royalties on some shops, and pillaging others.

Seeking details on the 27-28 August clashes, STJ obtained exclusive first-hand accounts from two SNA-affiliated commanders. The commanders confirmed that Syrian mercenaries played an active role in the Tripoli battles and the ensuing lootings.

A commander of a sub-group within the Suleiman Shah Brigade (also known as al-Amshat) recounted:

“On the morning of August 27, SNA commanders alerted all the fighters in the Yarmouk camp, under direct orders from the Turkish officer supervising the camp. Then, they divided us into groups and dispatched us as support forces for the Stability Support Authority (SSA) and the Deterrence Apparatus. They told us that the forces of Khalifa Haftar had staged a coup against the Government of National Unity (GNU). A group was mobilized towards Zliten city, east of Tripoli, where a Haftar-affiliated militia was trying to invade the capital. I participated in an attack on a group led by a person called Haitem Tajouri. The group had its headquarters in Ain Zara town, and during the attack was stationed on the Tatanaki farm. We seized the group’s headquarters, vehicles, and ammunition depot. Also, we looted the entire contents of these structures.”

“We received information that Muammar al-Dawi, Company Commander of the 55th Infantry Battalion, led a coup against the GNU. So, military groups headed to the Warshefana area. However, al-Dawi decided to surrender upon seeing the military columns, on the condition that they spare Warshefana the attack. Next, we shut down all the military headquarters operated by the 28th Infantry Division, known as al-Nawasi Brigade, because they participated in the coup. We also seized one of the brigade’s business facilities, the Lido Summer Resort. Both Syrian and Libyan fighters looted the resort’s contents and then leveled the structure. After this, we controlled the headquarters of Osama al-Juwaili, former commander of the West military zone. We tried to capture him, but he managed to escape from Tripoli.”

Commenting on the role of Turkish forces, the commander noted that:

“Turkish drones did not participate in the attacks. Their role was limited to reconnaissance and providing information and coordinates to military groups. One Turkish officer said that the drones were tasked with surveillance only to give the forces involved in the coup the chance to retreat and surrender. Indeed, the forces immediately surrendered at the sight of drones, because they knew how precise and lethal they are. These drones come with high-resolution thermal cameras.”

“The Turkish commanders provided us with maps, locating the headquarters of all the divisions involved in the coup, and information about all their movements. During the attacks, most of the fighters surrendered instantly. However, we had some intense clashes with intransigent divisions. These clashes led to deaths and injuries among civilians.”

From the Sultan Murad Division, the second commander narrated:

“We participated in searches in the area south of Tripoli, which cost us massive efforts. With little resistance, we also controlled the 7th April Camp, run by Haitem Tajouri. The camp had a large depot for weapons and vehicles.”

“Fighting beside the SSA, I participated in the attack on the Radio Station on al-Sarim Street. The station was controlled by one of al-Tajouri’s commanders, al-Dilawe. Some violent clashes occurred south of Tripoli, during which several Libyan commanders surrendered, including the two nicknamed as al-Kilany and Khashibeh. All Syrian fighters were there as assist forces. They received instructions from the Turkish officers and acted fast.”

Elaborating on the use of Turkish drones, the commander said:

“The Turkish military used drones in the places where fighters refused to surrender. They also used drones in an extensive shelling on the al-Jwaili Camp and Gate 27, until they fell to their control.”

“Some major headquarters were controlled. Even though these headquarters had contents beyond imagination, Syrian fighters focused on stealing dollars, gold, and cellphones because ammunition and other goods were difficult to relocate, especially since the clashes were pretty intense.”

In a previous report, STJ obtained information that Syrian fighters who cooperated in combat with the SSA, al-Nawasi Brigade, and Brigade 444, also actively engaged in various violations against civilian property.

Syrian fighters stationed in and around Tripoli told STJ that Syrian mercenaries are involved in large-scale lootings of civilian houses, robbing their contents, including cash, gold, and furniture.

Additionally, the mercenaries converted several of the houses into military centers and housing units, while they vandalized and damaged others, coerced owners to abandon their properties, and seized them.

The violence in Tripoli prompted a response from the UN. On 2 September, the UN Secretary-General, António Guterres, appointed Abdoulaye Bathily of Senegal as his Special Representative for Libya and Head of the United Nations Support Mission in Libya (UNSMIL).

Bathily succeeds Ján Kubiš of Slovakia, who exited his position as Special Envoy and Head of UNSMIL in late 2021, as diplomatic efforts struggled to resolve the long-running Libyan conflict, following the country’s failure to hold general elections.