Turkey’s Recruitment of Syrian Mercenaries to Fight in Libya: Process and Legal Consequences

The Turkish government recruited Syrian rebels and civilians, including children, and sent them to Libya to fight alongside the GNA forces, under the leadership of al-Sarraj, against the LNA, headed by Haftar 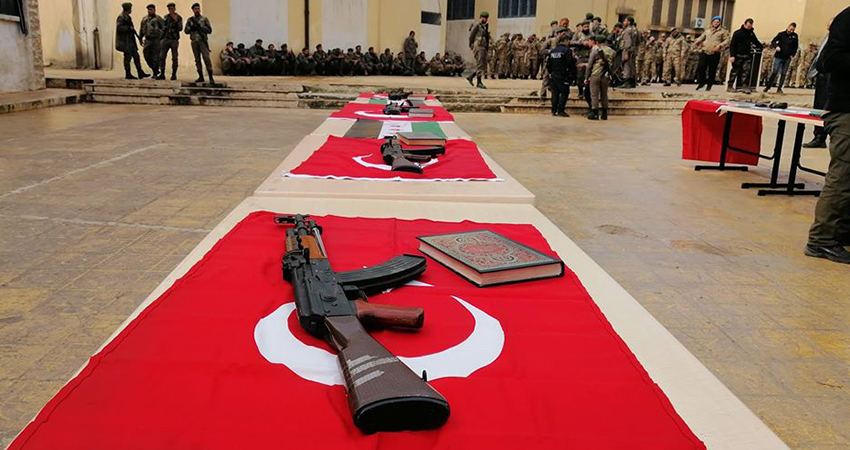 A side of the graduation ceremony of a new batch of police and general security forces in the National Army. Credit: Afrin Police Command’s Facebook official page.

I.      A brief history of the Libyan civil war

Turkey in Libya sounds like a bet in the making. The current military support Turkey provides to Libya’s Government of National Accord (GNA) and its prime minister Fayez al-Sarraj is not fortuitous. Not only is Libya a former province of the Ottoman Empire, it also represents a significant investment, both politically and economically.[1]

The two states have had a tumultuous relationship over the past decades, involving significant investments, particularly fruitful given Libya’s rich oil and gas reserves and the need for construction in the country that could amount to 16 billion dollars.[2] The relationship has had its fair share of awkward moments, such as the inflamed sermon given by General Gaddafi to Prime Minister Erbakan, accusing him of complacency with the West and advocating for the rights of the Kurds, but eventually proved essential to both countries, who never loosened their tights and signed a Maritime deal in November, thus triggering old disputes among Mediterranean powers.[3]

Today, Turkey’s presence in Libya is also the opportunity for Turkey to hamper the prominence of its rivals in the region, namely the United Arab Emirates (UAE) and Saudi Arabia. Indeed, the Libyan civil war has become the theatre of a conflict involving a number of actors. While Turkey supports the government recognized by the UN and led by the Government of National Accord (GNA) and its prime minister Fayez al-Sarraj, isolated on the international scene, the UAE, along with Egypt, Israel and Saudi Arabia is allied to General Haftar’s Libyan National Army (LNA).[4]

II.      First allegations of the presence of Syrian fighters in Libya

In this extensive report, Syrians for Truth and Justice (STJ) presents evidence, supported by witnesses’ direct statements, of Turkey’s recruitment of Syrians to fight in Libya alongside the Government of National Accord, under the leadership of Fayez al-Sarraj, and against the Libyan National Army, headed by the Field Marshal Khalifa Haftar.

Syrian news networks started publishing reports, denied by the Syrian opposition, of Syrian fighters sent as mercenaries to Libya in December 2019. Thus, on 25 December 2019, the Ministry of Defense of the Syrian National Army issued a statement in which it categorically denied sending any forces or military formations to Libya, stating: “Our priority in the National Army is to protect our Syrian people.” [8]

On 27 December 2019, a group of Syrians, whose members identified as revolutionaries, politicians and academics, issued a statement, deploring that Syrian fighters agree to be deployed outside Syria, when they are supposed to hold their arms in Idlib against Russian, Iranian and Syrian forces.[10]

In a phone call with Enab Baladi, on 28 December 2019, Ibrahim Bilrajab, the junta leader in the Government of National Accord in the Libyan city of Misrata, denied the arrival of Syrian fighters to Libya.[11]

In turn, the media office of the head of the Presidency Council in the Government of National Accord, confirmed that the circulated videos allegedly showing Syrian fighters in Libya were filmed in Syria’s Idlib.[12]

On 2 January 2020, Turkish Parliament ratified a memorandum submitted by the Turkish presidency in order to send Turkish forces to Libya, and to give them a one-year renewable mandate.[13]

On 12 January 2020, Sabratah Operation Room’s Facebook page, affiliated with the Libyan National Army forces headed by Field Marshal Khalifa Haftar, published a 14 minutes and 42 sec long video showing an individual captured in the town of Sabratah in Libya by illegal migration squad. The detainee is shown confessing his affiliation with the Suleiman Shah Brigade (also known as al-Amshat) in the Syrian National Army of the Syrian Interim Government operating under National Coalition for Syrian Revolutionary and Opposition Forces, and explains that he entered Libya on 8 January 2020 from Turkey with other Syrian fighters.[14]

İmage 1: areas of control in Libya as of 24 December 2019. The areas in red are under the control of the Libyan National Army, led by Field Marshal Khalifa Haftar while those in blue are controlled by the Government of National Accord, under the leadership of Fayez al-Sarraj.

III.      Methodology of the report

STJ monitored the transfer of Syrian fighters to Libya as soon as the first reports were published, collecting and analyzing dozens of written, video and photographic materials circulated on Syrian, Turkish and international media outlets.

For the purpose of this report, we met reliable and well-informed sources, in person and online, including three civilians, two of whom have administrative positions in the National Army, while the third works in the civil registry, run by Turkey in northern Syria. We also interviewed five fighters, three of whom are currently in Libya, and two others who declined offers to go there. In addition, STJ met the families of two fighters who were recently killed in Libya and the family of another fighter who is currently there. A civilian, who works as a barber and witnessed the preparation of children to fight in Libya was also interviewed.

Each of these interviews was conducted in a number of sessions through WhatsApp or  phone calls, between 10 and 28 January 2020, except for two conducted physically in the town of Marea in northern rural Aleppo, the first with the barber, on 16 January 2020, and the second with a fighter on 10 February 2020.

[4] Israel’s little-known support for Haftar’s war in Libya: With the help of the UAE, Israel is providing arms and training to the Libyan National Army, Middle East Eye, 15 April 2020, https://www.middleeasteye.net/news/israel-little-known-support-haftar-war-libya

[8] Affiliated with the Syrian Interim Government, the Ministry operates under the National Coalition for Syrian Revolution and Opposition Forces; “The Ministry of Defense in the “Interim Government” Comments on Sending Fighters to Libya”, Brocar Press, 25 December 2019 (last visit: 10 March 2020) https://brocarpress.com/وزارة-الدفاع-في-المؤقتة-تعلق-على-إرسا/