“They Spoke of Maktumeen with a Sense of Pity and Disdain”

The statement of Dawran Ibrahim Khalil, a Syrian Kurd denied nationality due to the 1962 special census 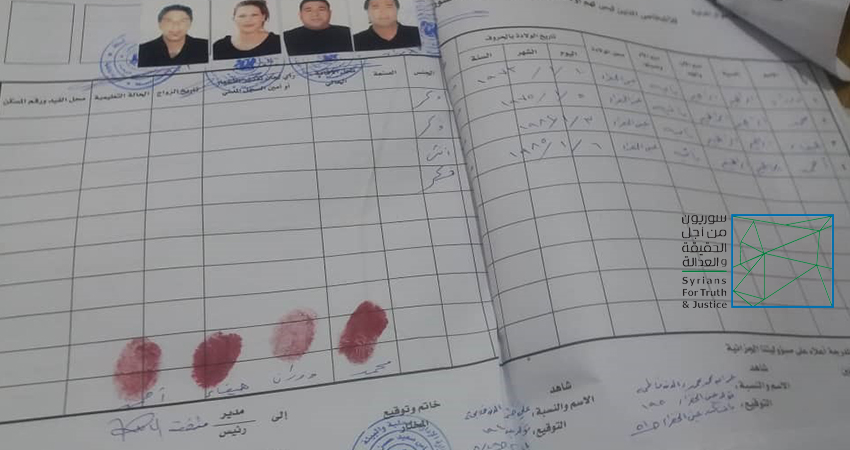 A photo of a Syrian civil record, where Dawran Ibrahim Khalil and his siblings are registered as maktumeen.

Being a maktum[1], Dawran Ibrahim Khalil failed to legalize his status and get the Syrian nationality even though 57 years separate him from the special census conducted back in 1962, under which tens of thousands of Syrian Kurds were deprived of the Syrian nationality and all citizenship rights. Dawran, along with his five siblings and many others of the same status, were thus abandoned to contemplate the dream of being naturalized.

Dawran Ibrahim Khalil[2], born in the town of Banah Kasri, near the al-Malikiyah/Dayrik district, in 1973, is married and works in the field of construction. He narrated to Syrians for Truth and Justice/STJ a short version of his story of suffering being a stateless Kurd:

“My father, ‘Ibrahim Khalil’, was a maktum, a problem which he passed down to us. We always said that we will become citizens, but these were mere words. When the Syrian government embarked on naturalizing the ajanib[3] in 2011, we started working on our documents, for back then we were told that they will start granting the nationality to the ajanib first and then comes the turn of the maktumeen[4]. We prepared our files and brought elderly witnesses, older than my father, so they can remember him very well. We, then, went to al-Hasakah, seeking the Age Determination Committee in particular. We obtained all the required documents and headed to al-Malikiyah/Dayrik, where we registered my parents’ marriage. It is important to mention that my mother is a citizen. Once again, we summoned elderly witnesses, who attested that my father is a maktum and so are his children. My father was suffering a stroke and could not speak. When we went to al-Hasakah to obtain the documents, we took him there aboard a van; he just lay down there. When ajanib’s affair was finalized, we applied our documents. A few problems broke out in Deir ez-Zor, several civil registries, migration and passport departments went ablaze. I am not sure what happened to these places, but the postal service of the governmental department ceased back then and many of the people’s documents were lost. We stopped pursuing the matter for a long time, for these documents were of extreme importance to us, as we could not bring the witnesses all the time or get the same signatures. We did not want to jeopardize the denouements in any way. Despite this, we repeatedly tried to obtain these documents, resorting to lawyers, but all the effort was in vain.”

In 2018, Dawran’s family tried to legalize their status once again; they contacted a lawyer, who kept their documents for about six months without being able to do anything. Counting the difficulties the family had to face owing to this situation, Dawran told STJ the following:

“Every time we went to Damascus, we were not allowed to stay at hotels. Our legal status was a major challenge. When yet a middle school student in al-Malikiyah/ Dayrik, there was a course concerned with military education, which included military training by the Syrian government. However, the teachers would tell us: ‘You, maktumeen, step away!’ They used to train citizens only. In addition to this, I could not register my marriage at the Syrian government departments. If I am to have children, I would not be able to register them or give them my family name. These are all obstacles hampering me and my daily life. To the day, the house I own is not registered on my name but on my mother’s because she is a citizen. I still remember that when a young man approached a girl’s family as to marry her, the family would ask if he is a maktum, ajnabi or a citizen. I heard such things myself. They used to say: ‘This young man is either a maktum or an ajnabi’ with an impeded sense of pity or condensation. This hurt me personally because it is a thing that can break a human being’s heart. It is an extremely bad feeling.”

Dawran’s family is stripped of all its political, economic and social rights owing to its legal status. His father has always dreamed of becoming a guard at one of the governmental departments, but being a maktum he lost all hope of achieving this modest wish. Commenting on this, Dawran added:

“As for education, I have managed to finish high school. However, being the family’s older son and considering our poor financial conditions, I had to give up on school to make a living. What helped me make that decision so fast was my status as a maktum, for even if I was to pursue my education to the last, it would have been to no use for me. I now work with one of my village friends in the field of construction in the city of al-Malikiyah/Dayrik.”

[2] The witness was interviewed by STJ’s field researcher in person in late September 2019.

[4] Following the onset of peaceful protests in Syria, which demanded sweeping reforms in the country, Decree No. 49 was issued on 7 April 2011, and has been announced on the official website of The Syrian People’s Council under the title “Granting Syrian Arab Nationality to those Registered as ajanib in al-Hasakah”. The decree states:

Several months after the issuance of Decree No. 49 of 2011, a ministerial decree of nationalizing maktumeen was reported. The Personal Status Department employees, however, told submitters that it was not yet in effect, and they actually didn’t know which department would take it over.

“Against all Odds, I will always Pursue my...

“They killed my child whom I endure so...