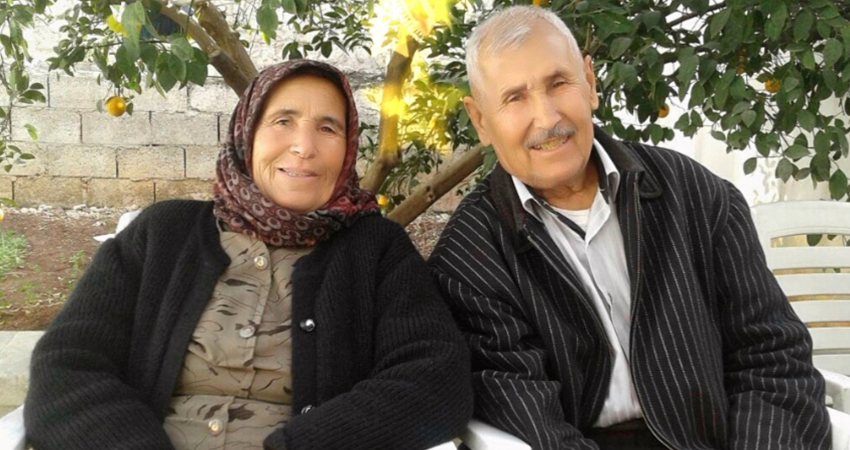 Houria woke up in panic to footsteps of strangers in her house at the midnight of August 25, 2019. Seeing them, the two men strangers drugged beaten and insulted Houria, after they had already strangled her husband to death. Barely a few days later, Houria died of physical and psychological pain.

Houria Baker and her husband Muhyiddin used to live in al-Ashrafia neighborhood in the Kurdish-majority city of Afrin, which is jointly controlled by the National Army of the opposition and the Turkish military.[1] The house of Houria and Muhyiddin is of an old style; it is a ground floor surrounded by a stone wall, no more than 1.5m height, and has yard which contains plants.

After a month’s investigation, the police have failed to determine whether robbery was the motive of the crime or not, as the living conditions for the indigenous people in Afrin recently became intolerable, which have led to criminal acts. After killing the husband and drugging and beating the wife, the perpetrators stole SP.100,000 (about $180 only) and some cheap items from the house, according to STJ field researcher, citing sources close to the family.

The crime scene was the victims’ house, which located behind Aisha gas station in al-Ashrafia neighborhood in the city of Afrin, which is under the de facto control of the Levant Front of the Turkish-backed National Army, and has a military base, only 1km. from the victims’ house. Most of the neighborhood residents are members of the Levant Front and their families and people close to them.

STJ field researcher interviewed several relatives of the victims and persons familiar with the investigations of the crime; one of the relatives recounts the circumstances of Houria’s killing saying:

“After midnight on Sunday 25 August, Houria woke up to movement of strangers in their home. She got up to find out who was there, and shocked to see two strange men. Immediately, the latter placed a narcotic substance on her nose, which left her anesthetized for about two hours. When she woke up, she found herself shackled, handcuffed and blindfolded. However, when she asked them who they were and what do they wanted, they started insulting, beating and kicking her severely despite her pleas to stop and consider her weakness and old age. Thus, she played dead and then they fled.”

“While pretending death she heard the perpetrators recounting the items which could be stolen from the house; a router, a gas bottle, a cell phone and an amount of SP100.000.”

Then, Houria didn’t know yet that her husband had been killed, as he was in another room.

Relatives of the victims recalled to STJ the traumatic moments Houria lived after the felons fled.

The interviewed relatives said that Houria remained pretending death until dawn, even after the criminals left the house. When people went out to mosques for the morning prayer, at about 5.00am., and she heard sound of motorcycles outside, she screamed for help, so two men went in, released her and left immediately without giving any further help.

Even after being untied, Houria couldn’t walk to look for her husband, as she used to walk on crutches, since she had pain in the legs’ joints. So, she started screaming again until two of her neighbors came and helped her getting to her husband’s room, where they found him murdered with the blood flowing from his head. That made one of the neighbors fainted. However, the neighbors informed the victims’ sons and the police about what had happened.

3. The Victims’ sons arrive before the police

Although police and security quarters are only 1km. away from the victims’ house, sons of the victims who live in the suburbs of Afrin- one of them lives in the town of Jindires- arrived before the police to the crime scene. A relative of the victims said:

“The victims’ daughter arrived to the crime site before the police did. She saw her father covered with blood which she wiped from his face. However, members of the National Army and the Turkish forces came to the crime site; photographed and fingerprinted it. Shortly after Civil Police members and Turkish officials arrived to the victims’ house; they lifted fingerprints from all over the house and took those of the dead man’s daughter and wife. They also examined the body and moved it to the military hospital, where the doctors confirmed that the man had been stabbed with a sharp object in the head that caused him to bleed, but the main cause of death, however, was strangulation.”

Another relative of the victims confirmed that the main cause of death was strangulation, cited the post mortem report which was taken from the victim’s family by Turkish forces members, without knowing why. The police stated that they had arrested five suspects, but after more than a month of investigations, no results were revealed and no answers provided to the inquiries of the victim’s relatives about the crime.

Houria Mohammad Baker after being beaten by unknown persons, who broke into her house in Afrin; robbed it and killed her husband.

4. The death of Houria following the incident

Houria used to suffer from heart troubles and walking difficulties before the incident, and after being beaten she suffered pain in all her body. She no more could digest food and drink, so her relatives took her to the military hospital/Afrin Hospital, where the doctors diagnosed her with minor bruises and she stayed for one day.

Houria’s family didn’t satisfied with that diagnosis, since the pain was severe. So, they took her to a traditional healer who diagnosed her with broken ribs and put her a splint. Her condition improved slightly and she was able to eat again. However, Houria moved to live with her daughter five days after the crime.

At dawn on September 6, 2019, Houria’s relatives rushed her to Dersem Hospital because of a sudden drop in her blood pressure, but the hospital didn’t admit her, citing lack of doctors.  She then was taken to the military hospital and she died there.

[1] In a report released on August 2, 2018, the AMNESTY described the Turkish presence in Afrin as an occupation. For more info see: “Syria: Turkey must stop serious violations by allied groups and its own forces in Afrin”, AMNESTY, August 2,2018. (last visit: August 2, 2019) https://www.amnesty.org/ar/latest/news/2018/08/syria-turkey-must-stop-serious-violations-by-allied-groups-and-its-own-forces-in-afrin/.