“Against all Odds, I will always Pursue my Aspirations”

The statement of Aheen Khalaf Oussi, a Syrian Kurd deprived of nationality due to the 1962 census 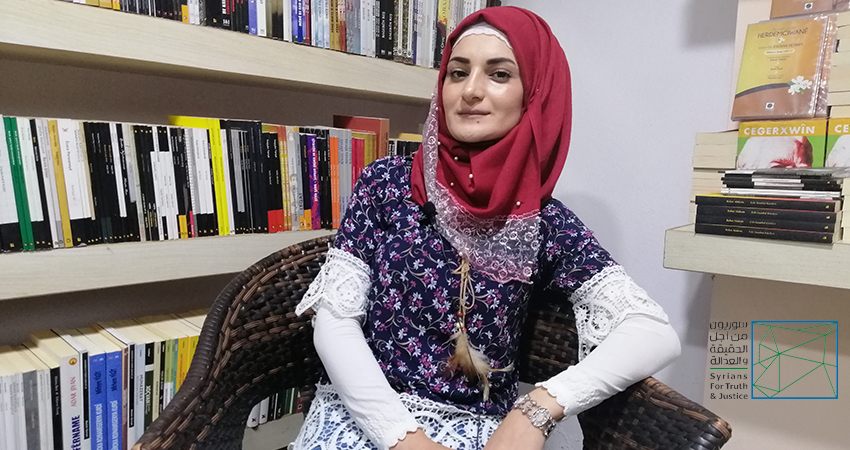 Being a stateless, maktuma, makes it impossible for her to obtain any education certificate. Still, Aheen Khalaf Oussi insisted to complete her secondary and university studies. Despite the lapse of 57 years, Aheen continues to suffer the consequences of the 1962 special census, which stripped tens of thousands of Kurds, including her family, from their nationality.

Aheen Khalaf Oussi, who was born in Qamishli/Qamishlo in 1994, recounted her sufferings to STJ saying: [1]

“My father is a stateless maktum, while my mother holds the Syrian nationality. My civil status caused me a great suffering, as it brought me through numerous difficulties especially in the course of my studies. And so were my brothers, the matter which prompted them to drop out of school at an early age. But I insisted to continue and pursue my dream of studying in the Faculty of Agriculture, though I hadn’t got certificates when I finished the preparatory and the secondary levels. Even after I completed my university studies, they didn’t give me a graduation document, saying that the maktumeen don’t have the right to study. Being a stateless also hinders my daily activities, as when passing a checkpoint, I always have to present my student ID, in order not to be questioned or arrested, since the soldiers there don’t recognize the identification certificate I hold. However, after I graduated, I got depressed because I didn’t know what to do then, since the only proof which I may get is a ‘graduation document’, which doesn’t allow me to access the government employment, but I might be able to get a job in one of the Autonomous Administration’s institutions.”

Aheen’s family has made numerous attempts to obtain the Syrian nationality, during which they paid large amounts as bribes and to lawyers, but to no avail. Aheen added:

“When Decree No. 49 issued in 2011, we prepared the needed documents and went to Personal Status Department to submit for the citizenship. But the employees there told us that the decree was intended only for the ajanib[2].  Before one or two years my father resumed following the case; we still have hope. All of my father’s family members are citizens except him, because he didn’t perform military service, as parents used not to register their sons for not to be summoned for military duty, and we, sons and daughters, have paid dearly for that. As for my father, since the 1980s he has been trying to resolve his status but to no avail. He has knocked on many doors, and every time they gave us hope, we got disappointed.” 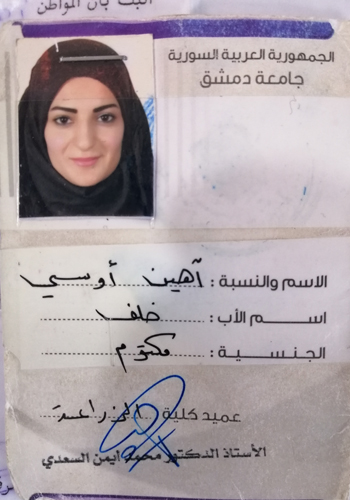 Aheen added that the greatest difficulties she has faced as a maktuma were in the course of her university studies:

“I was studying in the university of Aleppo and then transferred to that of Damascus, and while doing the due procedures, my university documents lost in Aleppo university. Therefore, I grant a power of attorney to a friend, using my university ID, since they reject my identification certificate citing not recognized. However, my university documents were later found and sent to me, but the university of Damascus didn’t recognize them and refused to register me. The employee said: “If you don’t bring your secondary school certificate, I won’t register you”. I showed her the “no objection” certificate but she even didn’t recognize it. That day, which was a rainy and snowy one, I had an exam but they didn’t allow me to do it despite my pleas and vows to complete the required documents the next day. Thus, I let my matter for Allah and went to Damascus University Head Management and there they told me to go to the Ministry of Higher Education. Indeed, I went there, but they said that they couldn’t help. So, I went to the Ministry of Education, and finally they gave me a university ID with ‘maktuma’ written next to ‘nationality’.”

Aheen recalled an awkward position she was put in as a maktuma:

“One day, while on my way to university, a checkpoint of the Syrian government stopped the bus I was in, and one of the soldiers began repeating “you who still hiding your ID, get it out now”; he meant me. I got really angry and told him that I’m maktuma. He said, “Is it possible that there are still maktumeen in Qamishlo? It seems that you do not want to get IDs.” I replied: “who is that who does not want to obtain an ID”. However, He didn’t believe me until I showed him my university ID.”

[1] The witness was interviewed face to face by STJ field researcher on September 10, 2019.

[2] Following the onset of peaceful protests in Syria, which demanded sweeping reforms in the country, Decree No. 49 was issued on 7 April 2011, and has been announced on the official website of The Syrian People’s Council under the title “Granting Syrian Arab Nationality to those Registered as ajanib in al-Hasakah”. The decree states:

Article 3: This decree shall enter into force on the day of its publication in the Official Journal.
Several months after the issuance of Decree No. 49 of 2011, a ministerial decree of nationalizing maktumeen was reported. The Personal Status Department employees, however, told submitters that it was not yet in effect, and they actually didn’t know which department would take it over.
For more info read: “Syrian Citizenship Disappeared”, STJ, September 15, 2018 (last visit: October 1, 2019)  https://stj-sy.org/en/745/.

“They Spoke of Maktumeen with a Sense of...

“They killed my child whom I endure so...