Home Written Stories “They killed my child whom I endure so much pain to protect, till the last moment before liberation”
Written StoriesEditor’s PicksStories & Testimonies

“They killed my child whom I endure so much pain to protect, till the last moment before liberation”

The story of the Islamic State Yazidi survivor ‘Khanaf Uthaib’ 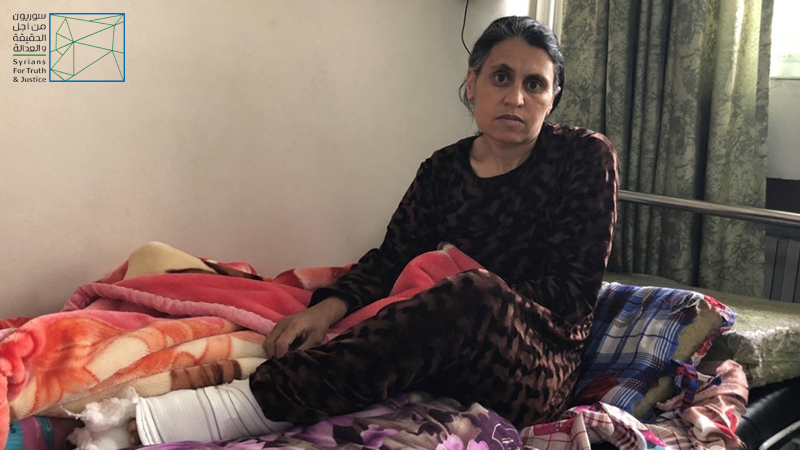 Khanaf Uthaib, 30, didn’t seem to be happy, despite the fact of being broke free of the Islamic State’s (also known as Deash) compulsion after four years of bitterness. As she was held captive as a slave with her child by fighters of this extremist organization. How can she be good after seeing her child Mitan Ismail, 10, dying in front of her eyes during their flight from the town of Al-Baghuz, in rural Deir Ezzor, specifically on March 19, 2019.[1] She didn’t imagine to lose her child when she was only steps away from the long-awaited freedom. IS fighters targeted them along with other Yazidi women with a rocket-propelled grenade prior to their arrival into the Syrian Democratic Forces (SDF) areas, killing her youngest son, for whom she endured all the oppression and sorrow during their captivity, and injuring her severely in the leg.

Khanaf showed signs of fatigue while sitting on her bed at the Roj Hospital in the city of Ras al-Ayn/Sari Kani in the province of al-Hasakah, where STJ researcher met her on June 15, 2019 to hear her story. She recounted to him in grief saying:

“I was living a simple life with my husband and three sons before IS stormed our village in Iraq’s Sinjar District in August 2014. They killed my husband in cold blood and my two sons disappeared. What future is there for me? I can’t forget the trying times I went through. I will go back to Sinjar to look for my children. I am hopeful that they are still alive.”

According to STJ field researcher, among those civilians who fled the town of Al-Baghuz there were many women and children who had been kidnapped from the Sinjar District/Shingal and its surroundings, specifically in August 2014.

1. I was living a simple, happy life with my husband and children

Khanaf Authaib was born in 1989 in the village of Kocho, Sinjar District. She grew up in her village, whose population depends on agriculture and animal husbandry for its livelihood. She got married right after high school, at the age of 18, to Ismail Mahal, who hails from the same village.

Khanaf lived with her husband and three children a simple and happy life. Two of her sons used to attend elementary school, while her husband used to work in agriculture. That was their conditions until August 2014. When IS entered the Yazidi majority district of Sinjar, her life turned upside down; her husband was killed, and she lost two of her children.

2. They killed the men in cold blood and held captive women and children

Under the rule of IS, Khanaf ran through a course of horrible incidents which she will never forget.[2] IS fighters held women and children captive and killed many locals including her husband Ismail Mahal, 35.

Khanaf described the great tragedy she endured from the acts of the extremist fighters of IS, who initially killed dozens of Yazidi men, including her husband, before the eyes of their wives and children, she said:

“When IS entered Sinjar we tried to flee our village of Kocho towards the city, but IS fighters got in our way and held us captive. They killed all of the men in cold blood, including my husband Ismail Mahal, and relatives of me. They also held all the women and children. All I remember was that I was held captive with my younger son, Mitan Ismail Mahal (5 years old), cousin, my mother-in-law, along with all the women, girls and children of my family. While my two other sons were kept in another place; and I haven’t seen them since then.”

3. I heard screams of girls being raped in neighboring rooms

Khanaf recalled the difficult and rough moments she had lived with her child along with hundreds of Yazidi women and children after being transferred to the Iraq’s Tal Afar district by IS fighters. During that period, she was severely insulted, beaten with whips and sticks, and deprived of food and drink for long periods at the hands of the IS extremist militiamen. In this regard, she went on to say:

“We were initially transferred to a school in Tal Afar, where the old women were separated from the girls. I was taken with the girls to rooms in the basement. Fortunately, I wasn’t raped, but I was severely beaten many times because I asked for food to my little son, since we were denied food and drink for days. We were constantly insulted by IS fighters for being ‘infidels’, as they used to call us. Then we were taken to Mosul.”

Tal Afar was the main destination for IS fighters to round up the Yazidi women and girls they captured, and it was the last IS-held pocket, which the Iraqi government forces managed to retake in August 2017.[3]

Khanaf spent rough seven months of detention with her child in Iraq and was constantly transferred between Tal Afar and Mosul, before IS fighters transferred her to Syria, specifically to the city of Raqqa, in March 2015, where she remained for about two and a half years. She detailed STJ about what she had seen in Raqqa, saying:

“In March 2015, I was sold in the slave market in Raqqa, where a Saudi IS fighter, Abu Muaz, bought me. He enslaved me. I worked in his house as a maid; cook for his family, clean the house, take care of his children, and did everything they asked me to. Me and my child used to eat their food waste. Besides, I was constantly insulted by his wife, who would describe me as an infidel and say that I should pray and fast until I make amends for my sins. I put up all this, so that they would not separate me from my little son.”

Khanaf still aches when remembering the repetitive sale of Yazidi women in the slave market in Raqqa. Her cousin and two of her friends were among the young women who were sold several times, they also underwent sexual and psychological violence, prompting one of her friends to commit suicide, after IS fighters took turns raping her, until she suffered severe bleeding, as the survivor said.

With the start of military operations led by SDF with the support of the international coalition, to control the city of Raqqa, and specifically on June 6, 2017, IS transferred Khanaf and her son to the town of Al-Baghuz in rural eastern Deir Ezzor, where she remained a maid at the house of the Saudi man Abu Muaz. She recalled some moments of those days saying:

“After we were transferred to rural Deir Ezzor, Abu Muaz’s wife, a 30-year-old woman from Raqqa, Syria, started treating me even worse. She used to beat me in front of my little son, and always justified it to her husband that I didn’t obey her, but that was completely untrue.”

5. Rockets’ fragments were fallen from everywhere

Khanaf remained in the town of Al-Baghuz, east of the Euphrates River, which was the last stronghold of IS in Syria, for more than a year and a half, before the SDF launched a campaign to take control of the town, on February 9, 2019, which resulted in declaring the expel of IS from all Syria on March 22 of the same year.

The survivor described the situation in the town of Al-Baghuz before leaving it as dire.

“The town of al-Baghuz lacked the most basic necessities of life. We denied access to food, while the IS fighter had plenty of it. At that time the international coalition intensified its air raids on the town, as rockets were fallen day and night and the shrapnel were all around. We were overcome by terror.”

6. They killed my child right before my eyes

Khanaf looked sad and pale; her eyes were filled with tears while she was recalling her flight of liberation from IS, which cost was significant, for what she termed. As her child was killed and she got a serious injury in the leg.

“Abu Muaz didn’t allow me to flee the town of Al-Baghuz, and he threatened to kill my son if I tried to, but as the fighting in the town came to an end, he told me to go wherever I want. On March 19, 2019, the SDF gave IS fighters two hours to surrender. They let the civilians out, so I fled with my son, my uncle’s daughter, and a friend of mine. It was a suitable time to escape since IS fighters were busy fighting. But unfortunately, they learned about our escape, so they targeted us from the top of the mountain with a rocket, killing my child for whom I endure pain till the last moment. My cousin and friend helped me reach SDF-held areas.”

SDF fighters transferred Khanaf to Roj Hospital in the city of Ras al-Ayn/Sari Kani, al-Hasakah, where she was treated surgically and physical from a leg nerve cut caused by a shrapnel. The Yazidi House of the Autonomous Administration will be responsible for taking her back to her hometown in Sinjar later.

Head of the Yazidi Abductees’ Affairs’ Office in Iraqi Kurdistan Hussein al-Qaidi disclosed on March 28, 2019 the release of 45 women and children Yazidis from Syria since the beginning of the year, and that there is no information available about mass graves containing Yazidi women in the town of Al-Baghuz, as the Office’s task force in Syria found no physical evidence.[5]

[2] “IS enters Sinjar and raises its flag over the city building”, Kitabat, August 3, 2014 https://kitabat.com/news/داعش-يدخل-سنجار-ويرفع-رايته-فوق-قائمقا/.

“They Spoke of Maktumeen with a Sense of...

“Against all Odds, I will always Pursue my...