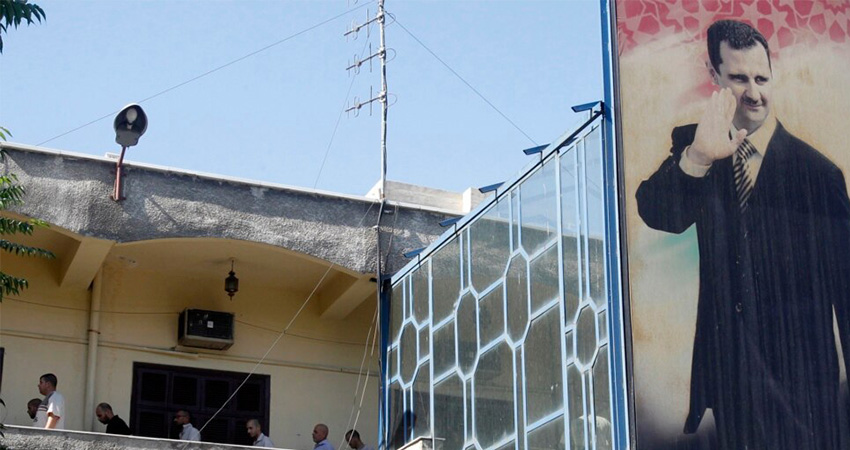 Syrian detainees, who were arrested for participating in protests against Syrian President Bashar al-Assad's regime, are seen at a detention facility in Damascus. Photo Credit: Reuters.

Although amendments usually aim to explain and simplify, some of the recent amendments by the government further obscured some of the legal terms that were already ambiguous and whose purpose was already difficult to define by specialists and lawyers, in addition to increasing fines accompanied with many other penalties.

The new amendments created brand new charges that never existed in any of the Syrian legislations, which indicates a deliberate intention by the Syrian authorities to expand the scope of groups to be prosecuted under those new legislations, especially citizens with different opinions or those opposing to the narrative of the Syrian Government.

Most Prominent Amendments of the Syrian Penal Code

The new law no 15 of 2022 made amendments of some legal terms of the “ordinary criminal penalties”, well-known to Syrian lawyers, such as the penalties of death, hard labor in perpetuity or for specified period, etc. Accordingly, we can understand the following:

With these amendments, it is harder now for people unspecialized in laws to differentiate between the concepts of “felony” and “misdemeanor”, adding more ambiguity to the law itself, and making it more difficult for common people to understand these laws and the included penalties that may affect them.

In addition, the terms “Habs” (imprisonment) and “Sijn” (prison) are used interchangeably by Syrians unspecialized in laws which both have a common meaning, per the Syrian Penal Code, of “depriving people from their freedom because of acts that constate criminal offenses”, creating clear uncertainty in understanding criminal legislations for wide groups of Syrians.

What is the Difference Between the Penalties for “Hard Labor” and “Imprisonment”?

The “hard labor” penalty, whether in perpetuity or for a term, is a criminal penalty that impedes freedom, i.e., the perpetrator must do works requiring physical effort based on their sex and age, such as digging roads, extending railway, stone quarrying, crushing, and transporting.

Notably, Law No. 15 did come not up with real amendments or change regarding the “hard labor” penalty because this penalty, whether in perpetuity or for a term, was already not applied. Prisons in Syria were not well prepared to force people sentenced with this penalty to work, as hard labor requires guarding prisoners and special security procedures that may be exhausting for prison management and other security bodies. Fortunately, sentenced people were not coerced to labor because the aim of the penalty is reformation, to deter the criminal from doing such crimes in the future and rehabilitate them to be positive members in community, and not humiliation or retaliation. Still, some prisons made sentenced people to do errands in the prison such as cleaning.

It is well known for Syrian lawyers that there were two types of hard labor penalty before amending it with Law No. 15 of 2022:

The penalty of imprisonment, categorized as a misdemeanor penalty per the former penal law no 148 of 1949, has three types,

Unfortunately, article 45 of the penal code remains almost the same even after the new amendment. Only the phrase “hard labor” was deleted, “sentenced persons must do works based on their sex and age, inside or outside prison”, which may be interpreted as free work as a form of punishment. The article should have included Syrian laws that regulate such work in terms of hours and remuneration, per article 71 and other “Standard Minimum Rules for the Treatment of Prisoners” issued in “First United Nations Congress on the Prevention of Crime and the Treatment of Offenders” in 1955 and endorsed by the “Economic and Social Council” in 1977.

The new law No. 15 of 2022 increased manifold the minimum and maximum limits of all types of fines (preventive, misdemeanor, or felony) accompanying penalties.

It is believed that one of the reasons that pushed the Syrian government to increase fines to millions in the recent amendments is the depreciations of the Syrian pound and its purchasing power, that caused, as a result, lack in financial resources and incomes. The same reason explains why the Syria government passed strict financial regulations to fill the gaps in finance and economy.

Noticeably, this amendment has a semantic and technical indication (widened scope of meaning) by replacing the crime of “weakening national sentiments” with “undermining the national identity”, knowing that the verb “undermine” covers widely broader meanings that the verb “weaken.”

Above all, the new law used the phrase “spread of despair and vulnerability among people of society” (article 11, law 15 of 2022) instead of “weakening the national moral” (article no 286, former penal code), to include much more acts by Syrians, raising questions about such acts. Can we consider, for example, discussions about the dire economic conditions in Syrian Government areas a factor that “spreads vulnerability in society”? or can we think that jokes about the inability of the Syrian Government to repel Israeli attacks on Syrian territories “enhance the image of a hostile state” (article 12, paragraph 2)?

Accordingly, these amendments further restrict freedom of expression, reflecting the tendency of the Syrian government to silence people and suppress this hardly existing right/freedom.

Furthermore, it must be understood that these amendments go in line with the recent cybercrime law that supports the government’s policy in shrinking spaces of freedom and tracking citizens using local legislations and mistrial circulars. Specifically, it targets those citizens who are upset with the performance of executive authorities as it relates to their abilities to meet their basic needs, but as their access to water, power, and fuel.

The Syrian legislator thus expanded the concept of “the state financial standing” and imposed penalties of anyone who undermines, in any way, the status of the state, whether the financial, social, cultural, historical, or other.

Moreover, the criminal procedures and charging decisions in most countries must define an unmistakable criminal act. Can discussions about high prices and dire living conditions therefore be seen as a way of undermining the state’s financial standing?

The Creation of New Accusations and New Crimes

The new law introduced and added crimes that did not exist before, for example, the penalty of imprisonment of not less than a year for any Syrian who wrote or made a speech calling up to tear away or cede part of the Syrian territories. (Article 13, paragraph 15, law no 15 of 2022).

Accordingly, we can infer that the used phrases in the recent amendments are already broad and put residents in government areas under the rule of executive authority. Such legislations are likely to open the area for corruption and bribery for all of those in charge of law enforcement such as the members of the security and police services, judges, and court officials because they can be interpreted at the whim of the person in charge of the case without supervision or reference to a specific regulation.

On the other hand, these vague phrases contradict the guidance document for legislative drafting issued by the prime minister in a decision on May 2019 that mentioned in many places the need for clarity in legislator drafting and avoidance of terms that causes uncertainty and ambiguity, clearly stating it in its second chapter :“Every legal statement must be accurately adjusted to avoid uncertainty and mistakes in laws execution and interpretation.”

It is most likely that the crime of calls “to tear away part of the Syrian territories” is a ready accusation for leaders of the self-administration in north-east Syria, for example, in relation to their speeches about decentralization. Also, arrest warrants or judgments in absentia may be issued against them to extort them for political or financial concessions.

The amendments in Law No. 15 of 2022 imposed stricter penalties for carjackings by inserting the penalty of imprisonment (felony) for not less than five years for anyone who steals a car and increased the accompanying fine from three to six million SYP.

Also, stricter penalties were imposed for anyone who steals a regular car license plate or uses a stolen regular car license plate, of imprisonment with work (misdemeanor) of one to three years with a fine from one hundred to five thousand Syrian pounds whereas the penalty was one or two year-imprisonment with a fine from two to four thousand SYP.

The fine was also increased for anyone who uses a mean of transport without intending to steal it up to three to five million Syrian pounds, in addition to the imprisonment for a term penalty (felony). However, if the perpetrator returns the mean of transport within three days without any damage, the penalty is decreased to imprisonment with work from one to three years (misdemeanor) with a fine from one hundred to five hundred thousand SYP.

Notably, the recent amendments of the penal code come in the same context of the recent cybercrime law no 20 of 2022. It is thought that one of the reasons for passing such laws is the recently increasing rate and intensity of criticism against the Syrian government, ministers and officials on social media and in daily discussions of Syrians about the poor living conditions and inability of the government to meet their basic needs such as access to power, water and even bread in its areas of control.

Moreover, passing this law in Syria most likely creates a risk for anyone expressing their opinion. Thus, the Syrian government is sending a clear message to Syrians that anyone who criticizes the government “state” and officials during this stage will be liable to prosecution.

This law forms a restriction of the freedom of expression and contradicts article 42 of the enforced Syrian constitution of 2022 stating that, “freedom of expression is protected by the law and every citizen has the right to freely and openly express his views whether in writing, orally or by all other means of expression”.