In the midst of a global food crisis and reports that stolen grains are being sold by Russia, Syrians for Truth and Justice shares concerns about growing humanitarian needs and calls for the respect of people’s right to food 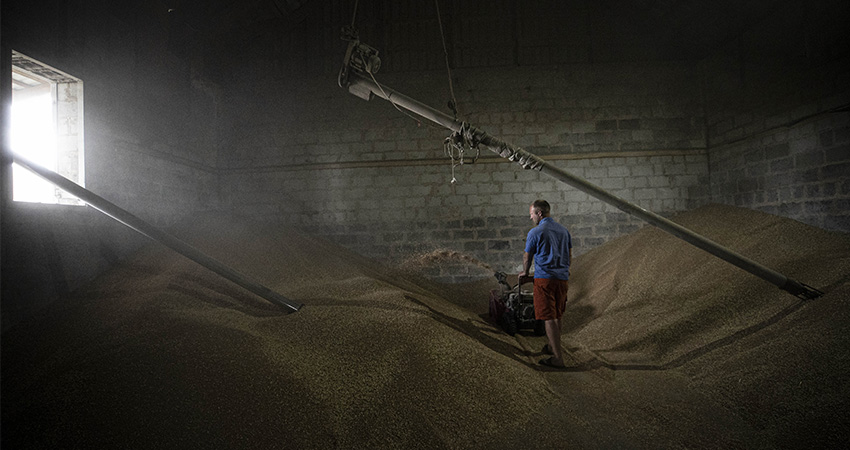 In the wake of the global food crisis, STJ is concerned about reports that stolen grains are being sold, potentially contributing to food insecurity. The ongoing war in Ukraine puts threats on global food security as both parties involved together represent more than a quarter of the world’s wheat exports. Documented destruction of grain storage in the fertile cradle of Ukraine is prompting the UN to re-open shipping routes from Black Sea ports, especially Odesa, to mitigate the food crisis and to allow Ukraine to sell its remaining twenty-eight million tons of grain. Ensuring shipping routes and monitoring Russian’s stolen shipments is therefore vital to maintain food security globally.

The Ukrainian government is accusing Russia of stealing up to half a million tons of Ukrainian wheat which amount to a worth of $100 million since February. An estimated $15 million to $20 million worth of agricultural machinery has also been allegedly stolen according to deputy minister of agrarian policy and food Taras Vysotsky. Ukrainian Ambassador Vasyl Bodnar also stated that the grains were shipped to foreign countries, including some countries under Western sanctions. US officials have confirmed that, on May 16, shipments were sent to fourteen countries, mostly in Northern and Eastern Africa, in addition to Pakistan, Bangladesh, Turkey, and Sri Lanka. Although it is difficult to attest the provenance of the grain, one indication might be that Russia is selling at a heavy discount. The Ukrainian embassy in Beirut already stated that Russia allegedly sent to Syria some 100,000 tons of stolen wheat. This reflects the dependence of most of these countries on imports for their food requirements and the scale of the need for humanitarian aid, Turkey for instance is a heavy consumer of Russian and Ukrainian wheat exports, with 74% of its imports in 2019.

Following Bodnar’s accusation that Turkey bought stolen crops, he stated that he will work with Turkey and Interpol to find the individuals responsible for this acquisition and that, under Turkey’s initiative, both countries will be launching criminal cases. Corroborating this accusation, investigations led by STJ in 2020 confirmed that stolen Syrian crops were sold to Turkey through the Turkish Grain Board/Toprak Mahsulleri Ofisi/TMO. The crop sales were conducted directly by commanders of armed Syrian opposition groups or the al-Sanable Company, run by al-Jabha al Shamiya/ Levant Front.

Between April and August 2020, testimonies and information obtained by STJ corroborated that during Operation Peace Spring, 12 incidents of crop thefts and confiscation, as well as six incidents of forcible expropriation and seizure of lands, occurred across Ras al-Ayn/Serê Kaniyê and Tal Abyad. The confiscation of over 17,000 dunums, including wheat, barley and corn were perpetrated by six of the chief armed groups operating under the opposition-affiliated Syrian National Army (SNA). This abuse affected local landowners, targeting either residents of the area or internally displaced persons (IDPs). While those violations were not directly committed by Turkey, as an occupying state, it is to be held responsible for the groups and individuals operating on the ground based on its instructions.

As Turkey is taking on a mediating role in reopening the Black Sea ports to mitigate the export corridor, its acquisition of looted crops of grain is directly contributing to the global food crisis and specifically affecting civilian populations subjected to warfare.

In light of this new information, Syrians for Truth and Justice: