The two armed groups exchanged fire on 13 February 2021 because of a smuggler. The fight killed civilians and inflicted damage on nearby shops and houses

Fighters of the Jaysh al-Islam/al-Islam Army during training in December 2020. Credit: The Army’s Telegram channel.

On 13 February 2021, Afrin city witnessed violent armed clashes with light and medium weapons between the al-Jabha al-Shamiya/Levant Front and the Jaysh al-Islam/al-Islam Army (hereinafter the Army and the Front)—two armed groups affiliated with the Turkey-backed Syrian National Army (SNA). The clashes killed two civilians and a fighter and injured seven other fighters from both sides. The violent exchange also materially damaged shops and civilian homes.

Tension still dominates the city’s atmosphere even after the clashes halted, with the two armed groups urgently summoning reinforcements in an attempt to extend their influence over the region.

Afrin region, particularly the city of Afrin, has been in the throes of rampant insecurity since the armed opposition factions of the Turkey-backed SNA took power in the region. For instance, a confrontation between enraged civilians and the fighters of the al-Hamza/al-Hamzat Division in May 2020 exposed one of the division’s unknown detention facilities. There, a group of women, mostly Kurdish, were held captive and secret by the division. The women were detained on different dates.[1]

Investigating the clashes on 13 February, a field researcher with Syrians for Truth and Justice (STJ) based in Afrin interviewed several eyewitnesses and a number of the two armed groups’ fighters. The researcher also monitored the security situation in the city in the days following the clashes.

On 13 February 2021, around 01:30 P.M., an eyewitness reported that fighters driving a car-affiliated with the al-Jabha al-Shamiya/Levant Front attempted to arrest a man at a Money Exchange Office near the Army’s headquarters at the Kawa Roundabout[2] . The eyewitness’s account was later corroborated by a video published by local activists on 15 February.

The video shows the Front’s fighters being deployed across the street before said car appears. Then, the fighters encircle the Army’s headquarters and fire light weaponry.

Soon after, the situation spiraled and medium weaponry appeared, such as DShK machine guns and RPGs. The two armed groups exchanged fire till around 05:00 P.M., and stopped only when Turkish forces intervened, including army generals and members of the Ombuds Committee.

According to eyewitnesses and local sources, the man whom the Front tried to arrest was an associate of the Army, a smuggler who helps people cross Syrian borders to Turkey illegally. The man was heading to the Exchange Office, near the targeted headquarters, to receive a sum of money. When the Front’s fighters tried to arrest him, the Army’s fighters intervened, and the confrontation developed into a brutal armed clash. The smuggler managed to escape, eyewitnesses and local sources told STJ’s field researcher. 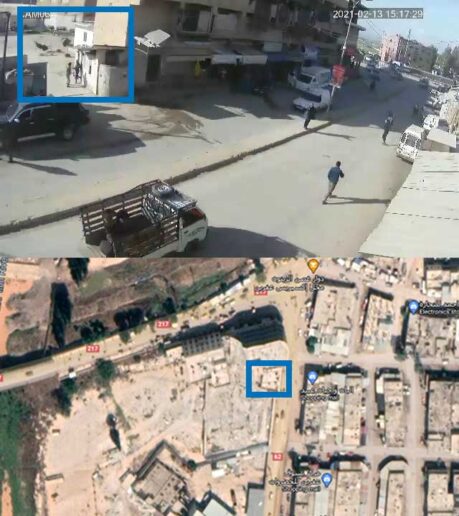 Image 1- Screenshot from the above-mentioned video, showing the black car of the al-Jabha al-Shamiya/Levant Front near the military headquarters of the Jaysh al-Islam/al-Islam Army, close to the Kawa Roundabout. The bottom section of the image, locates the headquarters at one of Afrin city’s neighborhoods.

After the clashes calmed down, a man nicknamed Abu Walid al-Dar’ouzi, a member of al-Helo family from Aleppo city, was found dead. The man owns a jewelry shop on the same street where the clashes broke out. His dead body was discovered inside his shop, which had been completely looted.

So far, there has been no evidence found proving which of the two groups is responsible for the man’s death and the robbery of his shop, nor information about whether he was killed in the clashes or after the Disengagement Forces arrived on site.

Even though the clashes were not verified as the main reason for the man’s death, the incident took place during the security chaos, when only the two armed groups and the Ombuds Committee’s Disengagement Forces could be seen in the location.

The clashes also resulted in the death of one of the Army’s fighters and a paralyzed, civilian man inside the Army’s headquarters. Additionally, three fighters of the Army and four others of the Front were injured, according to a civilian witness, who was on the street during the clashes.

Owners closed most of the shops as soon as they heard gunfire and fled. A witness added that many of the street’s shops and homes suffered material damage and were struck by bullet shrapnel.

On 14 February, a funeral ceremony was held for the Army’s fighter and the man who died inside the headquarters—the two are from Eastern Ghouta. Amidst heavy gunfire, the two were taken from the Abu Bakr al-Siddiq Mosque in Afrin city.

The clashes between the Army and the Front halted after the Turkish forces and Ombuds Committee’s Disengagement Forces intervened. An agreement was signed providing for the establishment of a “Sharia Scholars Committee” to investigate the dispute between the two armed groups. Furthermore, five of the Front’s fighters were detained, accused of inciting the fight.

STJ’s field researcher monitored the repercussions of the fight. The Army brought in military reinforcements from the city of Al-Bab, while all other armed groups in the city were on high alert.

The researcher also quoted a fighter of the Front, who said that the Front intends to expel the Army from the city of Afrin.

Control over Afrin city is shared by a number of armed groups, which constantly seek to expand their areas of influence to access further material gains. The armed group in control of one neighborhood or street, for example, maintains a monopoly over all real estate belonging to the street’s original Kurdish population, who are now displaced. The groups lease, sell, or even invest in these properties, with the profits claimed by personnel or commanders. The revenues are never used to achieve the armed group’s general good. STJ’s field researcher in Afrin mapped out the armed groups’ control over areas across the city. They are distributed as follows:

Image 2- A copy of the agreement providing for the formation of the Sharia Scholars Committee, which is to investigate into the dispute between the al-Jabha al-Shamiya/Levant Front and the Jaysh al-Islam/al-Islam Army. The committee members are Abdulmou’iz Hilal, Hussam Salameh, and Muwafaq al-Omar. 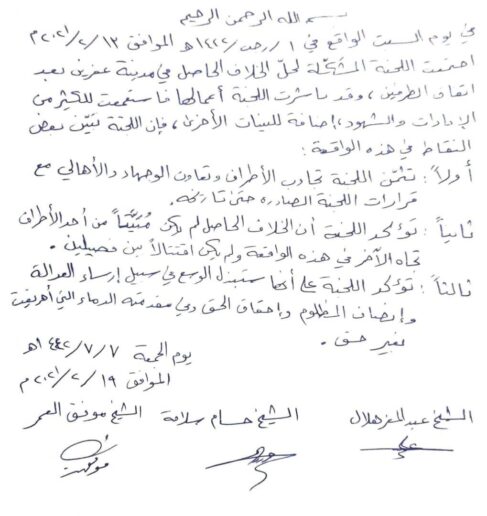 Image 3 – A copy of the agreement to form a committee looking into the dispute between the between the al-Jabha al-Shamiya/Levant Front and the Jaysh al-Islam/al-Islam Army. The committee members are Abdulmou’iz Hilal, Hussam Salameh, and Muwafaq al-Omar.

[2] The roundabout was granted this name by people during the revolution. However, it was later changed into the Olive Branch Roundabout by the Turkish Army/Syrian armed opposition groups.