Hikmat al-Da’ar died of an insulin overdose and torture by theNorthern Hawks Brigade in Ras al-Ayn/Serê Kaniyê, and Mohammad al-Jasem was tortured to death while investigating a Military Police prison in Tell Abyad 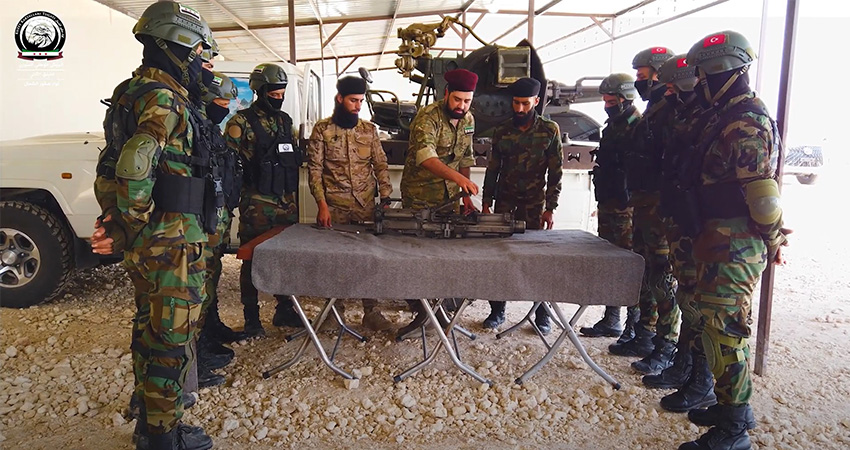 An image taken from a video clip published on the Northern Hawks Brigade YouTube channel in May 2021, showing the group's military exercises.

On 22 September 2021, activists circulated a video and photos of a young Syrian man bearing severe marks of torture. The images later discovered to be of Hikmat al-Da’ar, who was arbitrarily arrested by members of the Northern Hawks Brigade’s 2nd Corps in Ras al-Ayn/Serê Kaniyê. Al-Da’ar was reportedly arrested following testimonies from detainees linking him with the Syrian Democratic Forces (SDF); these testimonies were later withdrawn and denied.

The Northern Hawks Brigade operates under the 20th Division of the opposition Syrian National Army (SNA) and led by Abu Barazan. The Brigade is supported by Turkey and affiliated with the Syrian Interim Government and the National Coalition for Syrian Revolutionary and Opposition Forces based in Istanbul

In addition to al-Da’ar, STJ received exclusive information and images in the case of another detainee who was killed. Mohammad al-Jasem, also a young man, died of torture in Tell Abyad at the hands of Hassan Abu al-Nour, the leader of the Suqour al-Sunna group, which also operates under the 20th Division of the SNA. This incident occurred in May 2021 but has not be made public until this report.

STJ investigated the two incidents and verified that the two men were died of torture and medical negligence in SNA detention centers. STJ obtained testimonies about the two incidents from five sources, including medical workers and fighters of the two groups responsible for the death of al-Da’ar and al-Jasem.

Notably, Hikmat al-Da’ar died only a few days after another young man, Ali al-Faraj, was brutally tortured by a group affiliated with Soqour al-Sunna in Tell Abyad on 6 September 2021.

The Death of Hikmat al-Da’ar

On 14 September 2021, Hikmat al-Da’ar was arrested from his home, located in the Catholic Church Neighborhood in the city of Ras al-Ayn/Serê Kaniyê, by members of the Northern Hawks Brigade, led by Hasan Khairiya, on charges of having links with the SDF. On 20 September al-Da’ar died in the Brigade’s headquarters. News of his death became public two days later when a video showing his tortured body circulated on social media, inciting public outrage.

STJ spoke to three sources directly connected to al-Da’ar’s death.  The first source said that the victim, al-Da’ar, 37, lived in the village of Al Tayyana in rural Deir ez-Zor – controlled by the SDF – before he moved to Ras al-Ayn/Serê Kaniyê, where his brother lives. Al-Da’ar worked there as a shepherd and was continually threatened by a member of the SDF. The same source confirmed that al-Da’ar had type 1 diabetes.

Shortly after al-Da’ar moved to Ras al-Ayn/Serê Kaniyê, specifically on 14 September, he was arrested from his home by order of the leader of the Northern Hawks Brigade, Hasan Khairiya. The arrest of al-Da’ar came after three men detained by the brigade accused him of being an agent for the SDF.

A source confirmed that al-Da’ar was taken to the Brigade’s security headquarters near al-Hasakah roundabout in Ras al-Ayn/Serê Kaniyê. There, al-Da’ar was investigated by the commander Najeeb Souran and tortured by Abdul Jalil Kairiyah, a man nicknamed al-Rehawi, a man nicknamed Wissam Abu Ahmed, and Mahmoud al-Nimir, Hasan Kairiyah’s brother-in-law.

According to the same source, al-Da’ar was subjected to the “shabeh” torture technique —he was suspended by wrists, beaten with a tire, and wounded with hard objects. Importantly, al-Da’ar was also denied insulin for long periods. The Northern Hawks Brigade initially asked al-Da’ar’s family for $100,000 U.S. dollars in exchange for their son’s release. After negotiations, the amount was reduced to $40,000 However, the family still could not secure the amount and thus the Brigade did not release al-Da’ar, despite the attempts of several local community leaders.

Around 11:00 P.M. on 19 September, al-Da’ar was hospitalized in the Military Hospital; however, he’d already died of an insulin overdose in the Brigade’s headquarters.  Al-Da’ar’s body was then transferred to the National Hospital, which recorded that his death occurred on 20 September and informed the 20th Division of the incident. Al-Da’ar’s family claimed his body and buried him in Al-Tayyana, Deir ez-Zor, as he had wished.

On 21 September, the forensics in the Directorate of Health of Ras al-Ayn/Serê Kaniyê issued a “military judicial incident verification report” in which it was confirmed that al-Da’ar’s body bore severe marks of torture. The report was signed by the forensic assistant Orwa al-Qa’ed and stamped with the Directorate’s official seal.

Forensic examination revealed that al-Da’ar’s body bore severe signs of violence and torture on his back, shoulders, and wrists, as well as a swelling in his right lower limb. These symptoms are common in victims of “shabeh” torture methods.

Emergency and the intensive care department reports in Ras al-Ayn/Serê Kaniyê Hospital, led by Dr. Kana’an al-Ali, described al-Da’ar’s health as follows: “The heart stopped repeatedly during CPR for durations ranging between 25 and 30 minutes. His blood sugar is over 500. The cause of death was a diabetic shock which led to a heart attack and the time of death is estimated to be five hours before the examination.”