December 7, 2022 309 views Download as PDF This post is also available in: Arabic Font Size A A A 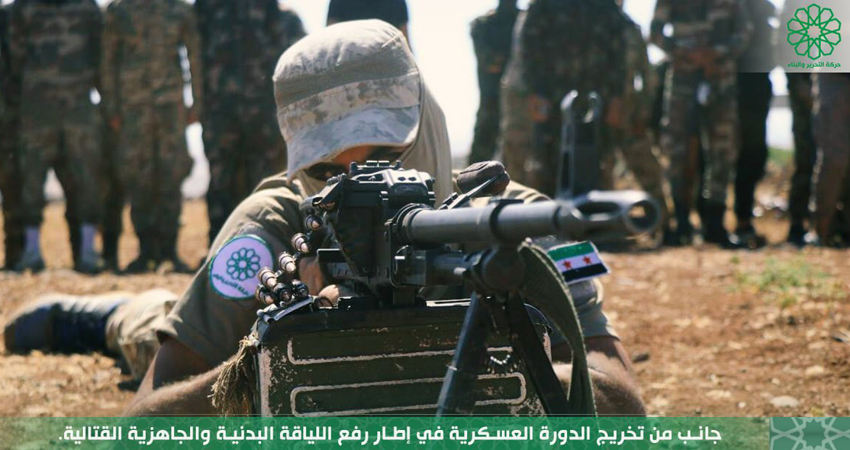 Graduation of recruits from military training with the Liberation and Construction Movement (LCM).

Since the beginning of this year, factions affiliated to the Turkish-backed Syrian National Army (SNA) have recruited at least 40 children and subjected them to military training alongside new adult recruits. Syrians for Truth and Justice (STJ) monitored and verified that those factions falsely registered the children’s ages as 18 or more in their records.

STJ obtained 17 documents containing false information about children recruited by Harakat al-Tahrir wa-l-Binaa/Liberation and Construction Movement (LCM). Not only the faction was to blame for altering the children’s information; the parents of some of the recruited children submitted fake identity documents they obtained from civil registries established by Turkey in the areas under its influence.

Issues related to the identity cards and documents issued by institutions of the Syrian Interim Government (SIG), which is directly linked to the Turkish Ministry of Interior, were highlighted in an earlier STJ report. However, recent STJ research confirms that these issues have yet to be addressed and it is still possible to obtain forged identification documents through the SIG institutions.

SNA’s recruitment of children is not a new phenomenon; however, it has surged in 2022. This violation persists despite the SIG’s Ministry of Defense’s statement, dated 19 May 2020, which prohibited forced and voluntary recruitment of children under the age of 18 in the ranks of the SNA and ordered the immediate demobilization of those already affiliated. However, according to STJ’s monitoring, this has not been implemented on the ground.

STJ also documented the recruitment of at least 29 male and female teenagers in the areas held by the Autonomous Administration in northeast Syria, over the first half of 2022. Furthermore, between 2020 and 2021, STJ reported several incidents of child soldier use in internal and external conflicts, including in Libya.

STJ obtained information and testimonies from families of enlisted children as well as private sources within the SNA. The sources confirmed the use of child soldiers in the ranks of four factions operating under the LCM: Tajammu Ahrar al-Sharqiya/Gathering of Free Men of the East, the 20th Division, the Eastern Army/Jaysh al-Sharqiya, and the Suqour al-Sham Brigades/the Sham Falcons Brigades.

STJ noted two specific methods the SNA uses to recruit children. The first: posting announcements on its social media accounts asking for new recruits. The second: choosing specific children and enticing their parents with money and the other purported benefits of conscription.[1]

A commander in the LCM explained to STJ the mechanism of recruiting children through announcements on social media saying:[2]

“The LCM makes official announcements to ask for new recruits. The announcements list the requirements for admission, which include that the applicant must be over 18. However, this is only a formality. The faction accepts applicants from the age of 13 and trains them to be snipers or personal guards of Abu Hatem, the leader. Applicants submit identification documents issued by the civil registries of the local councils. These documents show the ages of the children much higher than their real ones. In turn, the record office of the faction registers the children accepted with ages even higher than those on their submitted documents. This means that the real age of the enlisted child changes twice.”

Since early 2022, Tajammu Ahrar al-Sharqiya/Gathering of Free Men of the East, the 20th Division, and the Eastern Army/Jaysh al-Sharqiya recruited 800 new fighters, 40% of whom are children. STJ collected detailed information on 17 of these children. The same source noted that these fighters underwent military training in three camps and the LCM announced their “graduation” on its social media accounts.

The second method of recruiting children relies on individuals from the factions who select poor families to lure them into sending their children for recruitment, which can provide for them. The factions use children recruited this way on battlefields or at checkpoints in towns and villages under their influence. These child recruits receive a salary of 450 Turkish Lira (TL) every fifty days, which is a small amount compared to that given to the children used as snipers or personal guards, who receive 1500 TL per month.

A second source,[3] who is also a commander in the LCM, provided STJ with a list of data and photos of children who were recruited at the age of 13. Those children are still serving as personal guards and snipers in the ranks of the LCM’s four abovementioned factions, although they have not attained the legal minimum legal age of recruitment.[4]

The list provided by the source contained data related to 17 children, including 10 from Deir ez-Zor, four from Aleppo, and three from Raqqa. Tajammu Ahrar al-Sharqiya/Gathering of Free Men of the East trained five of those children as snipers, the Eastern Army/Jaysh al-Sharqiya trained another five as fighters, the 20th Division also trained five to be members of the Special Forces Group, and the Suqour al-Sham Brigades/the Sham Falcons Brigades trained two to be 23mm anti-aircraft gun shooters.

STJ was able to meet relatives of two underage siblings, who serve in Tajammu Ahrar al-Sharqiya/Gathering of Free Men of the East. After their recruitment, the family of the two children was given a house in Afrin’s Rajo, seized from a Kurdish family.

Relatives of the two siblings testified that the first child was enlisted as a regular fighter without receiving any military training and he serves at one of the faction’s checkpoints in Afrin for 450 TL every two months. The second child received sniper training and now is serving as a sniper for the faction in continually changing places of service for a monthly salary of 1500 TL.

Furthermore, one of the relatives stated that the two brothers’ father was a member of the faction and he died in the early battles of Operation Olive Branch. After he was killed, his family did not receive the alleged “martyr” monthly salary or any other compensation. Therefore, the family had no choice but to comply with the faction’s offer and recruit its children to secure a living. The relative went on to say:

“When the father was killed in 2018, the eldest son was 12. Between late 2019 and early 2020, a member of the faction came to our home and told us that the faction organized a military course for children and it would recruit those who successfully complete it. The children’s mother accepted the member’s offer. She was pushed by poverty since the children used to work long hours of labor for extremely low wages, which are insufficient to feed a family of a mother and five children. The eldest child then joined the faction and was trained as a sniper. Six months later, the younger child, who then turned 13, also joined the faction, which handed him a rifle and set him at one of its checkpoints in Afrin without giving him any training.”

[1] Most of the announcements were deleted a few days after they were posted.

[2] He spoke on condition of anonymity for security reasons.

[4] STJ will not publish the list for the safety of the children and their families.