Syrians for Truth and Justice (STJ) verified that factions operating under the opposition’s Syrian National Army (SNA) have been recruiting children among their ranks. Field researchers with STJ obtained information and testimonies confirming that at least 20 minors are currently commissioned within the ranks of the SNA. When our researchers interviewed faction commanders, they claimed it is difficult to control child recruitment despite difficult steps taken to end the practice.

Several of the recruited minors were deployed on the front lines during Operation Peace Spring. Others were trained in military camps across Azaz and Afrin and are still carrying out the tasks they were assigned despite the SNA’s decision to demobilize all child soldiers.

On 19 May 2020, the Ministry of Defense—General Staff of the Syrian Interim Government (SIG)— made a statement banning the recruitment or voluntary conscription of children under 18 years old within the SNA. Additionally, the statement provided for the immediate discharge of the children already enlisted. The United Nations Secretary General has taken note of the command and invited the SNA “to engage with the United Nations for the purpose of developing and implementing an action plan to halt and prevent child recruitment and use by all groups and factions under its umbrella.”

STJ has been covering child recruitment by all parties to the Syrian conflict, including by armed opposition groups. Consequently, this briefing complements two previous exhaustive reports STJ published in May 2020— on minors recruited by the SNA and sent to fight in Libya— and in March 2021— on minors stuck in Libya and denied return to Syria, many of whom are still performing military tasks.

Field researchers with STJ reached out to  command-level military sources to obtain details about the implementation of the ban on child recruitment. The two sources, from two separate SNA-affiliated factions, said that minors continue to be enlisted into the ranks of the SNA despite the direct orders to end the practice and discharge commissioned children. The sources added that several faction commanders did not adhere to orders and insisted on enlisting children, relying on means and mechanisms which allow them to circumvent the general system by which the SNA operates.

While the two sources noted that child recruitment decreased significantly after the ban and noted that several restrictions have been instituted to obstruct new recruitments since May 2020, they added it is difficult to monitor and control the actions of smaller military groups spread  throughout towns and villages.

The first source, a commander in Afrin region, commented on the number of child recruits within SNA factions and the purposes of similar recruitments. He told STJ:

“I do not deny that there are under-18 children within the formations of the factions. Yes, there are children. However, this small percentage has been enlisted by divisions and sub-groups in villages and towns seeking to increase their manpower. These young recruits are not sent to training camps, or to active fronts. They are mobilized to checkpoints within villages or commissioned as guards to military headquarters. The number of children present in camps is extremely small. When children are sent to camps it is the division’s commander that must be held accountable for trying to increase the number of his recruits.”

The second source, a commander in Turkey, addressed the tough measures the SNA put into effect to end child recruitment. He told STJ:

“The recruitment of under-18 children was completely stopped, particularly after we entered the region in 2020. Turkey has even refused to pay the salaries of any under-18 persons registered with the [army] and refused to enlist any new recruits. However, some field commanders have been enlisting children using fake identity documents (ID). For example, some commanders use the ID of a child’s older brother to add his name to the payroll. [For proof], these commanders even provide a falsified copy of the ID and complete personal data.. The SNA and the Turkish commands do not audit every recruit’s case separately.”

“These child recruitments are a random phenomenon. Such enlistments are carried out by individual field commanders because they operate across various areas and act independently when it comes to their recruits — not to mention that the divisions are fragmented. We cannot entirely control the phenomenon because there are no institutions, government, decisive regulations, or censorship.”

“I do not deny that there are child recruits and that they participated in battles. Most of these incidents happened after Operation Euphrates Shield. However, as the SNA command, we immediately address any violations we are informed of.”

Field researchers with STJ obtained detailed information on three cases of child recruitment. These children were enlisted at an early age and remain under 18 years old. Moreover, all three children continue to perform the military tasks assigned within the Sultan Murad Division and Suleiman Shah Brigade (also known as al-Amshat). The field researchers compiled the information from fighters within the two groups.

A fighter of the Sultan Murad Division confirmed that there were 21 children under the age of 18 at the Abdul Qader Saleh Military Training Camp— located in Sajo border village, near Azaz city in the northern countryside of Aleppo— in March and May 2020. After the training, these minors were deployed to various areas, including Tell Abyad and Ras al-Ayn/Serê Kaniyê. The fighter said that minor combatants are paid a salary between 400 and 500 Turkish Liras (TL) and they are not treated based on their age. Instead, they are assigned tasks and duties similar to those performed by adult combatants.

In 2018, al-Twaimee, then 14, joined the military faction Faylaq al-Sham (al-Sham Legion) and did not undergo military training. On 26 August 2019, he enlisted with the Grandsons of Ertuğrul Battalion,[1] affiliated with the Suleiman Shah Brigade. He attended a 45-day-training camp, from early September to mid-October 2019.

On 8 December 2019, al-Twaimee joined dozens of the battalion’s fighters in Tell Abyad. He participates in Ribat patrols on the fronts in Ain Issa village and west Tell Abyad.[2] 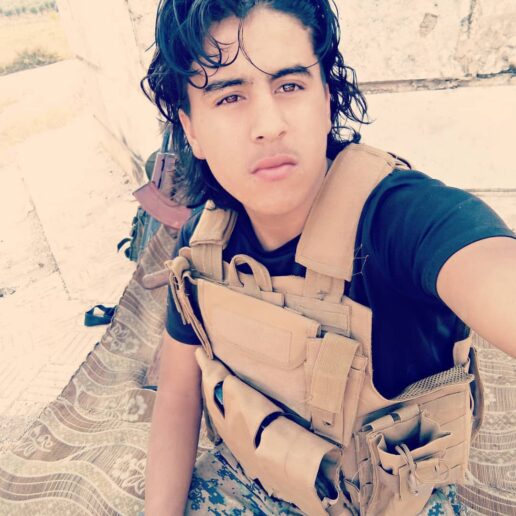 Al-Faouri joined the division on 17 February 2020, helped by commander Adnan al-Khwailed, known as Abu Walid al-Azzi. Al-Faouri joined a 2-month-training at the Abdul Qader Saleh Military Training Camp. He graduated as a DShK gunner. On 15 May 2020, he was deployed to Ras al-Ayn/Serê Kaniyê, where he remains. 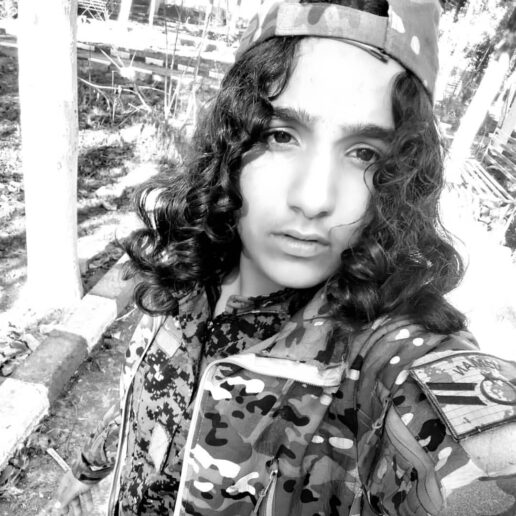 Al-Nahar, called Abu al-Wafa, joined the faction in May 2020. He was initially denied enlistment, but was then granted access through the intermediary of one of the faction’s commanders, called al-Khal. He joined a 45-day-training-camp and is currently performing guard tasks and participating in routine military patrols.

[1] The Grandsons of Ertuğrul Battalion was founded in late April 2019. Back then, the Suleiman Shah Brigade posted videos onto its Telegram channel of the battalion’s fighters’ military training.

[2] In its abstract usage ribat refers to voluntary defense of Islam.