How is “Abu Amsha” Making Millions of Dollars Every Year? 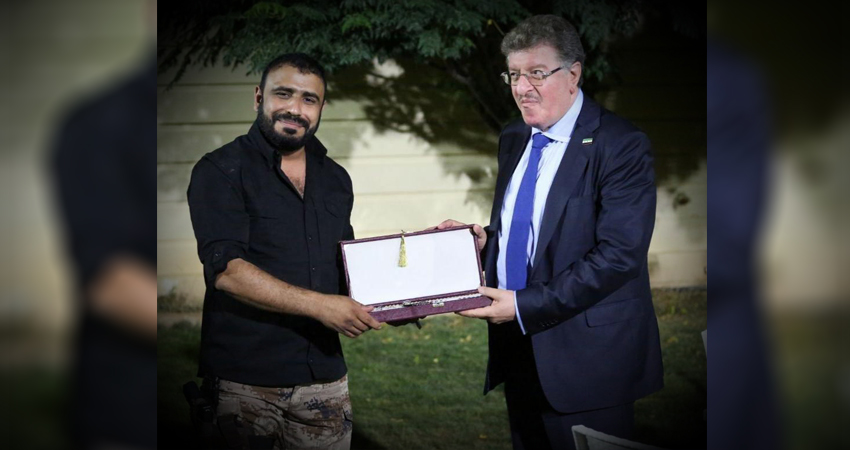 A picture of the head of the Syrian coalition, Salem Al-Meslet, honoring "Abu Amsha", the leader of the Al-Amshat faction.

This investigation sheds light on the various sources financing the Suleiman Shah Brigade (also known as al-Amshat), at a factional level, and its commander, Muhammad al-Jasim (Abu Amsha), at an individual level, which help both the armed group and its leadership maintain a tight military grip in Syria, especially in the area of Shaykh al-Hadid, in Afrin region, which is referred locally by its Kurdish residents as Şiyê.

The investigation provides corroborated information about the sources of Abu Amsha’s personal fortune and the many illegal “investments” he manages in Syria, Turkey, and Libya, depending on his five brothers and a small circle of close personalities.

The investigation reveals that Abu Amsha’s wealth, and that of his faction, comes mainly from the pockets of civilians in Shaykh al-Hadid district. Locals are subjected to a systemic pattern of extortion. They are arbitrarily arrested or abducted and then asked to pay ransoms in exchange for their release. They are also robbed of their properties, residential or commercial, which are seized under the pretext of the owners’ affiliation with the Kurdish Autonomous Administration that remained in control of the area until March 2018. Testimonies obtained by Syrians for Truth and Justice (STJ) confirm that Abu Amsha ordered many of these violations, which are supervised by his brothers and executed by his faction’s fighters.

In addition to extortion and property appropriations, Abu Amsha’s wealth for the large part rests on large-scale crop confiscations or taxes on the local population. Abu Amsha accumulated the greatest sum of his money, estimated at millions of dollars, after Afrin region was occupied in March 2018. Abu Amsha seized almost all the olive yield and other crops cultivated by Kurdish farmers in 2018, while he continued to impose taxes and royalties on farmers over the following harvest seasons, which amounted to 25% of the harvest value.

Furthermore, in the context of agricultural abuses, Abu Amsha resorted to other methods to burden the area’s original inhabitants with additional royalties. Abu Amsha’s faction established control and monopoly over the springs in Shaykh al-Hadid district and coerced Kurdish farmers to pay extra sums of money in return for irrigation water.

In addition to the sources behind Abu Amsha’s growing finances, the information STJ obtained through 26 extensive interviews reveal the extent of his annual revenues, which exceed the 30,000,000 USD mark.[1]

The interviewees, among them victims and informed military figures, also recounted that Abu Amsha has assigned high-ranking positions within the faction to several of his brothers, to whom he also delegated the management of his projects and investments in Syria, Turkey, and Libya. Moreover, the testimonies demonstrate that Abu Amsha’s brothers and his closer relations do not only “run his enterprises,” but that they are also directly associated with a wide range of the violations. Additionally, they partake in acts of embezzlement, as they continue to withhold portions of the salaries dedicated to the faction’s fighters in Syria, Libya, and Azerbaijan previously.

Additionally, Abu Amsha’s brothers and associates had found a human trafficking network, are involved in the drug trade, and are running a network for smuggling banned goods and materials through the Syria-Turkey borders.

Notably, after the U.S. Department of the Treasury designated Ahrar al-Sharqiya/ Free Men of the East on 28 July 2021, there have been rising calls for widening the scope of sanctions to include other armed groups, which continue to perpetrate large-scale violations with impunity in the region. The Syria Justice and Accountability Center (SJAC) demanded sanctioning several groups, including the Suleiman Shah Brigade (also known as al-Amshat) of the Syrian National Army (SNA). The SJAC stressed that the al-Amshat’s commander is engaged in a variety of serious crimes, including sexual violence and looting.

For the purposes of this investigation, field researchers with STJ conducted 26 interviews. The sources include civilian residents, and civilian merchants, who were personally subjected to reported abuses at the hands of al-Amshat’s fighters. Additionally, the field researchers reached out to aid workers, from humanitarian organizations operating in Shaykh al-Hadid district. They reported to STJ the mechanisms used to divert aid towards fighters and their families in the area, at the expense of those in need.

In addition to conducting interviews, STJ matched information obtained from the sources with complaints that other civilians filed to the Military Police, or the faction’s Security Office directly. Some of the complaints were referred to the Joint Restitution Commission in Afrin and its countryside. STJ opted for the comparison to identify the scale of reported violations, as well as the patterns underling them, because civilians had filed complaints, estimated with hundreds, against al-Amshat faction alone.

STJ’s team carried out a second cross-checking process to information collected from the sources. They matched the interviewees’ accounts with the information compiled first-hand by field researchers in Shaykh al-Hadid, especially data about and the locations of Abu Amsha’s local business, including a coffee shop and a mall, in addition to a few of the investments he runs in Turkey.

The team also traced links between collected information and violations already documented and aggregated into STJ’s database, particularly arbitrary arrests and abductions of original inhabitants for the sake of ransoms, and royalties imposed on olive yield and other crops.

Furthermore, STJ obtained several testimonies from first-rank military leaders in the Second Corps and from the Al-Amshat faction itself, who are inside in Syria, Libya, and Turkey. They provided the organization with verified information about the sums of money embezzled by Abu Amsha and his close circle from the support and funding provided to the faction in Libya and Azerbaijan, in addition to the ongoing embezzlement from the financial lump sums granted to the faction, delivered every 50 days on average.

The Suleiman Shah Brigade, referred to as al-Amshat in local media, currently serves under the mantle of the SNA’s 2nd Corps—an affiliate of the Syrian Interim Government (SIG), which is an offshoot of the Syrian Opposition Coalition (SOC).

Several sources say that the larger percentage of the faction’s fighters are Turkmen, who once resided in Hama province; however, STJ’s sources confirm that Turkmen fighters are only a fraction of the recruits, which makes them a minority compared to Arab fighters. STJ’s sources stressed that the Turkmen origins are projected onto the faction for promotional purposes, to claim the support of nationalist Turkish parties.

The faction was established in late 2011, several months into the Syrian uprising, under the name Liwa Khatt al-Nar (The Fireline Brigade) in Hama province. The faction partook in several battles against the Syrian government forces. When first founded, the faction consisted mainly of recruits hailing from the tribe of Muhammad al-Jasim Bani Jamil, and it served under the flag of the former Free Syrian Army (FSA).

Later, Jabhat al-Nusra (al-Nusra Front—Qaeda branch in the Levant region) persecuted Abu Amsha and his fighters, forcing them to flee to the northern countryside of Aleppo. Abu Amsha escaped in coordination with the Turkish forces, which subsequently shifted to direct engagement in the Syrian combat, abandoning Aleppo and the Syrian opposition factions operating in its eastern neighborhoods, according to former Turkish Prime Minister Ahmet Davutoğlu.

In early 2016, the faction underwent a rebranding, changing its name to Suleiman Shah Brigade after the founding grandfather of the Ottoman Empire, and as a form of rapprochement with Turkish authorities. In the same year, the faction participated, alongside Turkish forces, in Operation Euphrates Shield, which led to Turkey’s occupation of the areas of Azaz, al-Bab, and Jarabulus, among others.

In 2018 and 2019, the faction participated in the Turkey-led Operation Olive Branch, which led to Turkey’s occupation of the Kurdish-majority region of Afrin, and Operation Peace Spring, which led to the occupation of Tal Abyad and Ras al-Ayn/Serê Kaniyê. In late 2019, the faction, at the request of the Turkish government, began deploying its fighters to Libya and Azerbaijan to fight with the pro-Turkish parties, as mercenaries.