Aleppo: Remains of Three found in a Mass Grave Left by the Syrian Regime

Three men who had been disappeared coinciding with the pro-government forces’ raids and arrests in Khan al-Asal city[1], Aleppo western countryside in late 2012, were found as remains in a mass grave in 2018.

STJs’ field researcher reported that late in 2012, the regular forces and rebels vied for the control of Khan al-Asal. The former managed to come into the city in Oct. 2012, but the rebels expelled them later in April 2013.

During their control, Regime forces conducted raids, arbitrary arrests and summary executions against civilians opposing them in the al-Andoumi farms, administratively follow Khan al-Asal. The Free Police of the Syrian Interim Government followed-up and investigated the aftermaths of these actions.

The rectangle in yellow shows the location of the house where the executions believed to be conducted, while the one in blue indicates the burial site with changes in soil over the years: 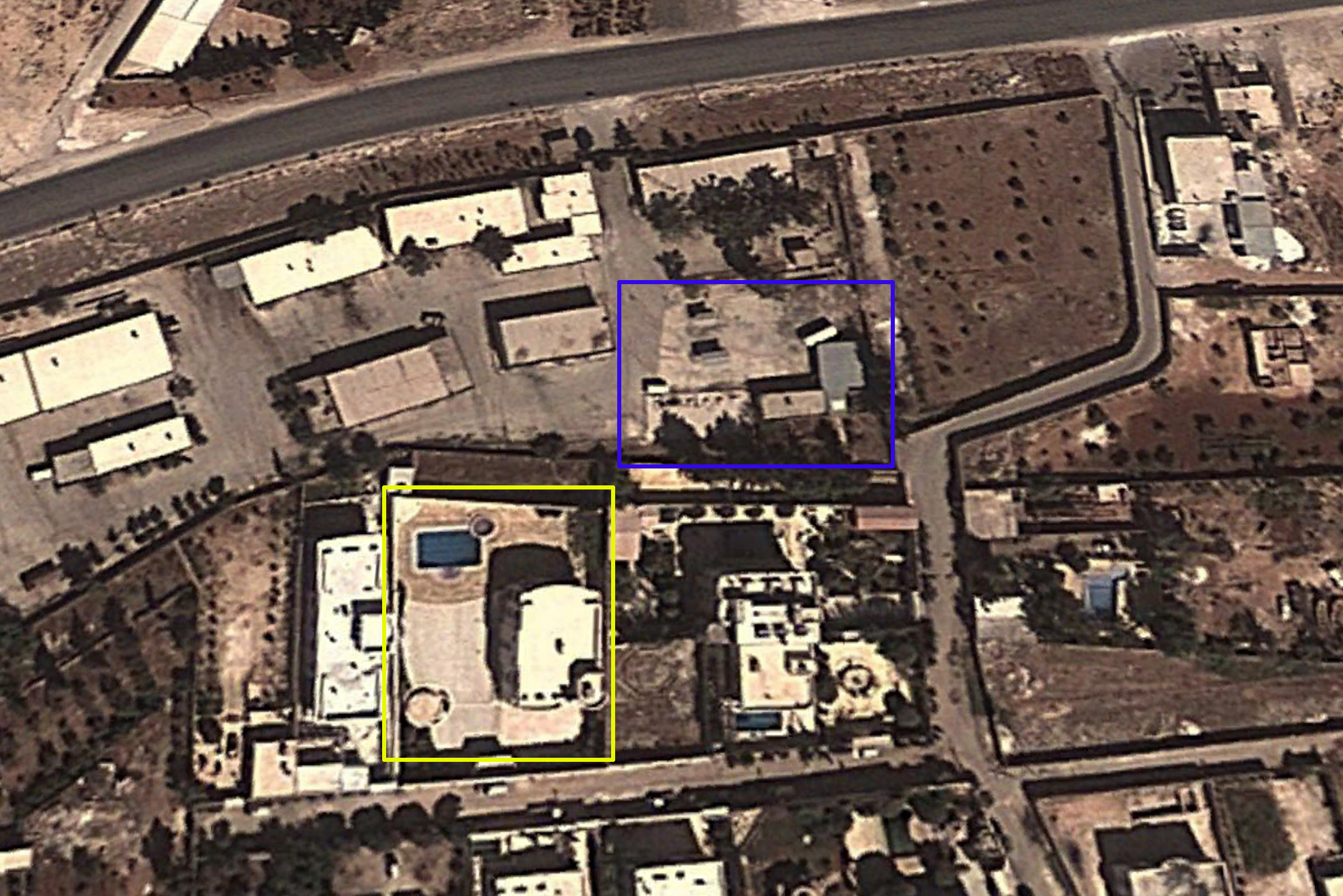 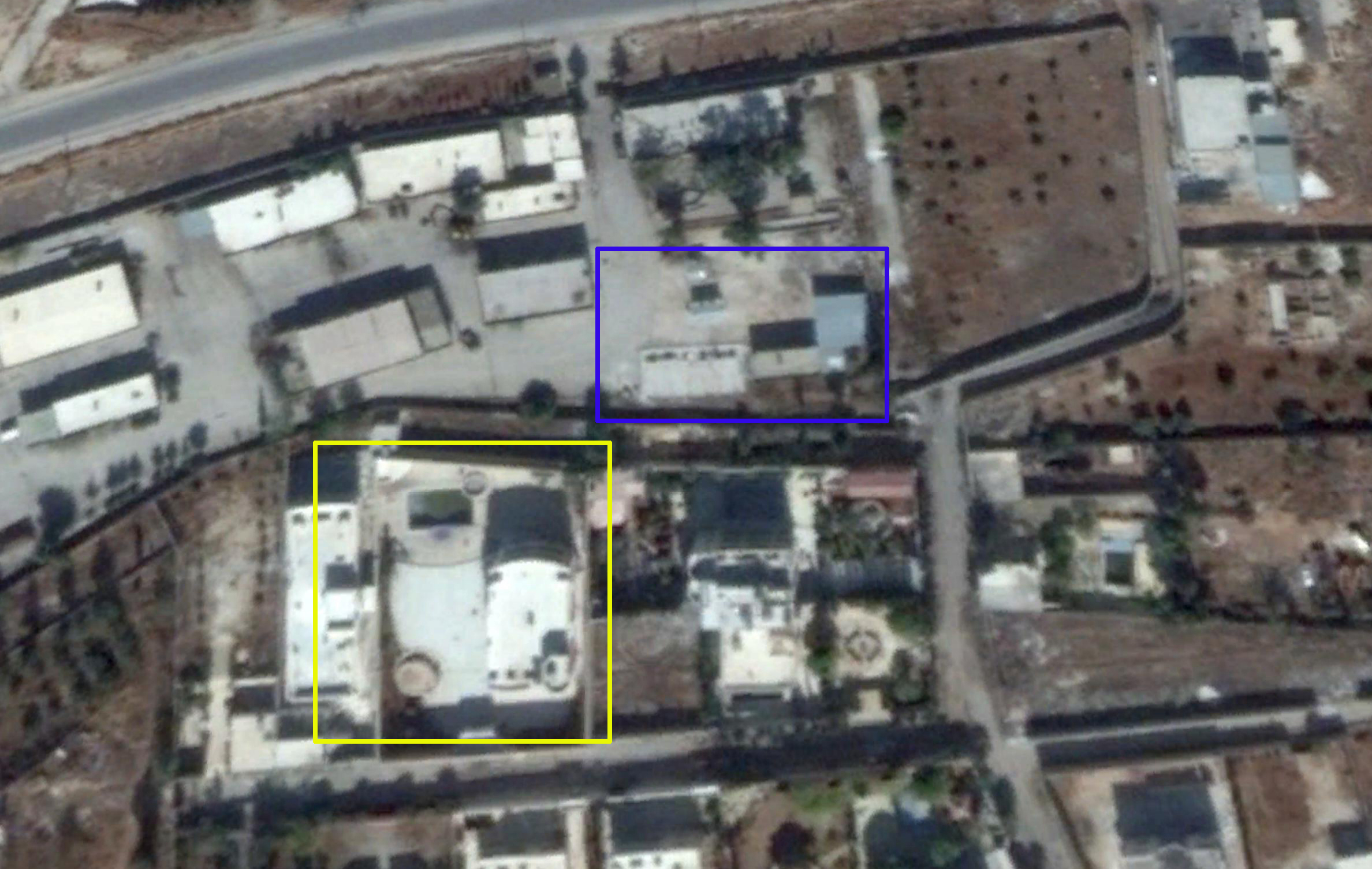 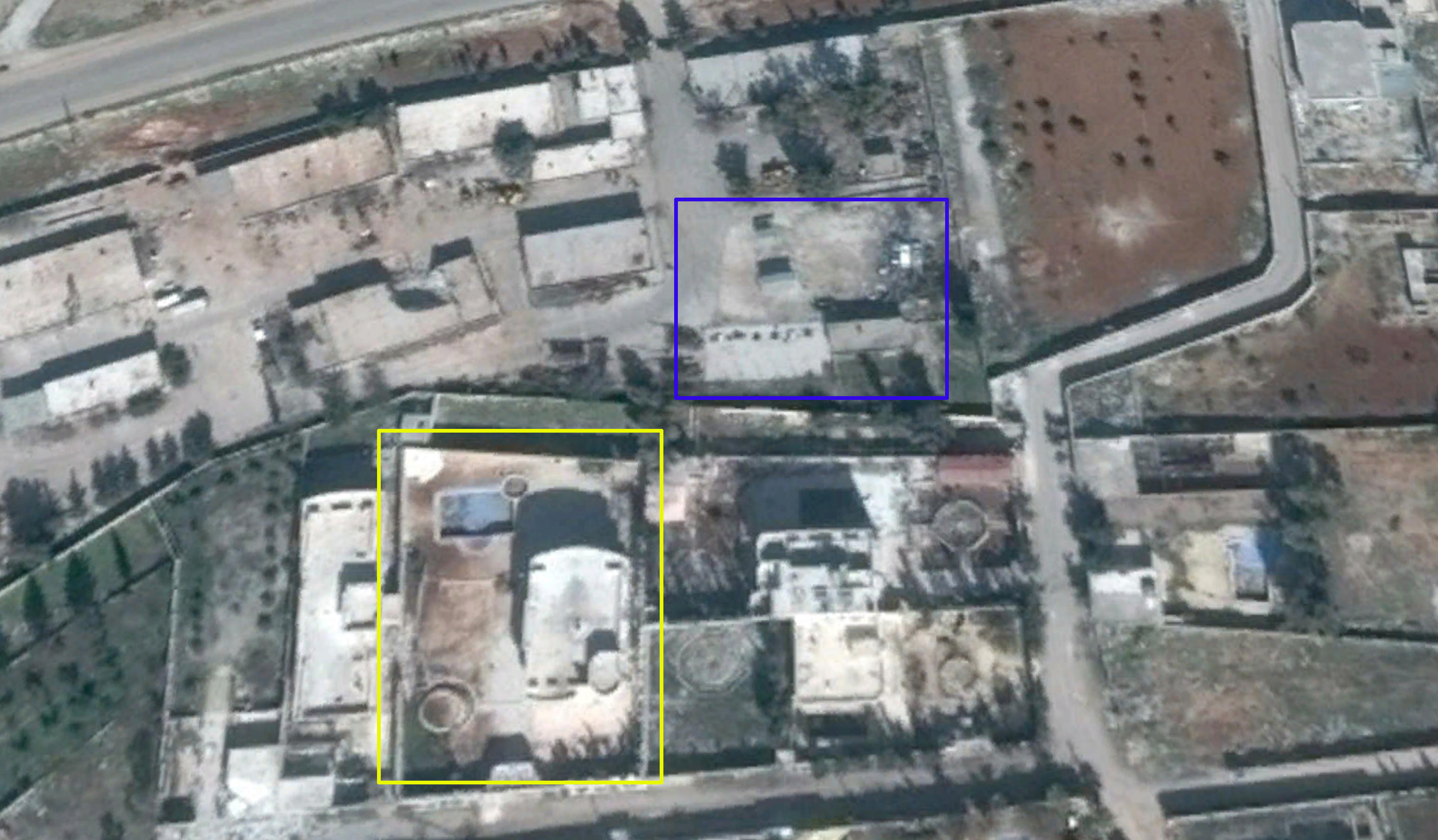 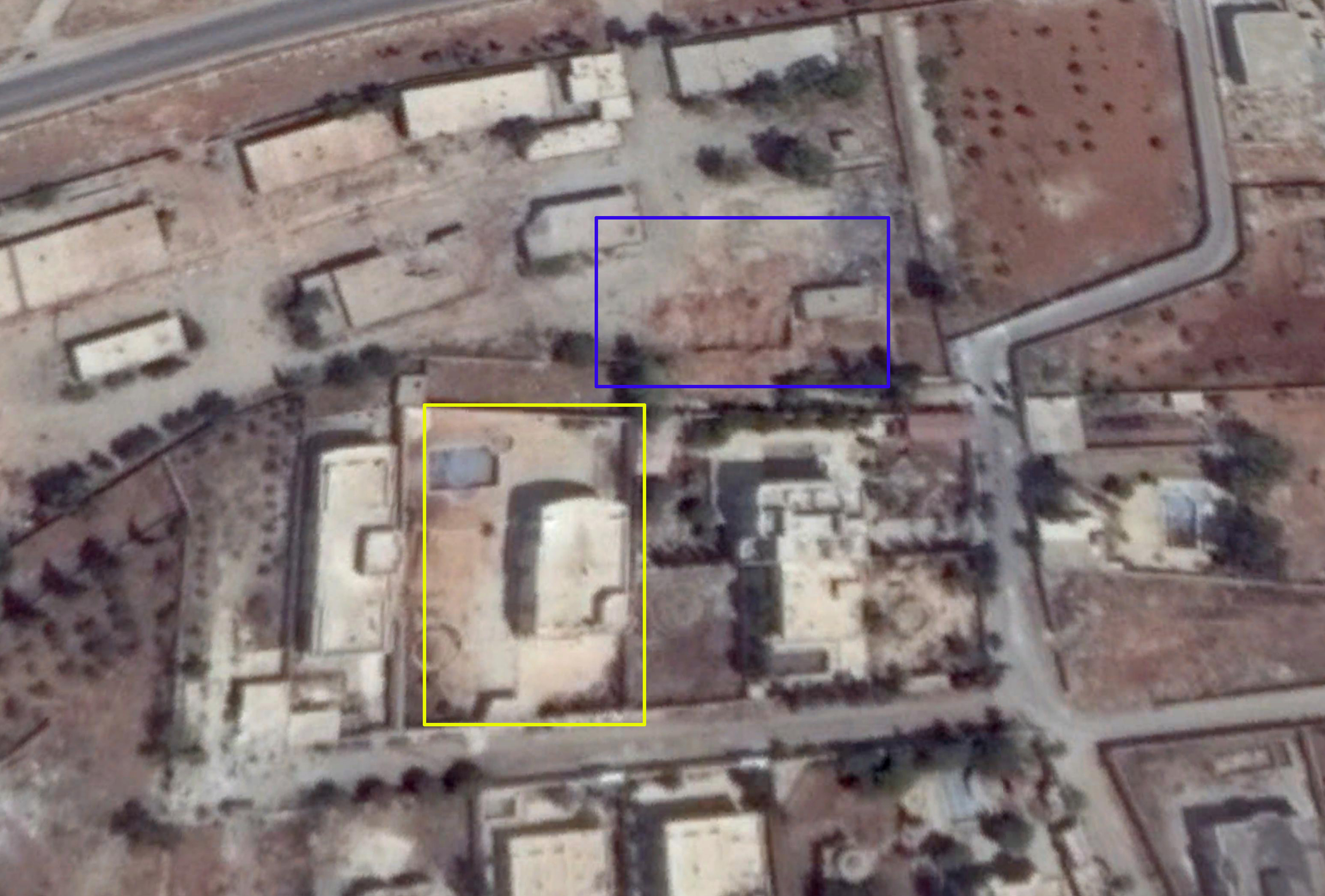 On August 29, 2018, at 12:00pm, a local resident accidently came to human remains while walking in al-Andoumi area. After the specialists’ examination of the site it revealed that it is a mass grave of three men whose identities were later known to be belong to Ahmad Abdul Razaq Aqeel,1987, Mohammed Abdul Aziz Aqeel,1984, and Ahmad Ghali Awal,1996, who are all from Salah al-Din district in Aleppo province and came to Khan al-Asal seeking work, as they were blacksmiths. News of their death was brought to their families on Oct. 27, 2012, by a woman who witnessed the incident:

“The three men were doing some repairs in a house in al-Andoumi farms when the pro-regime forces stormed the place and asked for their IDs. As soon as they read that they are from Aqeel family, who are well known of being opponents to the regime, they instantly killed them and pulled their bodies out to unknown location.On August 29, 2018, their remains were found with their IDs in a mass grave. Forensic experts of the Health Directorate confirmed after examining the samples that one of them was shot in the head and they all had been burnt after death.  We returned the remains to the grave as we couldn’t identify those of each." Ahmad Abu Aqeel, a relative of the both victims, Ahmad and Mohammed Aqeel, narrated. 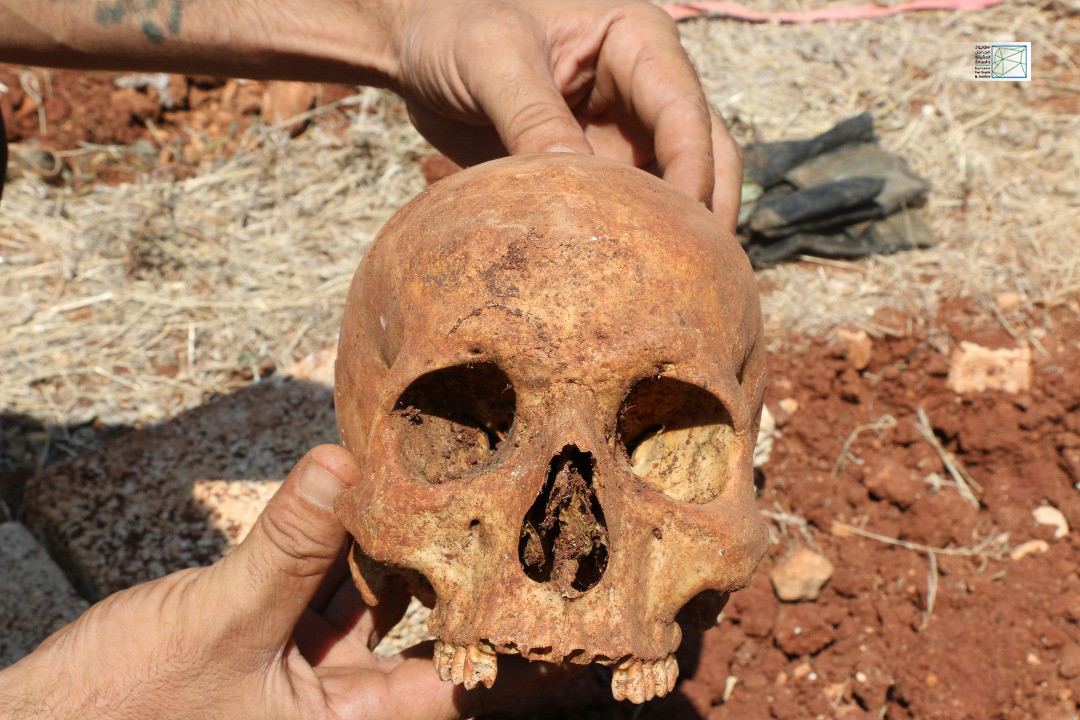 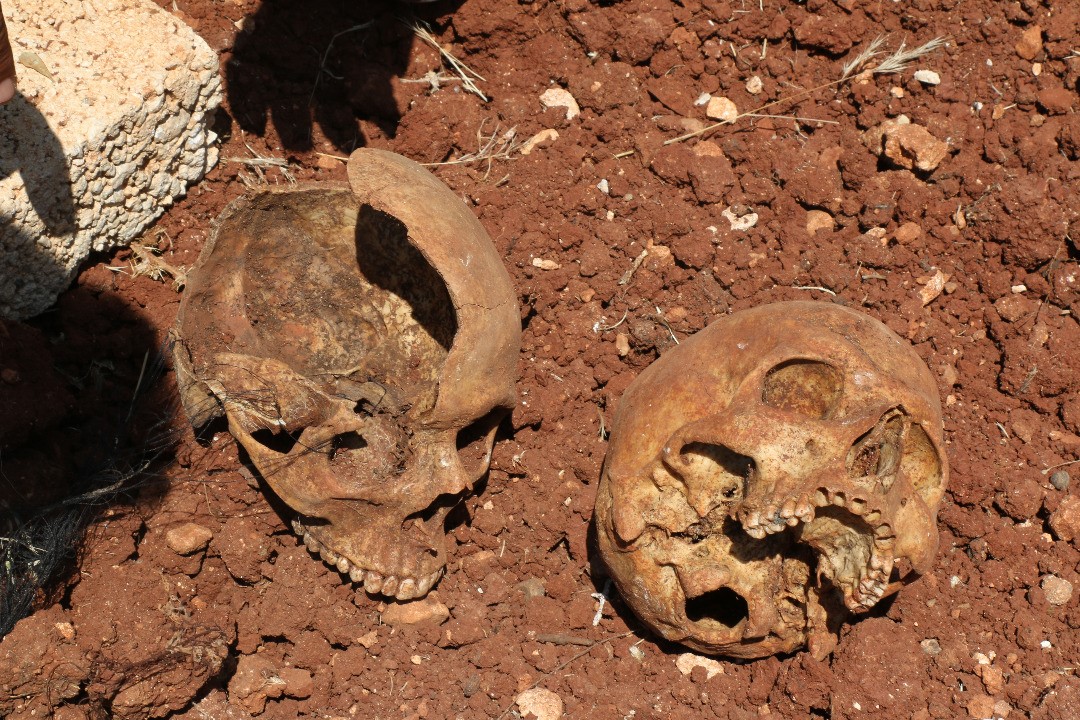 Skulls from the remains found, the one on the left smashed because of a shot.
Photo credit: local activists

A relative of the victim Ahmad Awal, said that the Free Police called him on August 29, 2018, to tell him about finding the remains of Ahmad:

"In late 2012, a woman informed us that bodies of the three men were hid after they had been executed by the regime forces. At the time it was impossible for us to search for them with the presence of the regime forces in the area, since the city was under their control, however, when the armed opposition groups took over it, in April 2013, we tried to find them but to no avail."

On August 29, 2018, a resident reported to Criminal Security agents that he came across remains of humans, so they headed with, Hasan Obeid, a forensic expert from the Health Directorate [2], and the Attorney-General of the al-Qasemiyyah Court[3] to investigate the scene.

"Investigations assured that the found remains belong to two adult males and a younger one, their identities known from the IDs buried with them besides a driving license and keys. Forensic analysis said that they had been dead for more than five years after being shot dead, which was clear from the holes in the bones and the smash in one of the skulls, the execution was likely be conducted in a house close to the found grave, as there are bullet holes similar to those found in the remains, and then they pulled out and dumped here after they were burnt." The forensic expert testified to STJ. 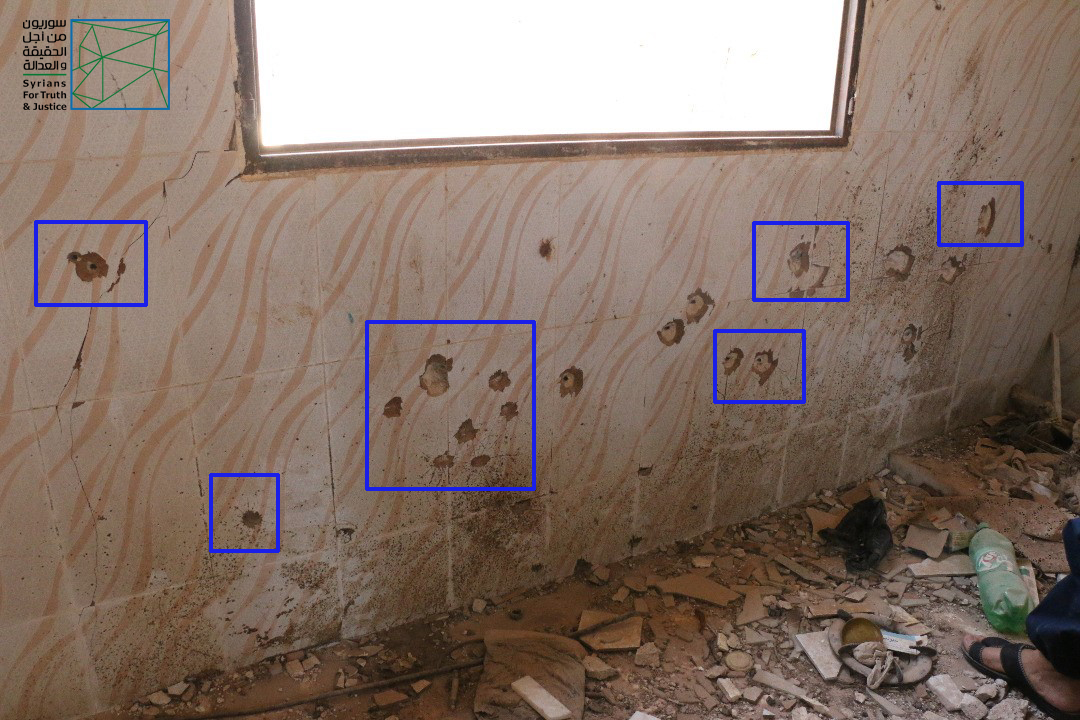 A side of the house where the three men were shot in kneeling position, according to the forensic expert Hasan Obeid, as the marks of the bullets were down at the end of the wall.

An activist from Khan al-Asal confirmed that regime forces backed by the Air Force Intelligence stormed Khan al-Asal and executed some civilians there in late 2012.

"In retrospect, it has turned out that the remains belong to those executed in al-Andoumi area. Investigations findings confirmed that they are three civilian men from Salah al-Din district in Aleppo, two of them are from Aqeel family and the third from Awal. All of them had no military affiliations, they came to al-Andoumi area seeking work and disappeared there since 2012. Competent authorities in cooperation with the Health Directorate started searching the area for more expected graves." The activist reported.

Abdullah Qojo, another witness from Khan al-Asal, testified to STJ,

"Once this grave was found, families of other disappeared feared that their sons had died the same way" 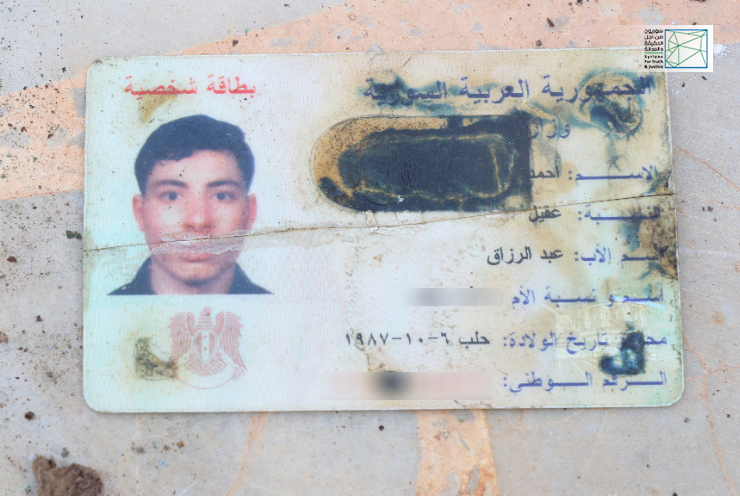 [3]A civil court established in Aleppo countryside in 2013.