A Violent Military Escalation on Daraa, and Waves of IDPs as a Result

Preface: With blatant disregard of all the warnings of the international community and UN, pro-government forces launched a major military escalation against Daraa Governorate, as from 15 to 20 June 2018. According to STJ researchers, many eyewitnesses and activists from Daraa, Syrian forces began to mount a major offensive against the armed opposition factions held areas by bringing reinforcements from various regions of the country a short time ago. The scale of these reinforcements became wider since June 18, 2018, as the Syrian regime started to send massive military convoys and reinforcements towards Daraa

Al-Harra and Agrabaa towns, as well as Kafr Shams city located in the western countryside of Daraa[1], have been subjected to artillery and rocket shelling which resulted in a number of civilian causalities dead or wounded. Daraa’s eastern countryside[2] was also shelled, as The Lajat Nahitah and Buser al Harir towns witnessed an aerial bombardment by military aircraft of the Syrian regular forces on June 19, 2018, causing a number of civilian casualties.

According to STJ field researcher, shelling Daraa countryside led to the displacement of many civilians, and that was coincided with the closure of the crossings by the Syrian regular forces to prevent civilians from leaving the areas controlled by the Syrian armed opposition, ignoring that southwest Syria is included in the agreed-upon de-escalation zones according to an agreement signed on July 9, 2017

STJ field researcher described the overall situation in Daraa Governorate as moving towards a major escalation in military confrontations between the Syrian armed opposition forces on the one hand and the Syrian regular forces and their allies, the Iranian and Lebanese forces, on the other.

The pro-government forces positioned their massive reinforcements near the opposition held areas throughout southern Syrian, which portends a major humanitarian disaster, as the civilian houses are violently bombed, in order to pressure the opposing factions to accept certain military and political solutions

On June 20, 2018, the United Nations expressed its concern over the fate of some 750, 000 people in southwest Syria, saying that a military attack caused the exodus of people from Daraa towards the Jordanian border, and indicated that bombardments and battles in several areas of Daraa resulted in the kill of 20 people, 11 of whom from Daraa, besides the injury of many others, as reported

Areas in Daraa were bombed earlier in February 2018 by Syrian regular forces and their allies, causing civilian casualties. STJ has prepared a report in this regard entitled "Threats to Reiterate Eastern Ghouta Scenario in Southern Syria-Daraa, Attacks Accompanied the Threats Led to Mass Exoduses towards Jordanian Border". STJ has also prepared a further report entitled "Civilian Casualties Still Falling Despite the Establishing of a" De-escalation Zone in the South" and Diminishing the Intensity of Military Operations A Report Summarizing Commitment of Parties to the Conflict to "De-escalation Zone” Agreement in Southern Syria.” 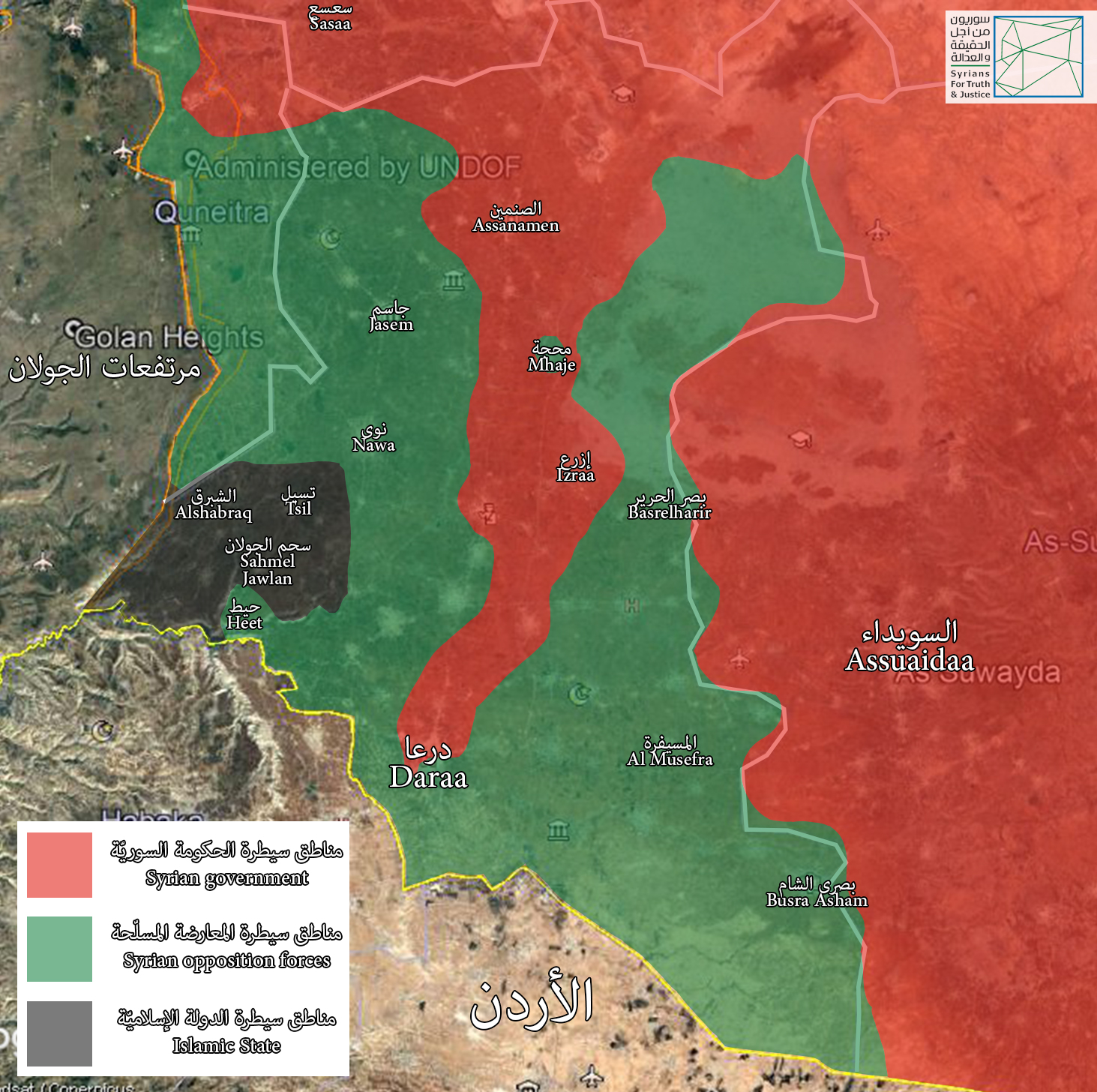 A satellite image illustrates the distribution of Daraa areas among the conflicted parties as at June 20, 2018.

Massive troops were sent to Daraa by the Regime, on June 18, 2018, which included large military vehicles, a artillery guns in addition to tanks, armored vehicles and hundreds of the Syrian regular forces fighters, as confirmed by “Ahmed Yaman”, a media activist from Mhajjah town, adjacent to the Damascus-Daraa highway, who said to STJ that he had seen those military convoys with his own eyes. Other activists also said that other reinforcements were sent from Damascus to As Suwayda city and were stationed in its western countryside. A Russian channel aired a footage, which showed the military column heading towards As Suwayda,in which the National Defense militiamen were replaced with members of the pro-government’s 4th Armoured Division as well as Iranian and Lebanese aligned forces fighters.

Second: Rocket fire on Daraa western countryside and hundreds of IDPs as a result:

On  June 15, 2018, in particular, on the first day of Eid al-Fitr, Al-Harra, Kafr Shams and Agrabaa in the western countryside of Daraa were subjected to heavy bombardment with rocket launchers and heavy artillery shells loaded with incendiary substances, which resulted in the kill of a number of civilians and the injury of others, according to “Muhammad Qunbus”, a media man at the local council of Al-Harra town, where he spoke to STJ in this regard, saying:

“The western countryside of Daraa was bombed in the early morning of the first day of Eid al-Fitr, specifically following Eid prayers, as a total of 50 rockets were fired, resulting in the burning of several houses and the killing of four civilians in al-Harra including residents and IDPs, they are; (the three children Muhammad Azzam al-Qawareet, Alaa Qasem al Saadi and Ali Muhammad al-Jarad and the young man Muhammad Adnan al-Jarad), where fifteen others were wounded.The shelling originated from (Sebsiba military company, Jubailia, al-Habaria, Tuloul Fatima, Tell el Kroum and Tall ash Sha“ar) in the western countryside of Daraa, where the Syrian regime forces and supporting Iranian forces stationed. The Syrian regime forces intended to shell al-Harra town once again on June 18, 2018, resulting in the death of the young man (Ali Mahmoud Zeidan Qunbus) and the wounding of five others. The violent military operations led to the displacement of more than 300 families from the town, some of whom headed towards rebel held areas in Quneitra Governorate, and others, in particular those not wanted by the Syrian security branches, went to the Syrian regime held areas, such as Kanaker village and Damascus.” 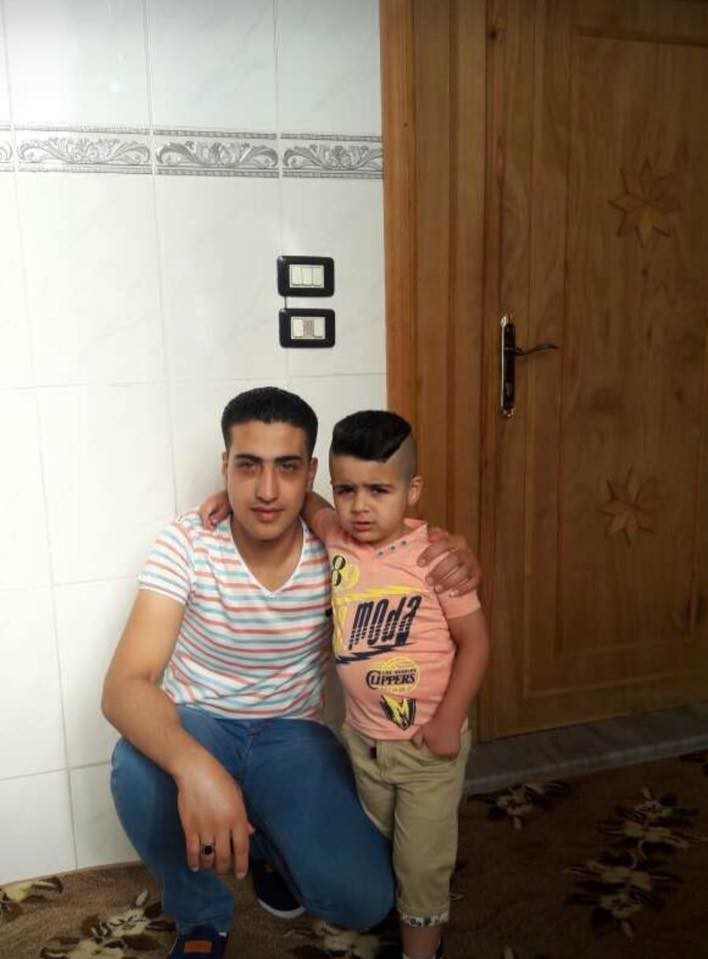 Image shows the two victims (Muhammad Adnan Awad al-Jarad and his nephew, the child Ali Muhammad Adeeb al-Jarad), who were killed as a result of the Syrian regular forces’ bombardment on Al-Harra town, on June 15, 2018. Photo credit: Al-Harra Coordination. 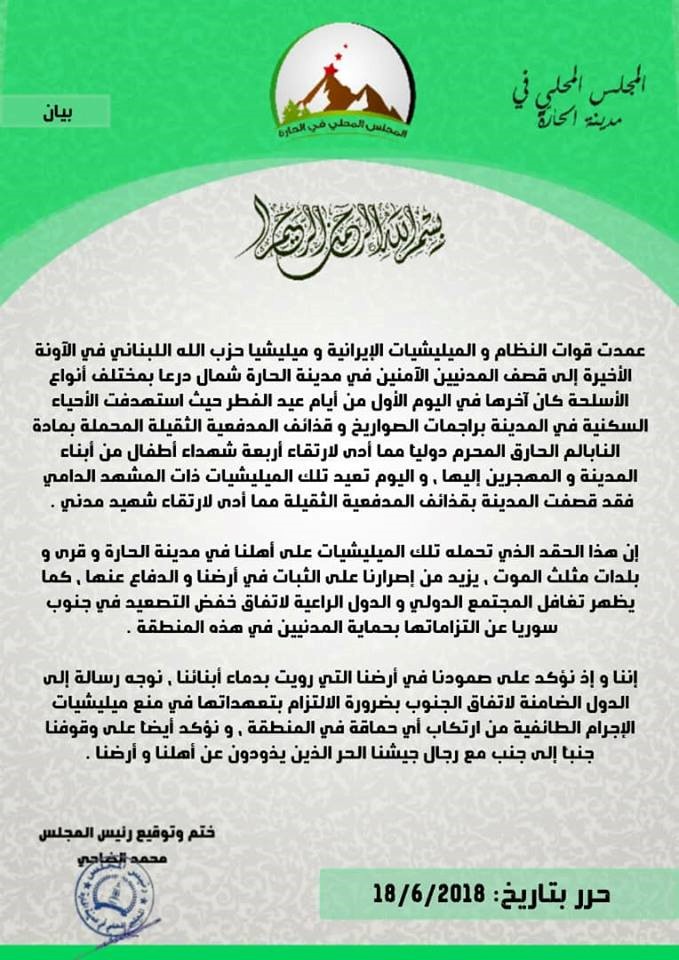 Bombing Al-Harra coincided with a fierce shelling on Kafr Shams city, killing one civilian and injuring others. Muhammad Atrat, an activist from Kafr Shams confirmed that to STJ by saying:
On June 15, 2018, the regime forces concentrated their bombardment on civilian houses in Kafr Shams city, in addition to targeting mosques, the town cemetery and the field hospital with more than fifteen rocket-propelled grenades, sourced from Syrian regime forces and Iranian forces stationed in Dayr al 'Adas village-Daraa western countryside. The shelling began in the early morning of the first day of Eid al-Fitr specifically following Eid prayers and while worshippers were leaving the mosque, which resulted in the kill of (Ahmed Abdel Rahman Abu Shaheen), and the injury of seven others. Fear spread among residents, which led to the fled of more than one hundred families towards the western countryside of Daraa and Quneitra Governorate. Regime forces shelled the town of Kafr Shams again on the morning of Wednesday, June 20, 2018, killing (Hamdo Saad al-Zarqan) and injuring scores. I think the Regime started using military force to pressure civilians and force them into a settlement/reconciliation process with it.  "

Atrat noted that Agrabaa village, adjacent to Kafr Shams, had also been subjected to heavy artillery shelling on June 15, 2018, which resulted in the displacement of approximately half of its 9,000 people, the majority of whom headed towards Quneitra Governorate. 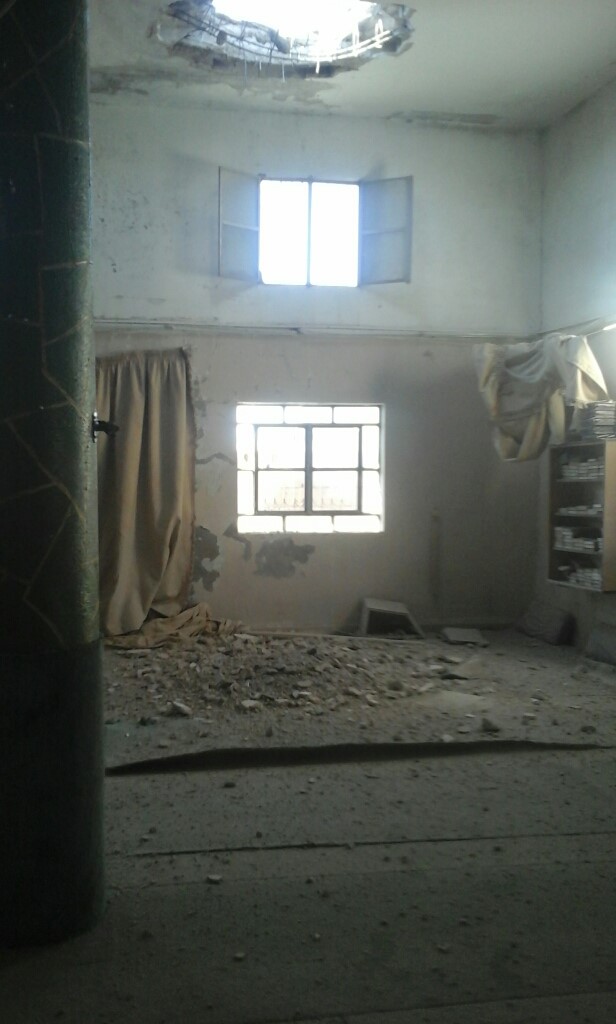 Image shows a side of the destruction caused to Usama bin Zayd mosque in Kafr Shams, following the bombardment of June 15, 2018 by the Syrian regular forces. Photo credit: activists from Kafr Shams.

Third: Airstrikes drive displacements in the eastern countryside of Daraa:

Pro-government warplanes carried out three raids with cluster munitions on al-Maseeka village located in Lajat area-Daraa eastern countryside, on June 19, 2018. These raids accompanied by an indiscriminate shelling of civilian houses by dozens of rocket-propelled grenades fired from al-Thaala Airbase in As Suwayda western countryside and other adjacent military positions, where the Syrian regular forces and the allied Iranian stationed, towards Daraa’s eastern countryside cities and towns such as Nahitah, Al Hrak, Buser al Harir, Asim, Sour and jaddil, resulting in 2 civilian deaths, dozens injuries and hundreds of IDPs from those areas. Muhammad al-Aayed, an activist from Daraa eastern countryside said in this connection:

“For the first time in about three months, Syrian warplanes launched raids using cluster bombs on al-Maseeka village and its surroundings in Lajat-north-eastern Daraa. Reconnaissance aircraft didn’t leave the sky of the area that day, while the civilian houses in Nahitah and Buser al Harir towns were shelled by rocket launchers indiscriminately, with more than 100 rockets, resulting in the kill of two people from Nahitah town who are (Saif Sami al-Qadiri), a civil defense paramedic, and the young man, (Bashar Muhammad al-Maneizel, besides dozens of injuries.” 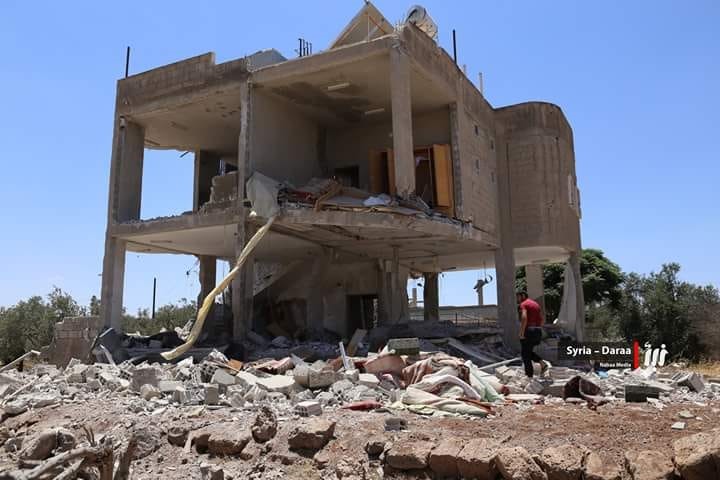 Al-Aayed said that the unprecedented bombardment on the eastern countryside of Daraa had led to the displacement of most of the population from the al-Maseeka in Lajat area, who numbered about 450 families. In addition to the exodus of the population of Buser al Harir town numbering more than 1000 families, while dozens of families displaced from Nahitah and Melihit Al Atash on 19 and 20 June 2018, and more than 500 families were displaced from several villages in the Lajat area as a result of the violent bombardment, according to local sources.

Al-Aayed also pointed out that most of the civilians living in the eastern countryside of Daraa had either been displaced to the villages bordering Jordan, such as Elemtaih, and Maaraba, while others headed to El Karak, Al-Musayfirah, Umm Walad, Saida, and Al-Ghariyah and other Daraa eastern countryside villages. Pointing out that Syrian regular forces did not allow many families out through Khirbet Ghazaleh crossing, which is one of the crossings linking the Syrian regular forces control areas with the Syrian opposition’s in Daraa. They only allowed personnel and students out of the armed opposition held areas, which are undergoing military escalation. Families displaced from Inkhil town in Daraa western countryside were also not allowed out except students and government employees.

In turn, the STJ field researcher monitored the movement of civilians to the Qunaitra and Western Daraa camps as from 15 to 20 June 2018: