Images show an IED after it was dismantled in eastern countryside of Daraa Photo credit: Activists from Daraa

Preface: The blast of IEDs, often planted on major roadsides, posed a major threat to the lives of the inhabitants of cities and towns under the Syrian opposition’s control in Daraa province. These incidents have increased since the beginning of 2017, especially after South Syria entered de-escalation zones[1] agreement on 4 May 2017. It is evident that the IED bombers are trying to target as many civilian and military Syrian opposition leaders as possible, where the series of operations by IED killed dozens of civilians, military personnel and some media men on their way to work passing through those roads.  In contrast, dozens of other IEDs were dismantled by Syrian opposition agents in addition to the arrest of cells responsible for planting these devices, who are linked to the Syrian government, "as they confessed," according to the Syrian opposition statements.

In the context of searches for manufacturing methods of IED, carrying out bombings and the bodies behind them, Mr. Hamed Abu Abdo, a specialist in dismantling IEDs in "Aamod Horan Brigade[2]" explained to Syrians for Truth and justice (STJ) in precise details materials used in manufacturing IED and the evolution of detonation methods, He said:

"IED consists of a metal body, containing explosives, which are mostly TNT, C4 or fertilizer, and sometimes contains a small amount of "activator" which increases the power of the blast, and is connected to an initiator (fuse) that spark to generate the explosion. The manufacture methods of IED vary according to the desired objective of use, if the maker wants to target individuals; he puts 1 to 2 kilograms of explosive substances or fertilizer, and it is a small-sized IED. The quantity of explosive materials increases when the groups or vehicles are targeted, and the weight of the packaging can be up to 15 kilograms, causing a massive explosion.

There are three detonation methods adopted by bombers: the first is the traditional method where a copper wire (lead), between 200-300 meters is extended from IED to the place of the monitor; these components are primitive and this kind of IED classified as simple because it is inaccurate and used principally to create chaos. The second and most frequently used method is the remotely controlled at a distance of no more than 3 km through a digital transceiver also connected to an electronic circuit, or via a mobile phone connected to an electronic circuit located near the IED with a tape attached to the initiator. When the target passes, the monitor presses the detonation button, or through two radios, the first one put beside the IED and the other hold by the monitor. Syrian government and Islamic State (ISIS) used this type for the large availability of such materials in the southern region.

The third type is the latest and the most advanced. It appeared from the recently dismantle IEDs and explosive mines, that they have been developed electronically with complex geometric method. So that the distance between the monitor and the detonators is much longer than the distances in the two previous types, as it is composed of military devices as well as some mines special for detonating tanks and are linked to a long-range radio device that remain in possession of the monitor, after which it is wrapped with "Foam[3]", for camouflage. Then it is painted with the desired color, mostly the rocks color, and then connected with a capacitor, a set of batteries, a mobile lens and a fuse. When the target passes, the monitor activate the mobile lens, which release infrared radiation. As the target passes, the fuse gives electric charge and the blast happens. Syrian government forces use this technique in particular; the error rate of this IED type is 0%."

Image shows the advanced type of IEDs where two holes appear at the bottom of the IED so that one of them releases infrared radiation as the target passes.
Photo credit: Activists from Daraa

Hamid stressed that the Syrian government forces were behind those explosions, being they often take place close to their controlled areas, by using some of the hired agents or their agents’ infiltrating to those points. Their war media documented the moment of explosion and published the videos officially. Hamid also said that cells affiliated to the Khalid ibn al-Walid Army which pledged allegiance to (ISIS) are behind explosions that take place near military headquarters or near the cars or homes of revolutionary leaders, according to the confessions of some of those involved after being arrested by Courthouse or by Syrian opposition armed factions.

The parties behind IED bombings have intended to target civilian, military and media leaders operating in Syrian opposition, in addition to targeting military vehicles transporting combatants to battlefronts, where those incidents have repeated dozens of times, perhaps the most notably: 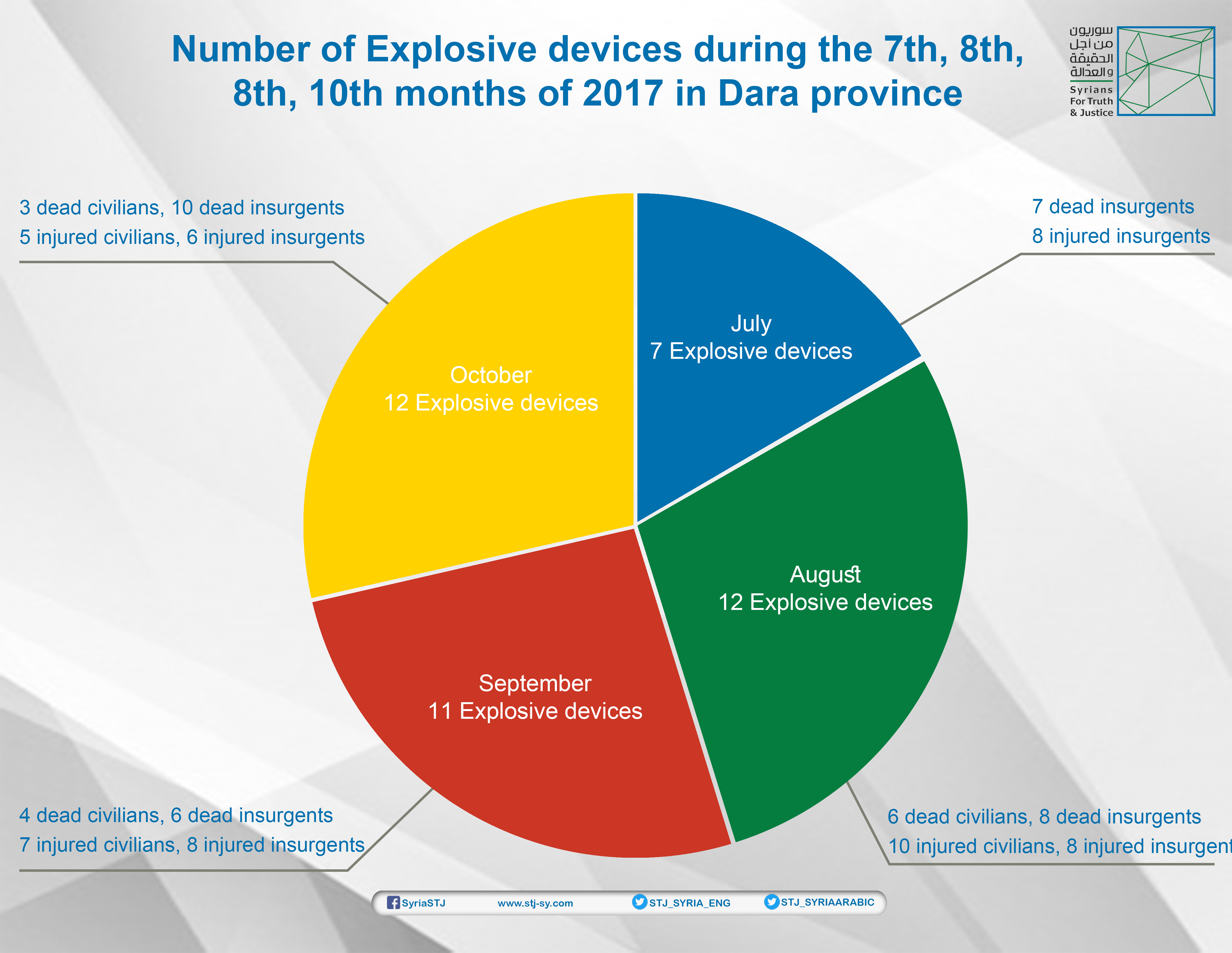 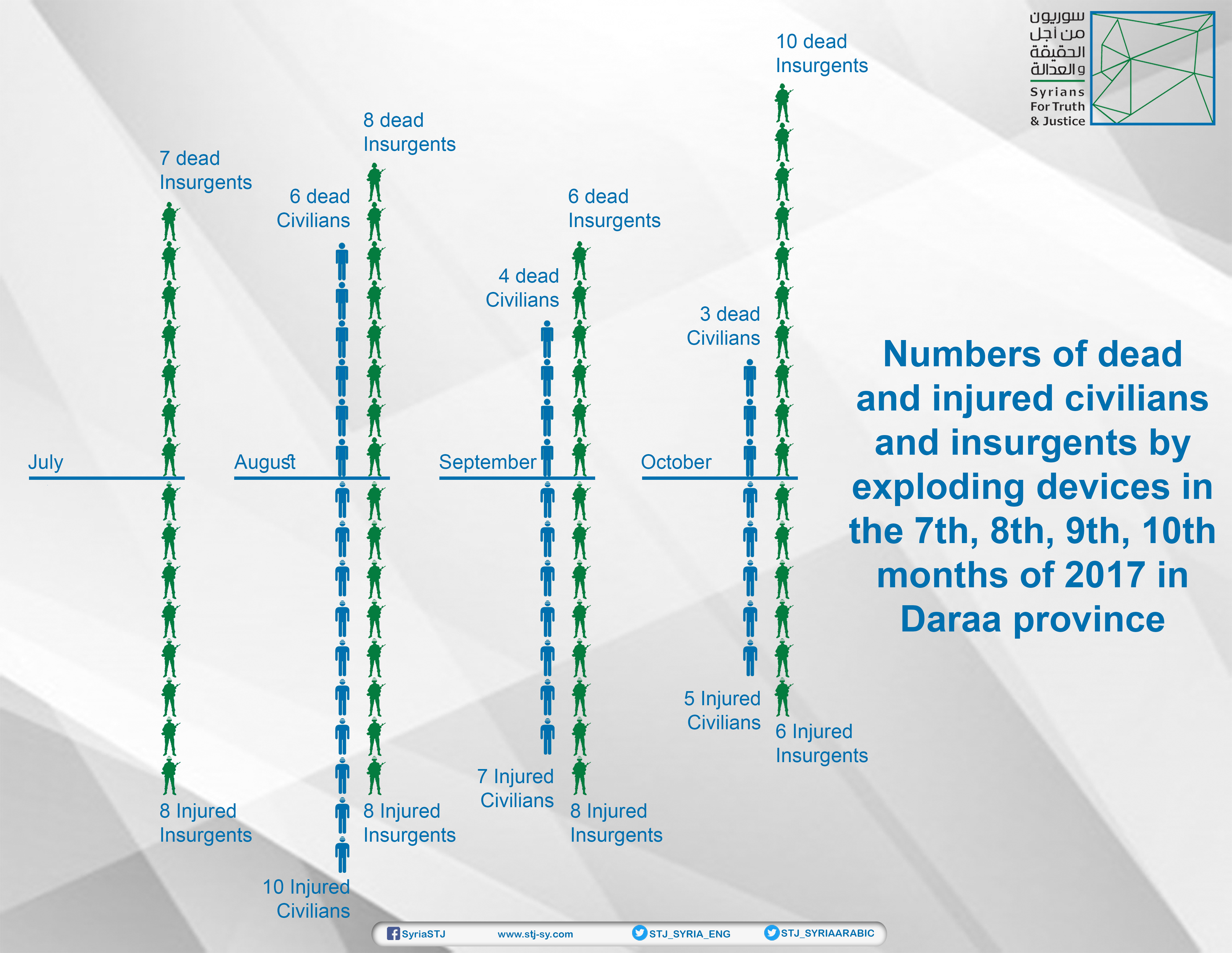 Infographic shows numbers of dead and wounded civilians and military personnel being targeted by IED, during the months (7-8-9-10) of 2017 in Daraa province.

Cells Linked to the Syrian Government Behind IEDs Detonation:

The armed opposition factions dismantled and detonated dozens of IED planted on the roads, most notably on August 22, 2017, when Jaysh al-Thawra/the Revolutionary Army[5] managed to dismantle 12 IEDs in the eastern countryside of Daraa. It also apprehended a cell, affiliated to the Syrian government, which acknowledged its responsibility, through a video footage, about the detonation of several IEDs, including one on the road links the two towns of Saida and Western Ghariyah, on 9 April 2017, which resulted in the death of three Syrian opposition fighters.

This what Abu Bakr al-Hasan, the spokesperson of Jaysh al-Thawra, confirmed to STJ on October 30, 2017, he said:

"A number of people have been arrested on the background of theft cases, and in the course of the investigation, it appeared that they were connected with the bombings and have confessed their partners’ identities who formed a cell working for the Syrian government forces in the eastern countryside of Daraa province. At the time, we did not announce any information keeping the course of investigations, and finally, during October 2017, the rest of the cell members were arrested, as the detainees would be transferred to Courthouse as it is the ad-hoc authority for sentencing and execution."

"According to preliminary investigations, the Syrian government forces are behind IEDs bombing, which have become a part of their war on the armed opposition-held areas. Syrian forces have used the lull period, which began since the proclamation of de-escalation zones, to intensify the planting of IEDs on the roads, targeting many civil and military personalities to create a chaotic situation. Those IEDs, planed by the Syrian government’s fighters who sneak through at night or by its hired agents, have a high accuracy because they depend on a highly sophisticated technology, as it relies on optical sensors to explode when any impediment passes after giving the circuit the order of detonation. Such IEDs are often camouflaged as stones similar to those in the target area. Currently we are working to make the checkpoints deployed on the roads more effective and we will rely on public road patrols to curb IEDs detonation."

Images show an IED after it was dismantled in eastern countryside of Daraa
Photo credit: Activists from Daraa