April 20, 2022 1k views Download as PDF This post is also available in: Arabic Font Size A A A 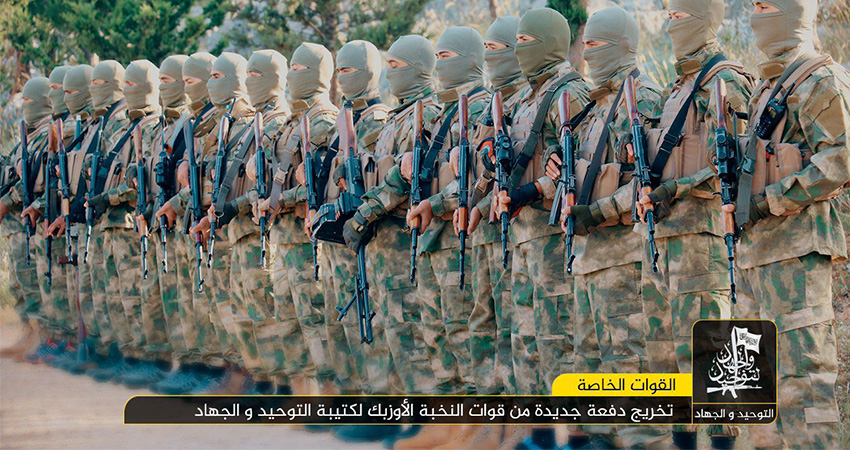 An image of a graduating cohort of Katibat al-Tawhid wa-l-Jihad 'special forces,' 2018.
Background

On 7 March 2022, the United States declared Idlib-based jihadi faction Katibat al-Tawhid wa-l-Jihad (‘Tavhid va Jihod’ or KTJ) a terrorist organization. In addition to the US’s Specially Designated Global Terrorist (SDGT) list Katibat al-Tawhid wa-l-Jihad was placed on the United Nations Security Council’s ‘ISIL and al-Qaida Sanctions List,’ meaning all UN member states are now required to implement an asset freeze, travel ban, and arms embargo on the organization and its membership. According to the U.S. Department of State this decision was due to the Katibat al-Tawhid wa-l-Jihad’s alleged affiliation with al-Qa‘idah, its cooperation with several other designated terrorist groups such as Hay’at Tahrir al-Sham (HTS), and it being linked to several attacks outside of Syria since 2017.

Katibat al-Tawhid wa-l-Jihad, also known as “Jannat Oshiklari” (‘Lovers of Heaven’), ‘Tavhid va Jihod,’ or KTJ, is a small jihadi organization primarily made up of ethnic Uzbeks and other foreign fighters from Central Asia. The group was created at some point in 2013 or 2014 out of a jama‘at of Uzbeks affiliated with Jabhat al-Nusra and its ally Katibat al-Imam al-Bukhari, the largest Uzbek-run jihadi faction in Syria. The reasoning behind Tavhid va Jihod’s initial formation as an independent group is unclear, for it remained close with Jabhat al-Nusra ever since, formally pledging bay‘ah to Nusra (and al-Qa‘idah) in September 2015.

Since Tavhid va Jihod’s formation in 2014 it has operated across opposition-controlled Northwest Syria. Its fighters have participated in numerous battles fought against the regime over the years, from Jisr al-Shughur and Latakia in the west, to various fronts across Idlib and northern Hama, to Aleppo in the east. Most recently Tavhid va Jihod fighters have been seen manning the frontlines in Jebel al-Zawiyah, around the Aleppo-Idlib border near al-Atarib, and in the mountains of Latakia.

As with other small muhajirin factions, many Tavhid va Jihod fighters have combat experience outside of Syria and carry out various specialized tasks such as serving as inghimasi shock troops and or in sniper squadrons.

Like all armed factions in northwestern Syria, Tavhid va Jihod primarily operates Soviet-era Russian and Eastern European-produced weapons, either captured over the years from the Syrian army or bought on the Idlib black market. At times its fighters have been seen using Turkish and American made weaponry.

These most likely stem from stockpiles of other groups in Idlib that have since been sold to or seized by jihadi factions. Tavhid va Jihod’s possession of such weaponry, including a plethora of Anti-Tank Guided Missile (ATGM) systems implies that it is relatively well funded, likely through clandestine donations by supporters over the internet. On at least one occasion Tavhid va Jihod has been seen operating a Suicide Vehicle-Borne Improvised Explosive Device (SVBIED). This occurred on 1 March 2020 when a KTJ fighter blew himself up in a car bomb attack targeting a regime position during the defense of Jebel al-Zawiyah.

According to a source of STJ’s within an Idlib opposition faction, Tavhid va Jihod’s members and largely reside in Jebel al-Summaq and in the Jisr al-Shughur countryside and maintain a distance from local civilian life. The source estimated that Tavhid va Jihod fields approximately 500 fighters, the majority of whom are ethnically Uzbek or Tajik, many from the Fergana valley. Ali al-Hamwi, an expert on Islamic groups in Syria placed the number higher, at 1,200, and told STJ that many of them gained fighting experience in Afghanistan, in support of the Taliban against the US military. One noteworthy aspect of Tavhid va Jihod’s membership is the group’s repeated claims to attract new recruits from abroad, a quite rare phenomenon since Turkey clamped down on cross border traffic in and out of Syria beginning in 2014. These claims correspond with reports of Tavhid va Jihod recruitment networks still active in Central Asia.