A school, a clinic and civilian houses were the targets of the Turkish attacks on the village of Qesirdib in Al-Malikiyah/Derik on 10 and 11 October 2019

Partial damage in a school caused by Turkish artillery attacks on the village of Qesirdib in Al-Malikiyah suburbs, al-Hasakah, on 10 and 11 October 2019. Photo credit: STJ.

Turkish army carried out attacks on civilian objects in the suburbs of the city of Al-Malikiyah/ Derik, in northeast Syria, at the Syria-Turkey borders, on 10 and 11 October 2019. The attacks came in the context of the ‘Operation Peace Spring’ launched by Turkey and allied National Army on October 9, 2019.

STJ field researchers verified three attacks at least in which artillery  and mortar shells were fired on a school, a clinic and civilian houses in the villages of Qesirdib and Ein Deewar in Al-Malikiyah suburbs. The attacks took place on 10 and 11 October, resulting in material damage and leading to suspension of the school hours and the clinic work, as well as causing panic among the people of the two villages which prompted a number of them to flee.

STJ field researcher said that the village was hit by three attacks, in which both heavy and light weapons were used such as artillery  and DShK, targeting civilian houses.

Artillery  hit the village school one day after the announcement of the Operation Peace Spring, October 10, 2019, rendering it partially damage; though away from any military posts or headquarters and never been used for military purposes.

A villager noted that the school was likely be targeted because of the two construction vehicles- belong to a civilian contractor- which were stopped near it then. A Turkish reconnaissance aircraft was downed over the village on October 9, which led the village to be bombed intensively the next day. 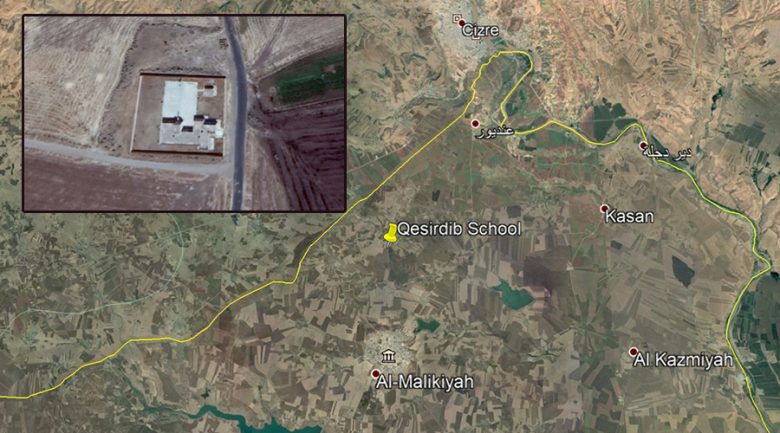 Image (1) the location of Qesirdib school for Al-Malikiyah, taken from Goofle Earth. 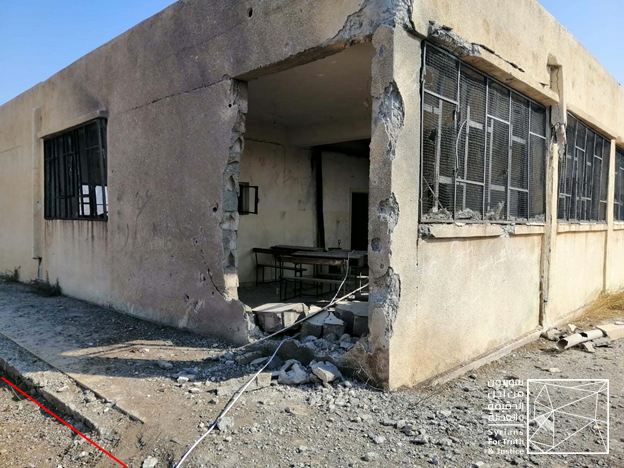 Image (2) a side of destruction caused to the school. Credit: STJ. 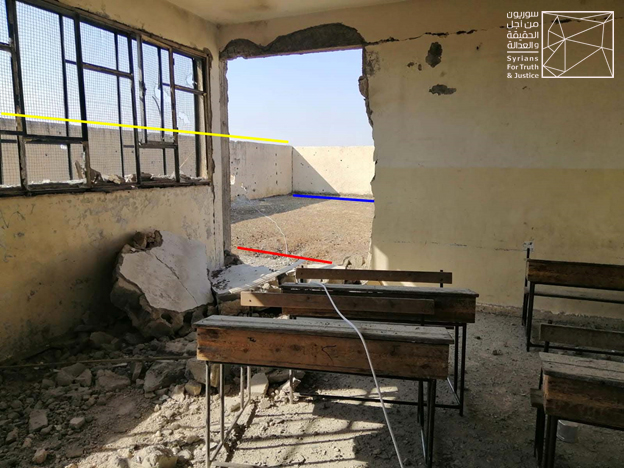 Image (3) a side of destruction caused to the school. Credit: STJ. 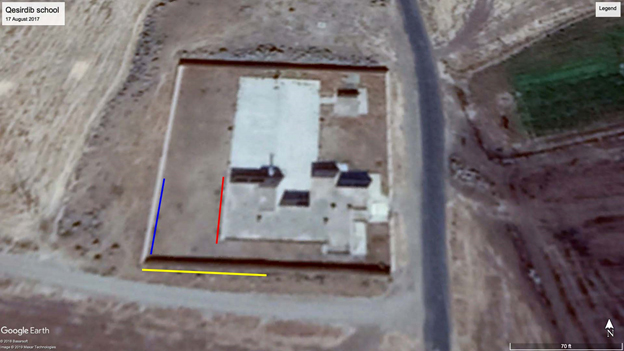 Image (4), the location of the school attacked, taken from Google Earth. The corners of the two previous and next images have been linked to show exactly where the damage is. 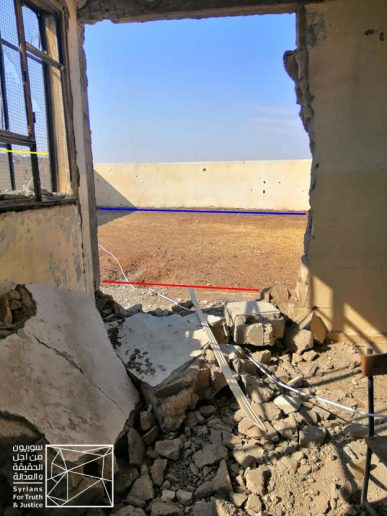 Image (5) a side of destruction caused to the school. Credit: STJ.

A screenshot from a footage released by North Press Agency. 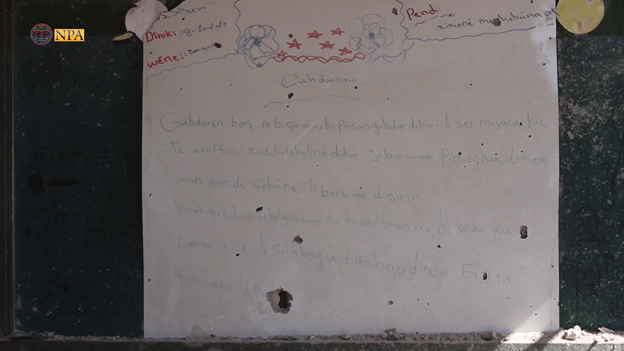 Image (6) damage caused to a classroom. 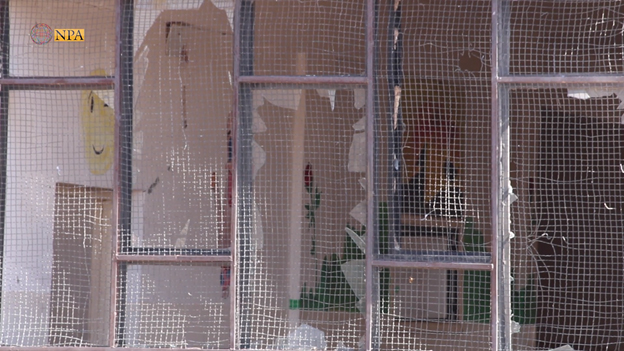 Image (7) damage caused to a classroom.

The village of Ein Deewar witnessed several attacks with artillery throughout October 11, 2019. Shells landed in three houses of civilians and in the courtyard of the village clinic.

Civilians from the village provided STJ with three footages show the destruction caused to their houses by artillery shells, whose remains appeared in one of those videos.

“Artillery  fire rendered the Ein Deewar clinic inoperable, though it only minorly damaged, but the fear and panic it incited among the medical staff prompted them to cease work. Shelling also led a part of the village’s people to flee. The same happened in the clinic of the village of Derna Aghi.”

STJ field researcher noted that there are no military posts around the clinic and no military vehicles or troops were stationed near it when targeted, according to a local. 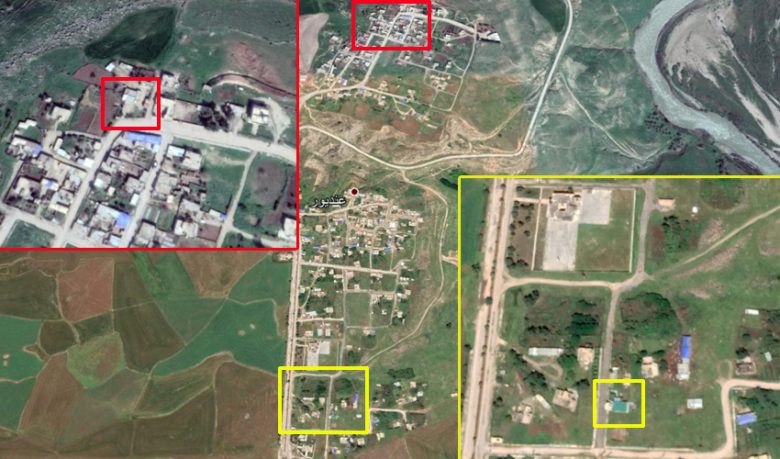 Image (8) the yellow square illustrates the location of the first house attacked and the red one shows that of the second.

Image (9) shows remains of the shells which hit the first house and a side of the damage caused it. Credit: STJ.

A screenshot from a footage released by ANHA shows the destruction caused to the second house. 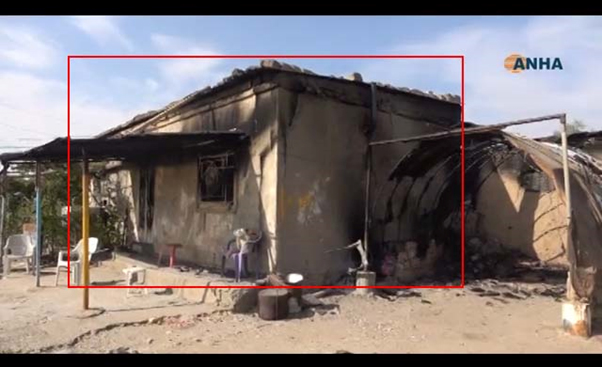 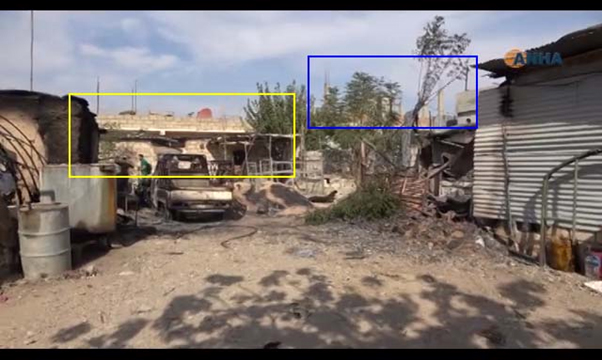 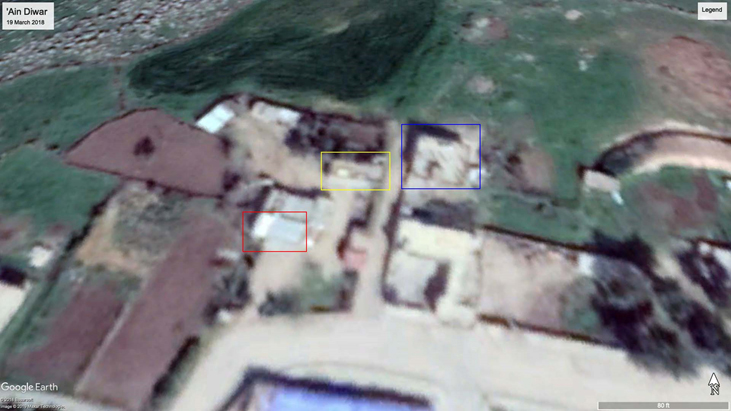 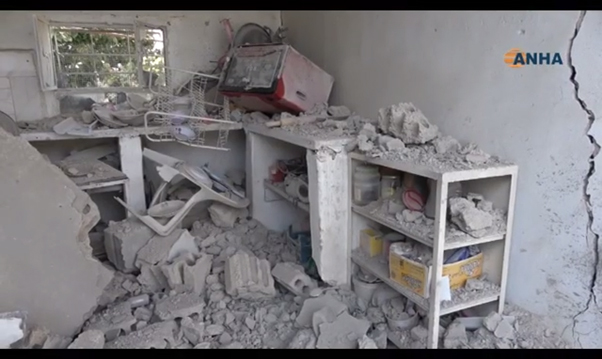