Rumors prompted more Syrians residing in areas controlled by the Autonomous Administration to cross illegally into Turkey, where many were tortured and killed 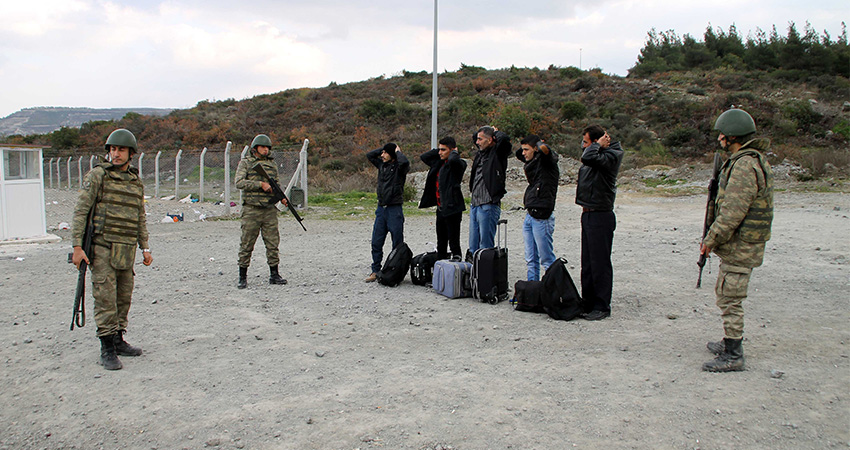 Rumors that Turkish border guards only allow the Kurds to pass the borders safely explain why 21 out of the 28 cases we documented where people safely crossed were people from the Autonomous Administration area in northeastern Syria. The rest of the cases were of Syrians from areas controlled by the Syrian National Army (SNA) and Hay’at Tahrir al-Sham (HTS).

According to workers in the Syrian-Turkish crossing points, Turkey re-suspended the entrance of Syrians, including those in critical conditions, into its territories in late October 2021. The decision has led many Syrians to seek illegal routes, mostly dangerous, to access Turkey through smuggling networks. Smugglers coordinate with the military forces in control of the border areas to facilitate their smuggling operations in exchange for money.

Notably, a few years ago, Turkey restricted the entrance of Syrians into its territories following the controversial deal reached between Ankara and the European Union in 2016. The deal obliged Turkey to stop the flow of irregular migrants to Europe in exchange for a commitment from Europe to grant Turkey six billion euros in aid for Syrian migrant communities on its soil, reduce visa restrictions for Turkish citizens, and re-energize stalled talks regarding Turkey’s membership to the European Union.

Consequently, in November 2017, Turkey finished building a 911 km. wide and four meters high “security wall” along the border cities of Hatay, Kilis, Gaziantep, Urfa and Mardin. The wall was completed even as Turkish officers’ continued declarating  that Syrians fleeing the fighting were welcome in Turkey, and that Turkey maintains an open-door policy.

International law promotes and protects human rights through two basic legal frameworks, international humanitarian law (IHL)—also known as the law of war or the law of armed conflict, and international human rights law (IHRL). IHL applies to armed conflicts, international or non-international, regulates and restricts the used warfare means and methods. These restrictions and responsibilities are imposed on all parties to the conflict to limit the conflict’s effects and protect persons not taking part in the hostilities, including civilians, or those who no longer participate in the fighting, or are no longer capable of fighting, such as wounded combatants and prisoners of war. The IHL seeks protection based on two main sources, namely the Law of Treaties and the Customary Law. The first consists of a set of rules stipulated in related international treaties, such as the Hague Conventions, the Geneva Conventions and their Additional Protocols that bind the signatory states.[1] The second—known as the Customary IHL—is a set of rules derived from the general practices of states in pertinent cases throughout history, which are accepted as law and are universally binding.[2]

For its part, IHRL aims mainly to protect individuals, and some groups to a certain extent, from arbitrary practices their governments might perpetrate against them. It is considered more complex and detailed in terms of the rights it stipulates, the obligations of the contracting parties, and the mechanisms of implementation and follow-up, based on a set of international and regional covenants and treaties, which in most cases obligate signatory states to include these rights within their domestic laws to ensure their practical and effective implementation.[3] However, the key dimension of the IHRL is that it applies at all times, not only in peace, as is common. IHRL remains valid even in cases of war, authorizing certain exceptions in critical circumstances. The IHRL allows states to suspend a few human rights when faced with extreme states of emergency and armed conflicts, except for fundamental rights that must be respected in all circumstances. These include the prohibition of torture and inhuman punishment or treatment, the outlawing of slavery, and the right to life, among others.[4] The imperative to implement and protect these rights does not conflict with any other legal text or framework, including the law of armed conflict, whether international or non-international. Contrastingly, these two legal bodies are complementary, seeking to protect human beings and preserve their safety and dignity albeit from different angles.[5]

Therefore, the cases of torture and killing documented in this report are evident crimes and blatant violations of several of these civilians’ rights, enshrined in the bodies of the IHL and the IHRL, not to mention additional violations perpetrated against surviving civilians, who were denied their right to asylum and were forcibly repatriated to unsafe conflict zones.

In most of the reported cases, the victims were unarmed civilians, who were not parties in an armed conflict and had not participated in any hostile military activities. Despite this, these civilians were either arrested for approaching the borders or for crossing them to seek asylum or shot at with live bullets with the intent to kill and prevent them from crossing.

In addition to arrests and killing, the detained civilians are subjected to other practices and forms of treatment, which without a doubt, fall under torture, and therefore constitute a clear violation and a crime that is worth accountability based on the Convention against Torture and Other Cruel, Inhuman or Degrading Treatment or Punishment of 1984,[6] which Turkey signed and ratified in 1988.[7]  In Article 1(1), the Convention defines torture as:[8]

“. . . the term ‘torture’ means any act by which severe pain or suffering, whether physical or mental, is intentionally inflicted on a person for such purposes as obtaining from him or a third person information or a confession, punishing him for an act he or a third person has committed or is suspected of having committed, or intimidating or coercing him or a third person, or for any reason based on discrimination of any kind, when such pain or suffering is inflicted by or at the instigation of or with the consent or acquiescence of a public official or other person acting in an official capacity. It does not include pain or suffering arising only from, inherent in or incidental to lawful sanctions.”

All forms of torture and inhuman treatment are absolutely prohibited in all international laws and norms, because “No exceptional circumstances whatsoever, whether a state of war or a threat of war, internal political instability or any other public emergency, may be invoked as a justification of torture.”[9] Torture is considered a violation of the IHL, and its perpetration is a war crime, regardless of the nature of the armed conflict, whether it is of an international[10] or non-international character.[11] According to the testimonies obtained for the purposes of the report, the Turkish border guards systematically punish these refugees by torture or even killing, and forcibly return those who remain alive to Syrian territories without any consideration for their status as asylum seekers. This act is a violation of the first clause of Article 3 of the Convention against Torture, which states that: “No State Party shall expel, return (“refouler”) or extradite a person to another State where there are substantial grounds for believing that he would be in danger of being subjected to torture.”[12] The Turkish state did not only forcibly return these civilians to Syria, which is considered an unsafe country but also tortured them. Turkey is thus evidently weaponizing systematic torture and killing on the border and using them as means of punishment or systematic revenge against Syrian civilians and asylum seekers in particular.

In their turn, killing cases, including those resulting from torture, direct targeting, and unlawful executions at the borders, constitute a blatant violation of the victims’ right to life, the legal frames that ensure that they are not arbitrarily deprived of this right, and the legal frames discussed above.[13] This violation should be understood in the context that all people, particularly detainees, have the right to life and personal safety from all forms of torture and inhuman treatment, which are rights guaranteed by the IHL and IHRL in times of peace, as well as war.

[1] For a full view of the above-mentioned treaties, refer to the ICRC website’s section: Treaties, States Parties and Commentaries.  https://ihl-databases.icrc.org/ihl

[2] For a full view of the law, refer to the ICRC website’s section: IHL Database. https://ihl-databases.icrc.org/customary-ihl/eng/docs/home

[3] UN, the Foundation of the International Human Rights Law: https://www.un.org/en/about-us/udhr/foundation-of-international-human-rights-law#:~:text=The%20Universal%20Declaration%20of%20Human,binding%20international%20human%20rights%20treaties.

[5] ICRC, “What is the difference between IHL and human rights law?” (22 January 2015), https://www.icrc.org/en/document/what-difference-between-ihl-and-human-rights-law

[6] The Convention against Torture and Other Cruel, Inhuman or Degrading Treatment or Punishment of 1984: https://www.ohchr.org/en/instruments-mechanisms/instruments/convention-against-torture-and-other-cruel-inhuman-or-degrading

[8] The Convention against Torture and Other Cruel, Inhuman or Degrading Treatment or Punishment of 1984: https://www.ohchr.org/en/instruments-mechanisms/instruments/convention-against-torture-and-other-cruel-inhuman-or-degrading

[12] The Convention against Torture and Other Cruel, Inhuman or Degrading Treatment or Punishment of 1984, Article 3(1): https://www.ohchr.org/en/instruments-mechanisms/instruments/convention-against-torture-and-other-cruel-inhuman-or-degrading

I am one of those who were shot by the Turkish army, and on one occasion I was arrested and severely beaten until blood ran out of my head and I could not walk for a month