If characterized as an “attack”, the council’s assault might amount to a war crime within the meaning of the Rome Statute

November 3, 2022 121 views Download as PDF This post is also available in: Arabic Font Size A A A 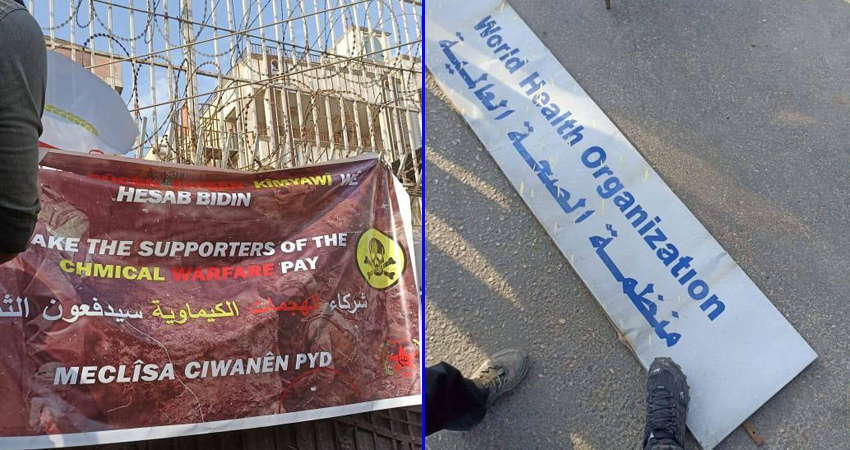 At around 3:30 P.M. on Wednesday, a group of about 20 persons assembled in front of the office of the World Health Organization (WHO) and an adjacent civilian building. The group held a sign, reading: “Partners in chemical attacks shall pay the price”, in Arabic, Kurdish, and English.

Below the writing, the Youth Council of the Democratic Union Party (PYD) inscribed its name.

Investigating the incident, Syrians for Truth and Justice (STJ) reached out to eyewitnesses. Interviewed online, the witnesses confirmed that two of the group members climbed up the door to the WHO’s office and installed a sign they had there, while others threw yellow paint-filled balloons at the office’s front, unhinged a WHO sign, and destroyed a nearby billboard.

The witnesses added that the group threw similar balloons at the entrance to the office of the United Nations Children’s Fund (UNICEF). They also shattered the windows of a guard post of one of the assaulted offices and destroyed its contents, using sticks and stones.

The group dispersed after a member made a brief speech, condemning what he described as “the international silence about the Turkish attacks.”

The eyewitnesses pointed out that the incident spanned less than half an hour, after which the group left the place in three civilian cars. They added that a patrol of the Internal Security Forces (Asayish) passed by the assembly but did not intervene to address the situation.

Notably, the assembly happened the same day the PYD issued a statement holding the international community responsible for what they called “terrorism the Turkish regime is practicing.”

The statement came in the aftermath of the death of 17 male and female fighters of the People’s Defence Forces (HPG) in Turkish attacks, which the PYD claimed were carried out with “chemical weapons”.

Notably, the fact that the Syrian State/ government is the primary subject to these provisions and that it currently does not exercise effective control over the areas where the assaulted UN facilities are located does not exempt the Autonomous Administration from its commitment to these principles, especially as they are a reflection of customary international law.

The obligations, ascribed to the Autonomous Administration in the context of the current armed conflict, impose on it the obligation not only to prevent assaults and/or attacks, such as the one reported, but also to seek accountability for it. These obligations are pursuant to the duty of all parties to ensure respect for international humanitarian law (IHL) during armed conflict, since the assaulted UN facilities were not used for any military purposes.

It is worth noting that the violence perpetrated against the UN facilities does not fall under “collateral damage” as defined in IHL, which prescribes that such damage might happen during hostilities and attacks against legitimate military objectives.

Therefore, should the council’s assault be classified as an “attack”, it might as well qualify as war crime within the parameters of Article 8(2)(e)(iii) of the Rome Statute founding the International Criminal Court.