Syria/Libya: Complaint to the UN Working Group on the Use of Mercenaries

Syrian organizations address the grave consequences mercenarism has for the families of recruits, particularly the practice’s adverse impact on women and children 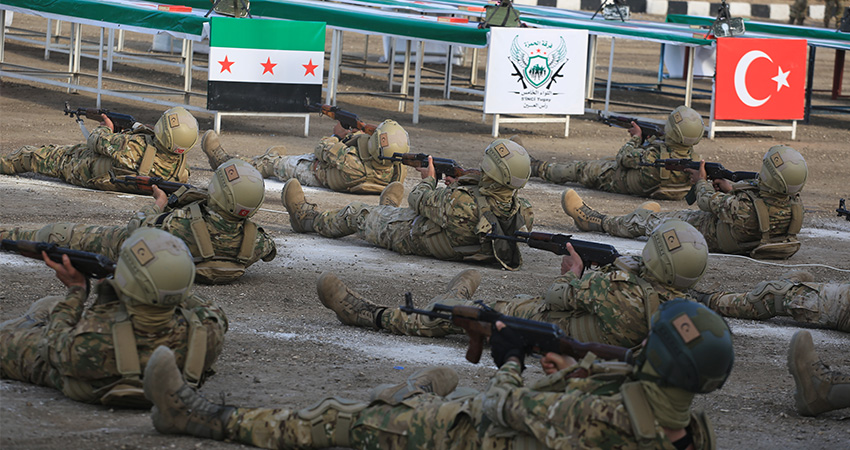 A photo of newly graduated soldiers of the Hamza Division, a faction of the Syrian National Army (SNA) in Ras al-Ayn/ Serê Kaniyê on 07 December 2021. Credit: Anadolu Images.

Syrians for Truth and Justice (STJ), the Syria Justice and Accountability Centre (SJAC), Hevdestî Association for Victims in North and East Syria, and other local Syrian organizations presented an update to their previous reporting on the recruitment of Syrians for mercenary combat abroad.

Our organizations provide new documentation regarding the recruitment of Syrian children for mercenary combat, the negative social impact on families of recruits, the false promises of citizenship to recruits and their families, and lack of health care for wounded mercenaries.

As the role of Syrian mercenaries in foreign conflicts are discussed globally, our reporting provides new insight into the processes of mercenary recruitment and the impact of mercenarism on families and communities in Syria when mercenaries do, or do not, return home.

One of STJ’s lead researchers, who conducted multiple interviews for this report, sees the report as one way to shed light on the reasons that push Syrians towards mercenarism, making it possible to begin conversations about how to stop mercenary recruitment. She says:

“The parties that armed Syrians as mercenaries exploited them when they were at their most vulnerable. It was easy to turn them into what they are now. The bad economic conditions played a major role in the process.”

In 2020 and 2021, STJ and SJAC documented the methods by which Turkey and Russia and their local partners in Syria had recruited mercenaries primarily for combat in Libya and Azerbaijan. The documentation revealed how the predatory system of recruitment in Syria was enriching criminal militias–especially in the Turkish-backed Syrian National Army (SNA)–that were committing egregious human rights violations in Syria as well as the foreign battlefields to which they were being sent.

This submission comes after conflict in Azerbaijan has ceased and UN-brokered talks have initiated the repatriation of foreign fighters from Libya. However, approximately 5,000 mercenaries remain in Libya, while the dire humanitarian conditions in Syria that incentivized mercenary recruitment in the first place have only worsened.