The RY recruited 45 minors, went unchecked by any serious action from the authorities 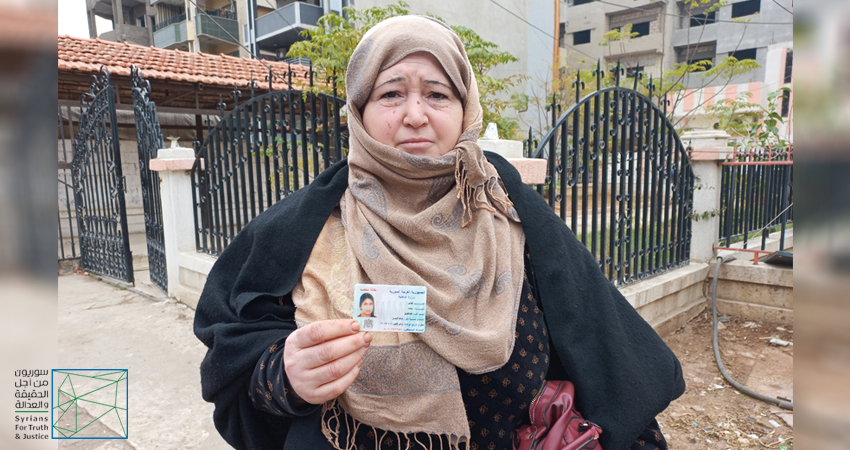 A Kurdish woman holds up the ID card of her only daughter, who was recruited by the RY, at a sit-in in Syria’s northeastern city of Qamishli/Qamishlo. Credit: STJ.

The al-Shabiba al-Thawria/Revolutionary Youth (RY) armed group[1], active in the areas of the Autonomous Administration of North and East Syria (AANES) continues to recruit minors into its ranks without restraint. The AANES and its security forces remained silent over the RY violations taking none of the expected actions like curbing or banning the group’s activities or closing up its headquarters. Despite pledging to halt all recruitment and participation of those under 18 years of age in armed groups, the Syrian Democratic Forces (SDF) and the AANES have still not taken action toward fulfilling that pledge. The AANES security offices even refuse to register complaints against the RY by families of children enlisted.

The present report sheds light on the RY’s ways of tempting children into recruitment and hence keeping them from their families. As well, the report will touch on the AANES’ security forces’ failure to respond to complaints against the RY’s practices.

Syrians for Truth and Justice (STJ) monitored the RY child use in Manbij and Ayn al-Arab/Kobanî and documented several cases of child soldier recruitment. However, only five families of the children recruited agreed to testify to STJ while others refrained, for fear of the RY’s reprisal.[2]

This report is not the only one documenting the RY child use; STJ has earlier published several reports on this regard, including the one dated 26 July 2022, which uncovered the involvement of the RY in 27 out of 29 child recruitments in northeastern Syria over the first half of 2022. Keeping tabs on the violations against children, STJ documented 20 child recruitment – the RY is to blame for 18 of which – in the second half of 2022.

In total, STJ was able to document no less than 49 cases of child recruitment in the AANES areas over 2022.

Information obtained by STJ confirmed that the RY lured children between the ages of 14 and 18 with fake announcements of holding entertaining activities, like free photography and football courses, to attract them to its headquarters, located in near the municipal stadium in Manbij. Once a child gets into the headquarters to inquire about a course or register for it, he disappears and never returns home.

Some of the documented child recruitment cases

Taher was born in 2007 in Manbij. He was recruited by the RY in November 2022. A relative of Taher testified to STJ:

“Taher was doing the preparatory year of the secondary certificate examination and working in his father’s shop at the same time. Taher was interested in cameras and photography and he wanted to get into the media field. One day, the RY announced the launch of a free photography course. Taher heard about the course and told his friend while on their way back from work that he wanted to go to the RY headquarters to register for it. The two guys went to the headquarters; Taher get in and his friend waited for him outside. More than an hour passed and Taher did not get out, so the friend called his parents and told them what happened. Then, Taher’s parents went to the RY headquarters to inquire about him but the members denied having him. As such, Taher’s parents went to the Asayish headquarters to file a complaint about their son’s disappearance but the employees there refused to register it. Thereafter, Taher’s parents headed to the Child Protection Office in Manbij, where the employees said to them: “We can do nothing for you; those whom the RY take do not return. Taher has a chronic disease that makes him unable to endure physical exertion; this is what frightens his family the most about him. We hope that the RY will return Taher to the embrace of his family.”

Fadi is a year younger than Taher and he also hails from Manbij. Fadi was recruited by the RY in November 2022. A relative of Fadi recounted to STJ:

“Fadi used to visit his friends at the RY headquarters frequently. On the day of his disappearance, he told his mother that he would go to them, but he never came back. When Fadi was late, his parents went to search for him at the RY headquarters, but members there denied knowing his whereabouts. Later; however, the RY sent Fadi’s family a video showing Fadi among its ranks. The RY claimed that Fadi joined it on his own accord.”

Farid was born in 2007 in Manbij. He was enlisted by the RY in August 2022. A relative of Farid recounted to STJ:

“Farid left his home at noon and did not return. His family searched for him in hospitals, at the Asayish headquarters, and in his friends and relatives’ homes but without avail. Afterward, the family learned from a friend of Farid that the latter went to the RY headquarters to register for a course in media and photography. The family rushed to the RY headquarters and asked about Farid but the members claimed to know nothing about him. However, after two days, the RY admitted that it enlisted Farid in military training, promising to return him in a month. The family demanded the RY to return Farid immediately because he is a minor. The family feared that the RY would send him to the Qandil Mountains. Days later, members of the clan to which Farid belongs, protested in front of the RY headquarters and blocked roads, demanding the return of Farid. Then, an officer in the Manbij Military Council of the SDF, called Abu Juan, interfered and negotiated with the protesters reaching a deal of returning Farid after five days in exchange for ending the protest. Unfortunately, the deadline expired and Farid did not return. The RY told Farid’s family that he was attending military training in al-Hasakah province and he would get back as soon as possible. The family believes that the RY lured Farid into joining its ranks and thus they call on the human rights organizations and children’s organizations to interfere to return Farid.”

Mohsen was born in 2006 in Manbij. The RY lured Mohsen to its headquarters with the promise to register him in a football academy in November 2022. A relative of Mohsen testified to STJ:

“Mohsen and his friends were watching a match in a stadium near the public park in the city of Manbij. Then, some young men came and persuaded Mohsen to register in a football academy of the RY. Mohsen went with the young men to the headquarters of the RY to enroll in the academy; that was in full view of his friends. Mohsen’s friends waited for him for a while, and when he did not get back, they called his family and told them what happened. Mohsen’s parents hurried to the RY headquarters to inquire about Mohsen, but members there denied seeing him. Afterward, the parents went to the Asayish headquarters to file a complaint on the matter against the RY, but the employees there rejected their request. Parents of Mohsen struggled to know their son’s fate but to no avail; no one helped them with that, even the AANES officials they had begged.”

Fawaz was born in 2005. He lives in Ayn al-Arab/Kobanî. The RY recruited Fawaz and transferred him to Iraq’s Qandil Mountains in June 2022. On this, a relative of Fawaz testified to STJ:

“On the day of his disappearance, Fawaz went to play football with his friends as usual, but he did not return home. Fawaz’s parents went to look for him in the place where he used to play but he was not there. A friend of Fawaz told the parents that a black vehicle with the RY emblem came and took Fawaz. The parents went to the RY headquarters in Ayn al-Arab/Kobanî and asked about Fawaz, but the members there denied having him. However, only a few days later, Fawaz’s parents learned that the RY took Fawaz to Iraq’s Qandil Mountains to attend military recruit training. Fawaz’s parents do not even know whether they will meet him again or not.”

STJ recommends the AANES and the SDF to:

[1] The group is locally known as ‘Taveras Ciwanên Şoreşger’ and it is licensed by the AANES.

[2] STJ used pseudonyms for witnesses for their safety.