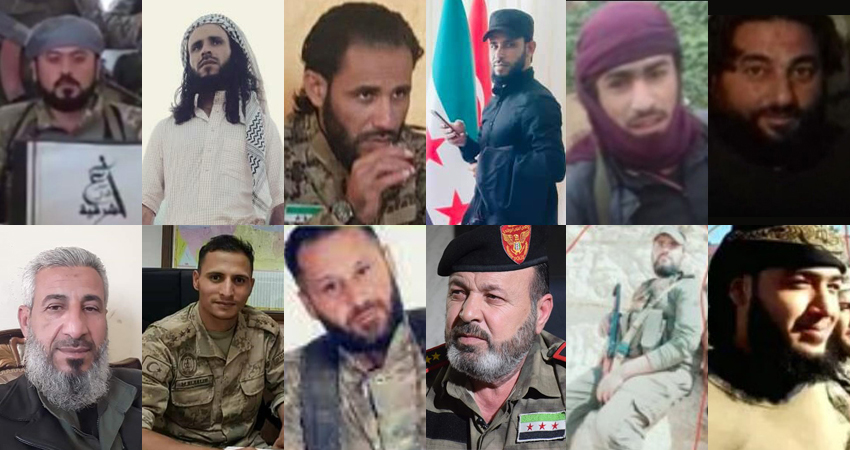 The present report is concerned with the issue of Islamic State (IS) members joining the ranks of the Turkish-backed Syrian National Army (SNA) of the Syrian Interim Government (SIG), operating under the National Coalition for Syrian Revolutionary and Opposition Forces. In this report, Syrians for Truth and Justice (STJ) cites 27 names of former IS members now positioned in the SNA as 11 first and second-level leaders, 6 security officials, and 10 members of different ranks.

We collected detailed information on these 27 individuals as part of a total of 65 former IS members currently active in the ranks of the SNA which we will share with UN bodies. STJ obtained evidence of violations committed by these individuals while they served in IS, and later in the SNA. Furthermore, we identified which SNA groups the individuals joined — many which recruited Syrian civilians and fighters to fight as mercenaries in Libya and Azerbaijan.

While preparing this report, our team noted that the SNA concealed the identity of multiple leaders and fighters in member lists provided to the Turkish government.

For this paper, STJ conducted 28 interviews with leaders and fighters within the SNA and their families, as well as witnesses acquainted with the individuals discussed. This report is a part of a wider effort to collect information on former IS members who are now active in the Syrian territories among various parties in the conflict.

STJ discovered that the following SNA groups include IS members:

The Formation of the Syrian National Army

On 17 May 2016, the National Coalition for Syrian Revolutionary and Opposition Forces elected Jawad Abu Hatab Prime Minister of the SIG.[1][2] Later, on 30 August 2017, the Syrian Islamic Council  and the SIG called for the formation of a united army which combines most of the Syrian opposition armed groups.[3] The Forces of Martyr Ahmad al-Abdo,[4] which is active in the Syrian Badia, was the first group to welcome the call on 2 September 2017.[5] On 4 September 2017 the SIG appointed Jawad Abu Hatab as the Defense minister.[6] On 18 September 2017, the SIG announced the formation of the general staff and the appointment of Abdul Jabbar al-Oqaidi and Hassan Marei Hamadeh as Deputy Ministers of Defense.

Turkey played a decisive and clear role in the formation of the SNA. On 24 October 2017, al-Modon newspaper published a detailed article under the title “Euphrates Shield Armed Groups to a Regular Army” in which it revealed a meeting at the headquarters of the Turkish Special Forces attended by the governor of Gaziantep, the governor of Kilis, the commander of the Turkish Special Forces, representatives of the Turkish intelligence service, members of the SIG, the deputy head of the National Coalition for Syrian Revolutionary and Opposition Forces, and the leaders of SNA groups active in the Euphrates Shield area. The meeting led to multiple agreements,[7] including the conversion of the armed groups from segregated forces to an integrated regular army in two stages.

The first stage was the formation of three corps:

The second stage would strip the armed groups of their names and begin addressing them as one regular army with the following structure:

Why the US Should Expand Sanctions in Northern Syria - Syria Justice & Accountability Centre August 19, 2021 - 5:56 pm

[…] crimes and egregious human rights abuses such as torture, pillage, and arbitrary detention. Recent investigations by Syrians for Truth and Justice (STJ), have shown that former ISIS fighters are now joining many […]