The Turkish authorities arbitrarily detained three Syrian Kurds and deported them to Syria, where they were arrested by the Sultan Murad Division

November 22, 2022 99 views Download as PDF This post is also available in: Arabic Font Size A A A 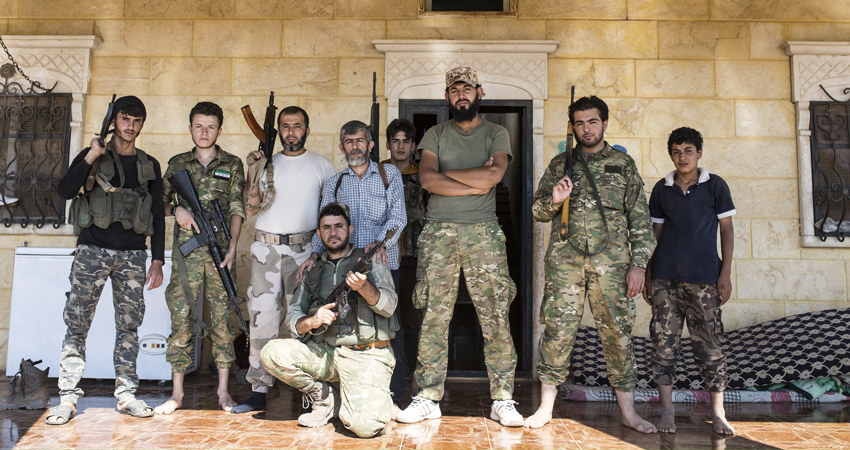 Members of the "Sultan Murad Division" during a military operation in northern Syria. Source: Anadolu Agency

Since early 2022, the Turkish government has been enforcing harsher persecution and deportation measures against Syrian asylum seekers. Along with these measures, Turkish authorities engaged in a chain of refoulement against Syrian refugees, arbitrarily returning thousands to deadly Syrian territories. Some of the forcibly returned had in their possession legal documents that entitle them to stay in Turkey, including a kimlik (Temporary Protection Identification Document).

In Syria, several of the deportees were harassed and even exposed to a wide range of human rights violations, perpetrated by the local de facto authorities.

On 6 August 2022, a Turkish police patrol in Istanbul arrested three Syrian men and arbitrarily detained them for 12 days. All three had kimliks and work permits.

Next, the police transferred them to the Kilis border crossing and handed them over to the Sultan Murad Division. The Division arrested them for several weeks and did not release them until after they paid a ransom.

Investigating the incident, Syrians for Truth and Justice (STJ) reached out to the three men, who agreed to speak on the condition of their anonymity for fear of being re-arrested.

Both the anti-refugee measures and the illegal returns corresponded to a fresh set of policies led by the Turkish government to restrict the influx of asylum seekers. These policies include the government’s announcement that they will not immediately grant Syrians newly entering Turkey the Touristic Residence Permit. Instead, the newcomers will be first relocated to collective camps and be subjected to status “checkups”.

STJ traced the effect of these measures, compiling official figures published by the administrations of Syria-Turkey border crossings, mainly Bab al-Hawa, Bab al-Salameh, and Tal Abyad. STJ found out that approximately 11,000 Syrian refugees were forcibly returned in early 2022. Notably, the reported number does not include asylum seekers captured and returned while attempting to cross the border strip into Turkey illegally.

Monitoring the large-scale deportations, STJ published a lengthy report citing several testimonies and extensive evidence that corroborate the forcible return of over 155,000 Syrian refugees between 2019 and 2021.

This report was backed by another, documenting a new wave of refoulement at the onset of 2022.

STJ asked the three deportees, all Syrian Kurds, about the measures the Turkish police patrol enforced upon arresting them and the conditions of their detention. The witnesses gave matching accounts. The first witness narrated:

“[The three of us] had kimliks, work permits, bank accounts, and cars. We had been living in Turkey for the past eight years and worked in the same factory in Istanbul city. On 6 August 2022, a police patrol showed up at our workplace. The officers audited the identity documents (IDs) of all those present. Then, they asked Kurds to raise their hands. I raised my hand, and so did the other two men. One officer said that they would take us to the police station to verify our identities because they received a report against Kurdish workers in that factory. Before we left the factory, we told them that we were working legally and that we had official documents, in Turkish. They answered that this was only a formal measure.”

“We went with the police. To our shock, we discovered that they were taking us to the Department of Immigration in Tuzla province, not to the nearby police station as they claimed. They held us at the department for 12 days, during which no one took us to interrogation. On day 13, they gave us papers, asked us to sign them, and threatened to keep us in their custody if we refused to sign. When we examined the documents, we learned that they gave us voluntary return papers.  Therefore, we asked them to allow us to withdraw our bank savings, call our families, and ask them to hire us lawyers. They said that our kimliks had already been canceled and our bank accounts were frozen. In response, we refused to sign the papers.”

“After we refused to sign the voluntary return papers, an Anti-Terror force stormed our cell. It was our 20th day in detention. They handcuffed and blindfolded us, and stuffed us into a car. The ride was extremely long and we stopped only twice, during which they allowed us to use the toilet. They also told us that we could buy food if we had money. However, we had no money on us. We arrived at the Turkish side of the Kilis crossing. There, the Turkish police handed us to fighters from the Sultan Murad Division. The fighters transported us to the Bab al-Salameh border crossing, through which we entered the Syrian territories without any official documents.”

“When we got off the car, I asked the Turkish officer, who was standing next to the Division’s fighters, about the reasons for our deportation.  He told me that they received a report, saying we were members of the Kurdistan Workers’ Party (PKK) and that we were planning to carry out blasts. He added that because they did not have substantial evidence, they decided not to bring us before the court and were settled on deporting us only.”

Released in Exchange for Money

The witnesses narrated that the Sultan Murad Division detained them for varying periods in Hawar Kilis village. Two of them were forced to pay lucrative sums of money to one of the Division’s commanders, called Abu Ahmad Aminah, in exchange for their release.

Commenting on the terms of his release, the first witness recounted:

“After [the Turkish police] handed us over to the fighters of the Sultan Murad Division, the fighters took me to interrogation, which focused on our affiliation with the PKK and the blasts we planned to carry out in Turkey. During the investigation, I refuted all the charges. I told them that I had a stable life in Turkey and that I possessed identity documents. They detained me for a month after that investigation. Then, the prison personnel approached me and told me to pay them money in exchange for my release. In the beginning, they asked for 3,000 USD. I negotiated with them, and we settled on a sum of 1,800 USD. My family paid the money to a person called Abu Ahmad Amina. They transferred me to the Division’s headquarters and handed me over to the Civil Police in A’zaz city. The police also asked for money, and I had to pay an additional 500 USD. They released me only after I paid the money.”

The second witness had a similar experience. He narrated:

“After [the Turkish Police] handed me over to the Sultan Murad Division, the armed group held me in their headquarters for two weeks, during which I was beaten and tortured. In every interrogation session, I faced the charge of belonging to the PKK. During one session, the detective told me that he would allow me to call my family, only to tell them that they had to pay 5,000 USD in exchange for my release. Indeed, I called my family. They engaged in negotiations but I am not exactly sure with whom, whether it was with the detective or someone else.  We ultimately paid 4,000 USD to a person called Abu Ahmad Amina. I was relocated to the Military Police Department in A’zaz. The police detained me for a month, during which they allowed my friend to visit me three times. They released me after that month.”

In his turn, the third witness narrated:

“After [the Turkish police] handed me over to fighters of the Sultan Murad Division, they questioned me about several PKK commanders. They showed me pictures, but I did not identify any of the people in them because I left Syria in 2012 and had nothing to do with these issues. I was living in Turkey. I had a life there. They beat me extensively every time I told them I did not recognize the person in the photo. They detained me for three weeks. They asked for my family’s contacts; they wanted to call them. They released me nearly a month after my arrest. Later, my family informed me that a person called Abu Ahmad Amina contacted them and asked for 2,000 USD in exchange for my release. My family could not afford to pay him the money. My family is struggling financially and does not have a source of income. They released me even though I did not pay them.”

Turkey is Violating its International Obligations

Notably, several international instruments, including the European Convention on Human Rights, the International Covenant on Civil and Political Rights, the Convention against Torture, and the 1951 Refugee Convention, establish non-refoulement as a core principle. The principle of non-refoulement prohibits the transfer of a person from one authority to another when there are substantial grounds for believing that the person would be in danger of being subjected to violations of certain fundamental rights, irrespective of whether the danger emanates from State or non-State actors.[2]

Within this perspective, Turkey may not use violence or the threat of violence or detention to coerce people to return to places where they face harm. This includes Syrian asylum seekers, who are entitled to automatic protection under Turkish law, including any who have been blocked from registration for temporary protection since late 2017.[3]