Law No. 1 of 2018 continues to deny Wadi Barada’s people access to their homes and legalize the confiscation and/or destruction of their properties

February 2, 2022 424 views Download as PDF This post is also available in: Arabic Font Size A A A 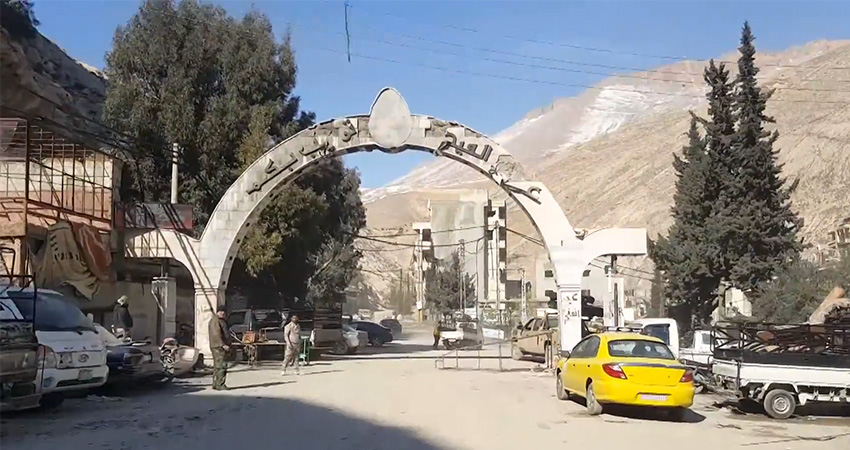 A picture from a video published in January 2017 showing scenes from Ein al-Fijeh.

Five years ago, the forces of the Syrian government (SG) launched a large-scale military operation into three key areas in Wadi Barada (Barada Valley) in the suburbs of the capital Damascus. The hostilities forced locals to flee their homes in the towns of Ein al-Fijeh, Basimeh, and Ein al-Khadara. Most of these people remain displaced, with their efforts to return home hampered by the SG’s manipulation of the laws and the length of time being taken for legal procedures. The SG continues to bar the people from entering the region, delaying the return of some, while denying all access to others using laws and decrees issued in 2018 to instead expropriate their properties.

The SG’s efforts to block people’s return to their homes has been underway since 2017. Following the military operation that ultimately led to the SG’s control over the strategic area of Wadi Barada, locals signed a settlement agreement (a surrender deal) with the SG. Under the agreement, the SG sent the area’s local fighters who refused to legalize their status to northern Syria, accompanied by their families. But most importantly, the SG used the agreement to lay legal grounds for local property confiscations and seizures, especially those in the two towns of Ein al-Fijeh and Basimeh.

Ahead of the confiscations, the SG forces and their affiliated paramilitary groups, including the National Defense and the Qalamoun Shield Forces, carried out extensive looting and pillage operations in the areas of Ein al-Fijeh, Basimeh, and Ein al-Khadara. The SG did not take action to combat the wide property rights abuses or to remedy them, nor did the SG start a proper, open, and transparent investigation into the violations, nor returned stolen or appropriated possessions to their owners. Instead, the SG indulged in other abuses. They demolished or detonated houses and properties belonging to the area’s residents under source water protection (SWP) pretexts. The SG claimed that the properties were demolished in the frame of their intended project to expand the perimeters of the facilities of the Fijeh Spring (Water Station), planning to establish two distinct zones around the water source, a primary zone that immediately encompasses the spring, and a secondary zone that encircles the primary one. The area used for zoning contains local properties, but several of the houses and properties the SG demolished were not located within the geographical range of the spring’s facilities, neither in the primary nor the secondary zones.

In 2018, the SG issued Law No. 1, which proved decisive for drawing the fate of the area and the locals’ property rights. The law legalized the SG’s intended property confiscations in Wadi Barada, particularly in Ein al-Fijeh. The law authorized the seizure of complete properties or parts of the properties that fell within the spring’s primary zone, prohibiting the locals from performing any activities within the marked area, whether for agricultural, industrial, and touristic ends, not even for purposes of trade or urbanization.

In addition to depriving locals of their properties using the law, the SG denied many residents access to their homes using security permits. To be allowed entry into the area, people had to get a difficult-to-obtain permit from concerned security branches in the area. The permits were frequently used to blackmail residents, with security branches even forcing displaced residents to chant pro-SG slogans to get the permits and reach their properties.

Law No. 1, issued on 18 January by the Syrian presidency, changed the former urban planning schemes that targeted Ein al-Fijeh and Deir Muqaran, canceling all areas allocated for residential purposes within the spring’s primary zone, which laid the ground for the eradication of the existing houses. The law promised to provide affected locals with alternative housing and provided for compensations amounting to the real worth of the appropriated and to-be-demolished properties. However, the law remained obscure about the compensation mechanism and its delivery method.

In late 2020, the SG disclosed their plans for the alternative housing project. They proposed relocating the locals affected by the Spring Site Expansion Project to the Wadi Basimeh, which is an agricultural mountainous terrain, located nearly 3 KM away from Ein al-Fijeh.

The targeted locals refused the alternative housing plans because the new destination is remote and underserviced. Most importantly, the people said that they did not approve the relocation because they are not willing to give up on their original places of residence, especially since they were not consulted about the project, nor the fate of their properties.