The arrests made by HTS’ security and police forces, including al-Hisbah, against 5 children, two women and 15 men during August and September 2019 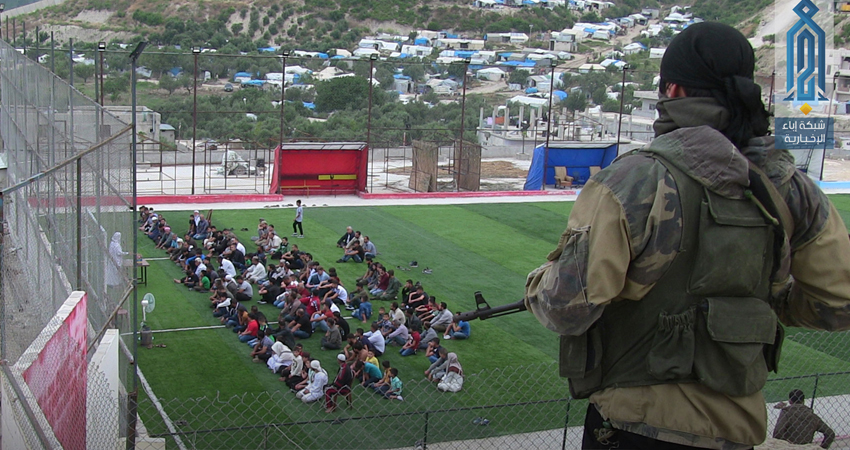 A member of HTS security forces in a routine watch to a Sharia lesson in a sports field northern Syria. photo credit: Ebaa News Agency of HTS.

Hay’at Tahrir al-Sham (HTS), by its religious police, the al-Hisbah and other affiliated forces have arrested five children, two women and 15 men, including activists, in the province of Idlib. The arrests were conducted throughout August and September 2019 for different reasons. The detainees were beaten and mistreated, including the children, and while some of them were released, the rest are still unaccounted for. Further arrests were made by the police force of the Salvation Government of HTS on grounds of alleged criminal cases.

STJ field researchers in Idlib said that those who are directly arrested by HTS or by its affiliated militias; like the police force including al-Hisbah in Idlib, are placed in three kinds of prisons:

According to information collected by STJ field researchers from witnesses and survivors of the arrest, HTS conducts arrests either on its checkpoints, deployed on the roads of the province or by raiding the house of the wanted people by its so-called security office. People arrested in the second way are transferred to special courts called the “special security courts” and are usually placed in one of the aforementioned security prisons.

Another way of arrest used by HTS is by sending a subpoena by its police to the wanted person ordering him to come to the police station in a specified period, and if the latter failed to attend, a patrol be sent to capture him/her from his/her house. those arrested this way are mostly accused of misdemeanors like shooting in celebrations or fights. They are brought before the judiciary of the Salvation Government, which sentenced them and then they are transferred to Idlib central prison, where they serve their sentences.

It should be noted that the recent prison sentences issued by the Ministry of Justice of the Salvation Government included compulsory labor in digging trenches to reinforce the front lines and fortified the defense sites and strengthen them. These works have become part of the punishments after the military operation launched by the Syrian government and Russia on Idlib province in April 2019, which is still ongoing, added to other harsh and degrading punishments such as flogging.

HTS and Salvation Government courts rely mainly on the provisions of Islamic Sharia in the issuance of judgments in all cases. Those courts never adopt positive law as other courts in other Syrian regions do.

HTS also requires the prisoner to complete a Sharia course before being released. According to local sources and witnesses, contents of this Sharia course differs depending on the arresting authority; those arrested by the police force of the Ministry of Justice including the religious wing, al-Hisbah, are forced to memorize a section of the Quran in addition to 40 hadiths from the Al-Nawawi’s Forty Hadith. While those arrested by the security forces are forced to memorize at least three section of Quran along with all the hadiths and lessons in Fiqh and Islamic studies. A former detainee said that some were forced to memorize the whole Quran for their prison sentence is long.

A trial summary of a prisoner, who was released in September 2019, issued by the Salqin court of the Ministry of Justice of the Salvation Government in February 2019. The document shows the felony committed and the due penalty, which include three hundred lashes.

STJ field researchers documented several arrests carried out by HTS and its al-Hisbah police against civilians. They also talked to relatives of some of the detainees, who preferred Anonymity for security reasons:

“Members at an HTS temporary (flying) checkpoint on the road to the town of Muhambal, shot my brother directly in the leg and the abdomen. Then they took him to a hospital in the city of Jisr al-Shughur. When we learned about the incident, we rushed to the hospital, where my brother was admitted in another name. however, when we managed to know his place, they moved him by their car; we tried to follow them but they set a temporary checkpoint on the way.”

“The next morning, we learned that my brother was in Idlib Hospital. I went there and asked the information desk workers for him, but they said that there was no such person. So, I went and searched for him in the patients’ rooms and found him in one of them, but the guards prevented me from talking to him. However, after several hours a Qatari Red Crescent car accompanied with HTS members, arrived to the hospital and took my brother without the permission of doctors and without considering his health status. We are still searching for him in all hospitals as he is admitted with a false name.”

The witness confirmed that Mohammad Jadaan was not wanted to any authority and that he was not at odds with the HTS. Besides no subpoena was sent to him, contrary to the claims of HTS members about being wanted for a security issue. “I hold the Qatari Red Crescent responsible for the safety of my brother and what is happening with him as they drove him to an unknown location.”, said the witness.

HTS had earlier carried out executions in the provinces of Idlib and Hama,[1] while its Sharia courts and affiliated Islamic groups had tried and executed defendants.[2]