Case Study: The Laws and Mechanisms Underlying the Death Penalty in Syria

This case study examines the executions of 24 Syrians, charged with “pyro-terrorism”, the violations the alleged convicts suffered, and their deprivation of fair trials 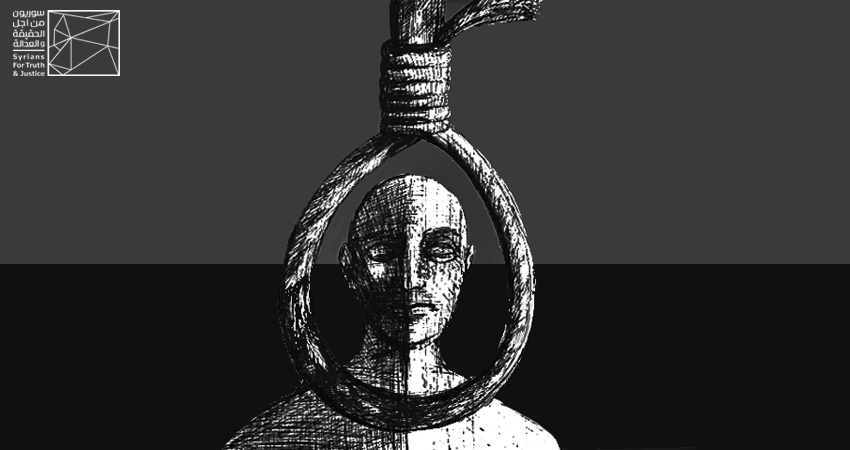 Illustration for death penalty by the Syrian artist: Yara Issa (Syrians for Truth and Justice)

In this report, Syrians for Truth and Justice (STJ) examines several laws and mechanisms that the various courts of the Damascus-based central Syrian government (SG) deploy to issue and implement the death penalty.

To this end, the report provides a case study that analyzes a mass execution the SG carried out against individuals accused of arson in its areas of control.

Additionally, the report sheds light on the roles of the president of the republic, the Counter-Terrorism Court (CTC), and the Special Pardon Committee (SPC) of the Ministry of Justice in enforcing the death penalty, focusing as well on the manner in which death sentences are implemented after they are passed by Criminal Courts.

Based on the case study, STJ concluded that the Syrian judiciary opted for aggravated circumstances by imposing the death penalty against 24 individuals, “convicted” of committing “terrorist acts” – specifically what the SG claims were crimes of arson in several Syrian provinces.

The Syrian Ministry of Justice announced the execution of 24 individuals on its official Facebook page. In the statement, the ministry declared the implementation of the death sentences passed upon the “convicts” in late October 2021, indicating that the “criminals” were executed for committing acts of “pyro-terrorism”.

Notably, the justice ministry did not provide the names of the executed individuals in the statement, nor did it publicize indictment lists of the separate charges passed against them. This shrouded the case with ambiguity and attributed to it a sense of haste, especially as the concerned courts announced the convicts as criminals under the Counter-Terrorism Law No. 19 of 2012 but denied their families access to the charges brought against them. It was upon those charges, shrouded in secrecy and denied from the families, that the convicts were sentenced to death.

The treatment of this case runs at odds with the SG’s common practice, which usually publicizes the names of people sentenced to death, particularly those convicted in cases related to public opinion and which result in massive harm to individuals or society. The change in the execution protocols arouses suspicion that the SG might have implemented a few or all of the declared death sentences against detainees who might not have been the real perpetrators of the fires.

The ministry’s statement also provided the legal frames underlying the executions. The ministry said the concerned courts passed the death sentences in compliance with the Syrian Penal Code No. 48 of 1949, the Syrian Code of Criminal Procedure No. 112 of 1950, and the Counter-Terrorism Law No.19 of 2012. The ministry claimed that the actions of the perpetrators caused death and damages to State infrastructure, public facilities, and private property with incendiary materials.

The death sentences against the convicts were reviewed by the SPC and then ratified by the Court of Cassation.

In addition to the death penalties, the concerned courts sentenced 11 “criminals” to life imprisonment with hard labor, for committing “terrorist acts” with incendiary materials that led to damage to public and private facilities, agricultural lands, and forests. The sentences were passed under Article 7 (1) of the Counter-Terrorism Law.

Ahead of the executions, on 9 October 2021, the Minister of Justice, Ahmad al-Sayyed, issued a circular, recommending that maximum penalties be imposed against all individuals involved in the arsons and that sentences passed against the offenders be carefully monitored and followed up on until litigation in the case had reached its final stage.

Notably, these recommendations are a flagrant infringement by the executive authority (the Ministry of Justice) on the work of the judiciary and interference with the court’s conviction, which has the power to decide to apply discretionary mitigation to the case it presides over.

Contrary to previous circulars, the October circular was unnumbered. This likely means that the justice minister had directly addressed the document to the Attorney General and the courthouses (Palaces of Justice), and that it was not duly archived as other issued or mailed decisions.

In addition to referencing the penalty, the circular instructed the Judicial Inspection Department to follow up on the application of the circular and to inform the justice ministry of any violation of its provisions.

Notably, the SG-affiliated courts passed the death sentences and other penalties against convicts even though the alleged arsons have yet to be fully corroborated as a result of deliberate human action, and not simply rising temperatures and drought.

At the same time, STJ has obtained an account that demonstrated that the SG neglected to respond appropriately to the fires.  Delving into the circumstances of the case, STJ reached out to a farmer from one of the areas affected by the fires. The source narrated that the SG-affiliated departments barely responded in the beginning, adding that they hasted to put down the fires only when locals were outraged, the risk was beyond control, and the area was already critically damaged.