Ayat al-Rifa’i: A Young Woman Victimized by her Family and the Law 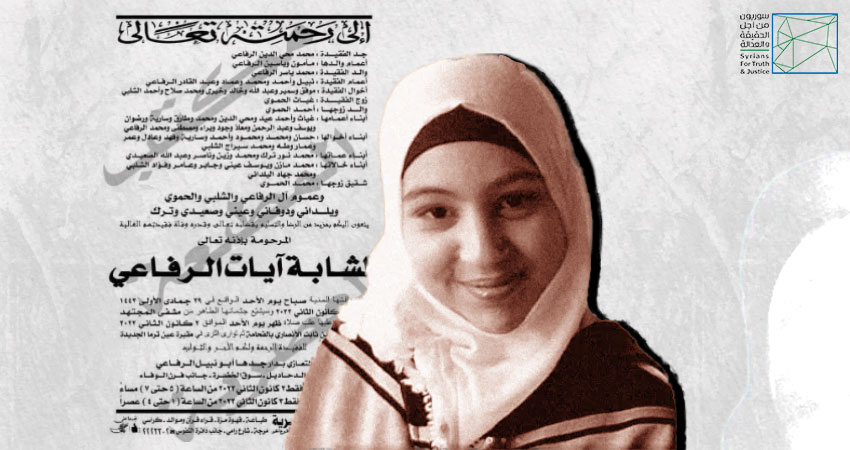 On 7 November 2022, the First Instance Criminal Court in Damascus issued an appealable verdict in the viral case of Ayat al-Rifa’i—a young Syrian woman murdered by her husband, father, and mother-in-law.

On New Year’s Eve in Damascus’s Al-Moujtahed neighborhood, 19-year-old Ayat al-Rifa’i was brought to a Damascus hospital unresponsive. Ayat’s husband and his parents beat her until she lost consciousness. Without medical attention, she died in her room. Her killing went viral on social media, with the hashtag  “the_right_of_Ayat_al-Rifai circulating soon after the Syrian government’s Ministry of the Interior published details of her killing. Months after the perpetrators were arrested, the courts have reached a verdict.

Relaying the details of the verdict, on 8 November, al-Watan, a local newspaper affiliated with the Syrian government (SG), reported that: “the First Instance Criminal Court in Damascus issued a seven-year prison sentence against Ayat Al-Rif’ai’s husband and his father. The court convicted both of the beating that led to her death. Additionally, the court ordered them to pay personal compensation of 15 million Syrian pounds (SYP) to Ayat’s family. Moreover, the court ordered the release of the husband’s mother, sufficing with time she spent on remand.”

For a comment on the court sentence, the newspaper interviewed the First Attorney General, Muhammad Adib al-Mahayni, who elaborated on the process of legal characterization applied to Ayat’s case. Al-Mahayni highlighted that the elements of the crime perpetrated by Ayat’s husband and her father-in-law are consistent with those of beating leading to death, not manslaughter, stressing that the court made the ruling in alignment with the law and due procedure. He added that the victim’s family is entitled to appeal before the Court of Cassation within 30 days.

Notably, the tragic fate of Ayat swept social media in January 2022, urging a response from the Syrian Ministry of Interior. In a Facebook post on 4 January 2022, the ministry revealed that Ayat was brought dead to the al-Mujtahid Hospital in Damascus on 31 December 2021 and explained that her parents filed a claim against their daughter’s husband, saying he and his family beat and ill-treated her.

Additionally, the ministry said that Ayat’s husband and his parents confessed to the constant use of violence against the victim to discipline her.[1] They also admitted that the father-in-law had bit the victim twice on the day she died, using two different canes, one of which had steel pins at one end, while the husband hit her head against the wall and left her unconscious in the room.

The ministry added that the perpetrators attempted to revive Ayat an hour later. When she did not respond, they took her to the hospital. However, she was already dead when she arrived, according to the statement of the emergency doctor.

The Penal Code No. 148 of 1949 distinguishes between the crime of al-Katel al-Qassd (manslaughter) mentioned in Article 533 and the crime of al-Izza al-Mufddi li-al-mout (harm leading to death) mentioned in Article 536, with the difference lying in the criminal intent. The intent refers to the perpetrator’s resolve or determination to commit the act despite knowing that it is a crime.

Article 533 stipulates: “Whoever willfully commits homicide shall be punished with hard labor from fifteen to twenty years.”

For its part, Article 536 stipulates:

“1- Whoever unwillingly causes the death of a person by beating, violence, force, or any other intentional act, shall be punished with hard labor for at least five years;

2- The penalty shall not be less than seven years if the act is associated with one of the cases stipulated in the two previous articles.”[2]

Notably, while they identify varying degrees of homicide, Syrian laws do not designate specific laws to domestic violence. The Penal Code lacks articles specific to domestic and gender-based violence, resulting in the fact that acts under both types are not regarded as criminalizing per se unless they fall within the domain of Articles 544 and 529. These two articles inscribe punishment particularly against actions that cause pregnant women to miscarry.

No Justice for the Victims of Domestic Violence

The murder of Ayat, who was willfully subjected to violence and battered by her partner and his family, is but an episode in the continuing suffering of several Syrian women and girls, who struggle in the throes of domestic violence.[3]

Notably, this vicious circle is maintained by the insufficiency of criminal codes, which fail to address domestic violence as an independent crime. Domestic violence is often treated as an element on the spectrum of punishable acts of violence. There are several articles in the Syrian Penal Code that prohibit and criminalize beating (including Articles 540, 541, 542, 543), but none are designated for violence or abuse perpetrated against women.

The insufficiency of existing legal frames extends beyond the lack of clear texts that criminalize gender-based violence, affecting the application. The violence-related available texts limit the judges’ powers to make decisions or order measures that might bring justice to women subjected to domestic violence. For instance, judges are obliged to dismiss domestic violence charges when the claimant withdraws her complaint, even if a medical report shows she has been subjected to harm. Similarly, the judge has to dismiss the case should the medical report indicate that the harm inflicted on the victim does not render her incapable of working for over 10 days.

In this context, the court’s decision in Ayat’s case remains unfair to the victim and disproportionate to the outcome of the violence practiced on her, despite the fact that it was issued by the court in accordance with the applicable law and due procedures.

[1] For the full confession of the convicts, see the video published by al-Watan newspaper on 6 January 2022. https://www.youtube.com/watch?v=iz5Pp801cXU

[2] The previous two articles are:

Article 534, which prescribes “hard labor for life if homicide is committed for an inferior reason; or to prepare for, facilitate or implement a misdemeanor; or to facilitate the escape of the instigators, perpetrators, or accomplices of that misdemeanor or help them escape punishment; or to gain benefits; or the victim is an employee performing his/her duties; or is  an under-15 juvenile; or is committed against two persons or more; or is accompanied by acts of torture or cruelty.”

Article 535 pushes for a severer penalty for homicide, even prescribing the death penalty in some cases, including “willful homicide; homicide committed in preparation for, to facilitate, or implement a crime; or to facilitate the escape of the instigators, perpetrators, or those involved in that crime, or protect them from punishment, or when it is committed against one of the offender’s ascendants or descendants.”