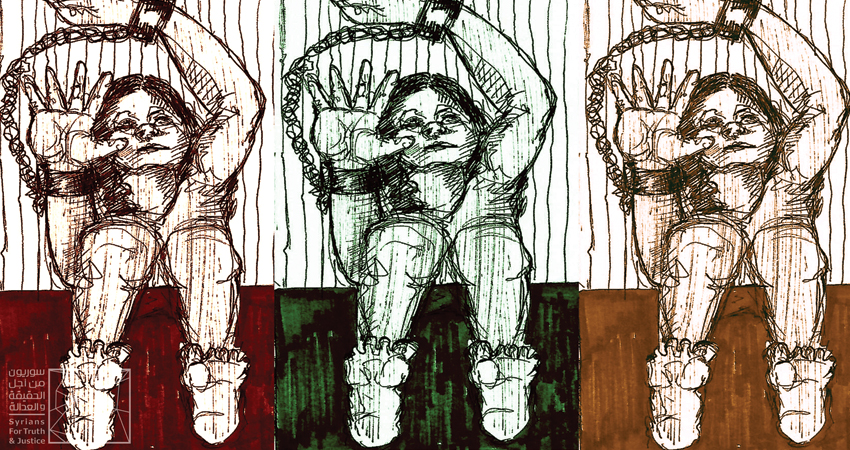 In January and February 2022, Syrians for Truth and Justice (STJ) documented seven female homicides cases, including the murder of a young girl. Six of the recorded murders took place within the government-held provinces of Damascus, Damascus’s countryside, As Suwayda, Tartus and Aleppo, while the seventh was reported in Al-Hasakah, which falls under the Autonomous Administration’s control. The Syrian government arrested and prosecuted five of the six perpetrators of the crimes committed in the areas under its control; however, the murderer in As Suwayda escaped justice.

Two Sisters Murdered by Their Father

On the evening of Monday, 10 January 2022, a horrific murder occurred in the village of Smeid in Ariqa district in As Suwayda by Y. Masoud, 40, against his daughters Wiam, 18, and Mariam, 16. Y. Masoud shot his two daughters then fled. He remains at large. Local sources confirmed that the government has not taken any serious action towards solving the crime, which is being called “honor-related”, allowing the perpetrator to escape justice.

A relative of the two victims told STJ that the two young women were mothers — Wiam had two children, Mariam had one child. Wiam and Mariam’s father killed them in his home while they visited him. The relative recounted:

“On Monday evening we heard gunshots and cries of children from the home of Y. Masoud. A few minutes later, we saw Y. Masoud leaving home and he was completely calm. Then, some neighbors rushed into Masoud’s home and found Mariam and Wiam shot. Mariam was dead but Wiam was not, so was taken to the National Hospital in As Suwayda. However, she died when she arrived at the hospital from the gunshot wound in her head.”

Relatives of the father tried to justify his crime by claiming that it occurred by mistake while he was cleaning his gun. The relative continued:

“Ironically, some relatives of the two victims sympathize with the killer. This was especially true following unfounded rumors that the crime was committed for the sake of honor, which is the pretext used to justify every crime in As Suwayda to secure impunity for the perpetrators. What is worse is that the killer has not been arrested yet — his relatives are hiding him. The father killed his daughters twice. The first time when he married them off when they were only 15, and the second time when he shot them, leaving their children motherless.”

Although the crime was widely condemned in As Suwayda, witnesses claim that Syrian authorities have not investigated the crime thoroughly. The only action taken was to send a magistrate to examine the crime scene.  A local source confirmed to STJ that no lawsuit or public prosecutorial complaint has been filed against the killer. Therefore, if he surrenders himself or is captured, he will be judged for the public right only and the sentence will likely be lightened or abolished by presidential amnesty.

The Syrian Government’s Ministry of Interior stated on its Facebook official page that Maryam and Wiam were killed by their father because they refused to help him with farm work.

A Girl Murdered by Her Brother

On 8 January 2022, in the western neighborhood in the village of Al Ghuzlaniyah of Damascus’s countryside, a young man, Ayoub, attempted to rape his 11-year-old sister, Amal. However, when the victim tried to escape, her brother stabbed her to death and then burned her body.

Syrian authorities arrested Ayoub, who confessed his crime. The Syrian Ministry of Interior published a video that showed Ayoub’s confessions and revealed the circumstances of the incident. Meanwhile, Amal’s body was taken to Al Mouwasat Hospital in Damascus, where it underwent forensic-medical examination which reported signs of a sexual assault.

Ayoub recounted in the published video that he molested his sister and when she refrained, he stabbed her. Amal tried to escape towards the bathroom but he followed her and stabbed her multiple times in the back and neck, killing her. To conceal his crime, Ayoub poured fuel on his sister’s body and burned her, then he washed the knife and left home.

A Woman Murdered by Her Nephew

On 13 January 2022, locals of Dweir al-Shaykh Saad village in Tartus reported a murder of a woman to the relevant authorities. In turn, the Ministry of Interior posted on Facebook details of an incident claiming that a woman called Sawsan Mansour was found killed in her home, with multiple stab wounds to her neck and chest. She was taken to Al-Basel Hospital in Tartus. Reportedly, Sawsan was killed by her nephew, but the investigation is still ongoing.

A Mother Murdered by Her Daughter

On 6 February 2022, Wafa’ A. was found poisoned in her home in Al-Sabil neighborhood in Aleppo. On this incident, the Syrian Ministry of Interior stated in a post on its official Facebook page that Wafa’ was killed by her daughter, Hiba, with the help of a friend called Eman and the victim’s driver, Ahmed. Hiba decided to kill her mother following a dispute she had with her. Eman bought Hiba the poison and Ahmed put it in a drink the victim was having, and then he suffocated her using a pillow. After their crime, the perpetrators stole the victim’s gold jewelry and hid them in Eman’s home. The Ministry of Interior confirmed that the perpetrators were arrested and duly prosecuted.

A Young Wife Murdered by Her Husband and His Parents

On New Year’s Eve, a heinous crime occurred in Damascus’s Al Moujtahed neighborhood against a 19-year-old woman, Ayat Al-Rifai. Ayat’s husbands and his parents beat her severely on the head until she lost consciousness. Without medical attention, she died after an hour and a half in her room. On 4 January 2022, the Ministry of Interior in the Syrian government published details of Ayat’s killing on its official Facebook page. In addition, several media outlets reported the crime and the hashtag #the_right_of_Ayat_ Al-Rifai was widely circulated on social media. The Syrian authorities arrested the perpetrators and brought them to justice.

A Wife Murdered by Her Husband

On January 2022, locals of Mujarjah al-Khanat al-Gharbi village, located near al-Hasakah city, reported a crime to the internal security forces, or the Asayish. The victim of the crime was Fatima Hussein al-Sweedan, 44, who hails from Salamiyah city in Hama. Ghareeb al-Najem, Fatima’s husband, and his brother killed Fatima and secretly buried her. However, neighbors discovered the crime and informed the authorities.

In the course of the investigation, Ghareeb and his brother confessed to killing and burying Fatima. Ghareeb gave several reasons for Fatima’s death.  Initially, he told them that she died of Covid-19, then he claimed she died of food poisoning. However, the Asayish took Fatima’s body to Al-Sha’ab Hospital in al-Hasakah and the forensic examination revealed that Fatima’s death was caused by severe blows with a hard object on her head and body. Reportedly, the victim, Fatima, had previously filed several domestic violence complaints against her husband to Dar al-Mara’a in al-Hasakah.