An Uncertain Fate Awaits Thousands of Syrian Mercenaries in Libya

This report provides details on how members of the Syrian Free Police obtained Libyan nationality, Ankara's efforts to entice defected Syrians to Libya, and the continued transfer of mercenaries to Libya between May and late 2020 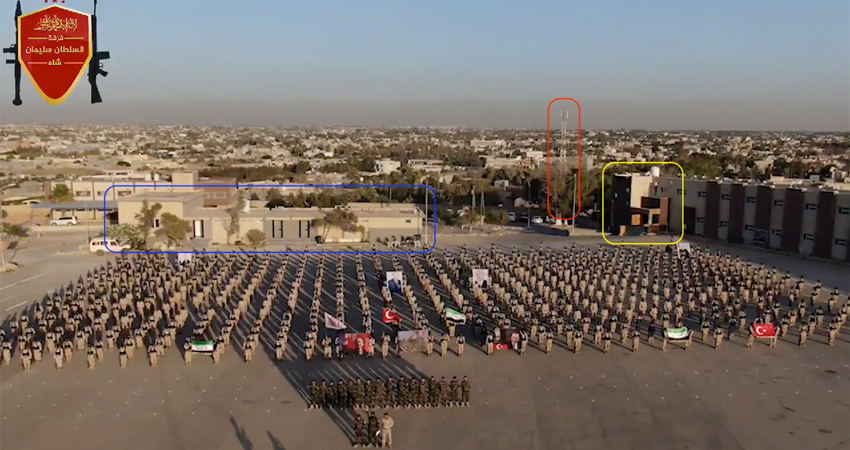 A screenshot from a video published on 27 July 2020 showing fighters from the Suleiman Shah Brigade (also known as al-Amshat) in a training camp near the military port of Sidi Bilal, west of Tripoli. Initially, it was suggested that this video was filmed in the town of Shaykh Al Hadid in Afrin, Syria.

The present report addresses the phenomenon of recruiting Syrians from areas controlled by Turkey and the Syrian opposition to fight in Libya as mercenaries alongside the Government of National Accord (GNA) and its prime minister Fayez al-Sarraj, against General Haftar’s Libyan National Army (LNA). This kind of recruitment has become more prominent since April 2020 through to the end of the year.

The recruitment targeted fighters of the opposition’s Syrian National Army (SNA) as well as members of the Free Police and the Security Forces, groups which Turkey recently established in its areas of influence in Syria. Many fighters have arrived in Libya with their families and acquired Libyan nationality, promised that they would be highly paid. In Libya, alongside their main duties, Syrian fighters were assigned to train Libyan Civil Police and Security Forces .

Moreover, at least 130 women have been deployed to Libya to undertake such tasks as the provision of training for women cadres in the civil police cadres as well as nursing and medical services to Syrian fighters there.

STJ field researchers observed how SNA groups have recently tended to send their fighters to Libya by force, contrary to their previous method of attracting fighters with money and privileges. In this report we cite many cases of fighters who were forced to go to Libya under threat of being discharged from the SNA if they refused to do so – a penalty which was indeed  on some fighters.

This report also sheds light on the suffering that has been inflicted on fighters’ families who remained in Syria to anxiously wait in the dark for news of their fate, adding to the burdens of the women in these families.

We also reveal information on the arrest of at least 180 fighters by the Libyan National Army (LNA) led by Haftar. 28 of them, however, have been recently handed over to the Syrian government, and STJ managed to meet relatives of some of those fighters. Our report contains information about the several prisoner exchanges conducted between the governments of al-Sarraj and Haftar.

Since December 2019, reports began to circulate about the transfer of thousands of fighters from the Turkish-backed SNA to Libya to fight alongside the GNA. Although these reports were categorically denied by both sides – the SNA and the GNA – the news was quickly verified by circulating photos and videos of Syrians fighting in Libya, the transfer of bodies of those who were killed there to Syria, and dozens of other pieces of evidence.

As part of the scope of its work, STJ has tracked the news of Syrian mercenaries being deployed to Libya from the very beginning. It published its first report on this subject on 24 January 2020, confirming that Haftar’s LNA had arrested a Syrian fighter affiliated with the Suleiman Shah Brigade (also known as al-Amshat) of the SNA.[1] STJ followed this on 11 May 2020 with  an expanded report on the mechanisms for recruiting Syrian fighters (including children) for combat in Libya. Furthermore, the report detailed the ways that fighters had been transferred through civilian/commercial aviation services from Syria to Libya via Turkey.[2] This report was mentioned in the memorandum submitted by the UN Secretary General to the General Assembly, as well as in the report entitled: ‘Use of mercenaries as a means of violating human rights and impeding the exercise of the right of peoples to self-determination’.[3]

Since documenting violations by all parties is one of STJ’s strategies, we published another expanded report on 28 June 2020. This revealed information about collusion between the Syrian government and a Russian security company to send thousands of Syrian mercenaries to Libya to fight alongside Haftar’s LNA.[4]

For this report, STJ interviewed 22 witnesses and sources, among them fighters in the SNA and members of the Free Police,[5] in addition to two women who had been recruited recently, relatives of Syrian fighters in Libya, and two Libyan military officers.

This report was prepared between April 2020 and January 2021. The interviews contained herein were conducted in person or online through secure encrypted messaging applications; some of those interviewed provided us with exclusive photos of Syrian mercenaries in Libya.

It is worth mentioning that the transfer of mercenaries continued to take place after a permanent agreement to a ceasefire in Libya had been signed on 23 October 2020. The agreement gave parties to the conflict a deadline to remove mercenaries and foreign forces from Libya,  but the deadline passed without any action from Turkey.

Contrary to expectations, the deployment of Syrian mercenaries to Libya to fight alongside the Turkish-backed forces of al-Sarraj against those of Russian-backed Haftar has expanded. Since April 2020, STJ has documented several transfers of SNA fighters as well as members of the Free Police and Security Forces – established by Turkey in its areas of influence in Syria – and their families to Libya. In return for enlisting, many of those fighters were granted Libyan nationality and promised to be well paid. Alongside their main duties, Syrian fighters in Libya were assigned to train Libyan Civil Police and Security Forces.

Moreover, STJ field researchers have recently witnessed numerous cases of the SNA forcibly recruiting fighters, whereas it used to use incentives to induce fighters to go to Libya. Some groups have even punished those who refused to enlist, up to the point of discharging them from the unit.

A SNA source revealed that no fewer than 180 of its fighters are being held captive by Haftar’s LNA. 28 of them, however, have been handed over to the Syrian government recently, in the context of prisoner exchanges between al-Sarraj and Haftar that mostly included first-line officers of the SNA.

[3] Seventy-fifth session Item 71 of the provisional agenda, right of peoples to self-determination, Use of mercenaries as a means of violating human rights and impeding the exercise of the right of peoples to self-determination, note by the Secretary-General to the General Assembly, 28 July 2020, https://undocs.org/en/A/75/259 (last visited: 25 January 2021).

[4] “In Collusion with the Syrian Government, a Russian Security Company Recruits Thousands of Syrians as Mercenaries to Fight in Libya alongside Haftar”, STJ, 28 June 2020, https://stj-sy.org/en/in-collusion-with-the-syrian-government-a-russian-security-company-recruits-thousands-of-syrians-as-mercenaries-to-fight-in-libya-alongside-haftar/ (last visited: 25 January 2021).

[5] The Free Police/Police Force or the National Security Force was established in Afrin in May 2018. Its members underwent training inside Turkish territory and assumed their tasks in Afrin on 27 May 2017. It launched its official Facebook account on 4 June 2018.

Hundreds of Syrians Deployed to Libya Despite the Ceasefire Agreement - Syrians for Truth and Justice July 16, 2021 - 4:41 am

[…] previous reports which call to attention the suffering of locals under mercenarism. Previously, STJ cited the stories of two women whose lives changed irrevocably after their husbands were sent to Libya. […]