Child Labor Rises Sharply in Hama, Restrained by Neither Censorship nor Accountability

The new Labour Low, which decriminalizes child labour, of those aged above 15 and under 18 years old, is a violation of the Convention on the Rights of the Child and its optional protocols, which Syria ratified in 1933 and 2003

Based in the city of Hama, central Syria, a large segment of children, under 15, are coerced into various professions and fields of work, becoming vulnerable to exploitation and danger, while censorship and accountability seem to be lacking on the part of the local authorities, ruling the city with laws that criminalize child labour only when the concerned are under the age of 15, but not those under 18, in a violation of the Convention on the Rights of the Child, ratified by Syria in 1993, and the two optional protocols, ratified in 2003. [1]

Between the 12th and 19th of November, 2018, the field researcher of Syrians for Truth and Justice/STJ interviewed a number of children, who narrated their work conditions and the risks they are put to.

“Nour”, a 9-year-old girl, displaced from rural Hama and living with her mother and step-father, told STJ’s field researcher the following:

“My step-father beats me and forces me to work. I sell chewing gum on the streets, between cars and at traffic lights. In the evening, when I am back at home, I give the money to my step-father, who goes and buys cigarettes.” 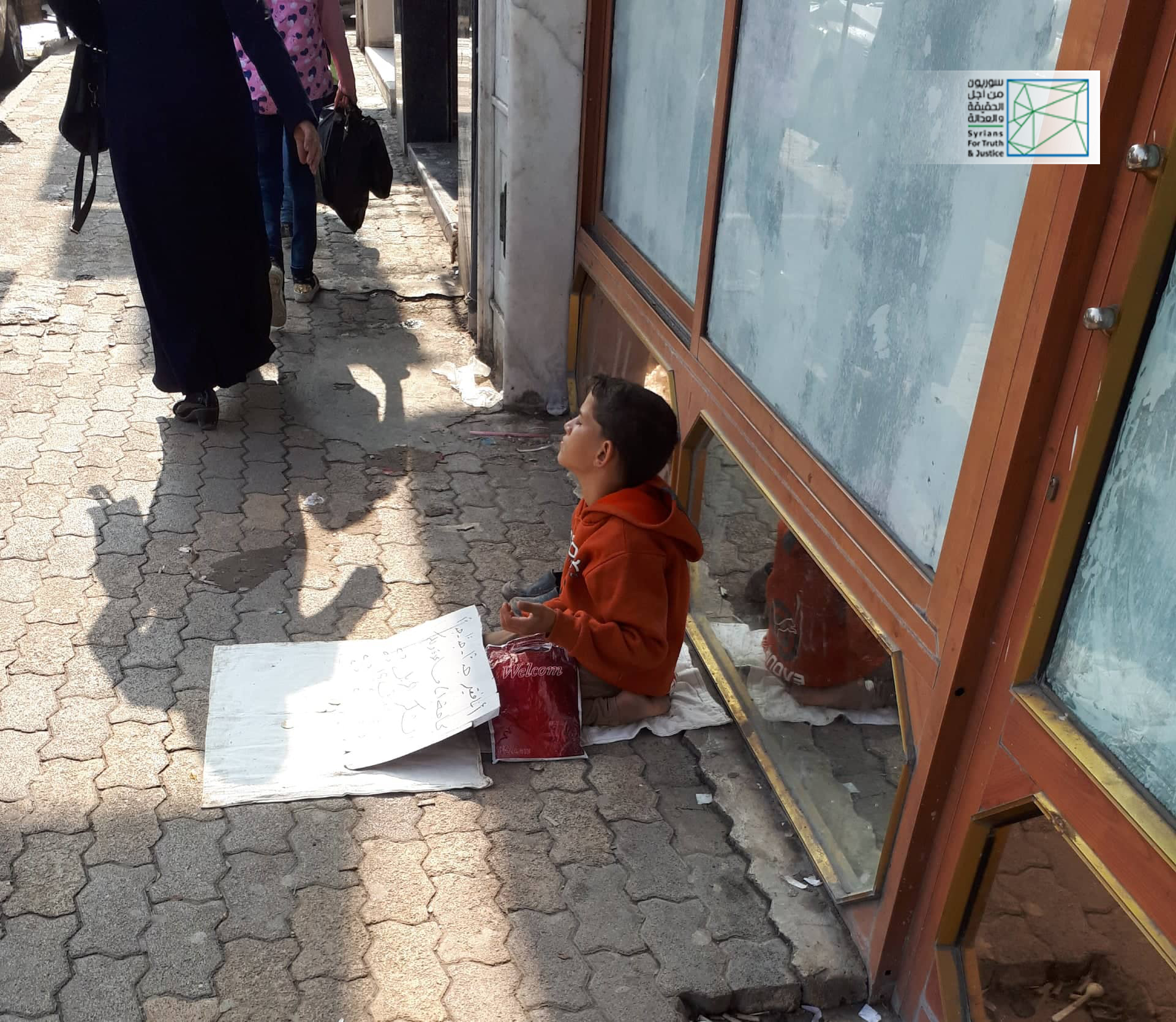 A child beggar in the al-Murabit neighborhood, the city of Hama. Taken in: November 2018. Photo credit: STJ.

“My father and mother died in one of the shelling raids that targeted the city of Talbiseh, and I was injured in the bombardment. Today, I live with a family who are not relatives of mine. In return for taking me in, I beg here, as I am incapable of work due to my injury. On the placard, in front of me, I wrote: ‘very poor, help me.’ When I go back home, at night, I give the money I collected to the family’s man.”

“Ahmad”, a 10-year-old boy with a disability, is brought by his mother to a specific location in Ibn Rushd market, Hama city, where he stays and begs for money. She, however, does housekeeping. He said:

“Five years ago, my father died in detention. My mother is a housekeeper. Every day, she brings me here to collect money from passersby. I have three little siblings who stay at home all day. When I do not join my mother to the market, where I beg for money, we do not have food.”

“Muneer”, a 13-year-old boy, collects junks from trash containers in the city of Hama, told STJ’s researcher the following:

“My dad forced my brothers and me to collect junks and search the trash containers for anything that can be sold. Each of us is forced to work as to obtain 2000 Syrian pounds a day. When we fail to get the entire demanded sum, my dad kicks us out of home, and we sleep in the park. Most of the time, I spend the night at the public park because I did not collect all the money. My dad has a taxi, but still he forces us to work.” 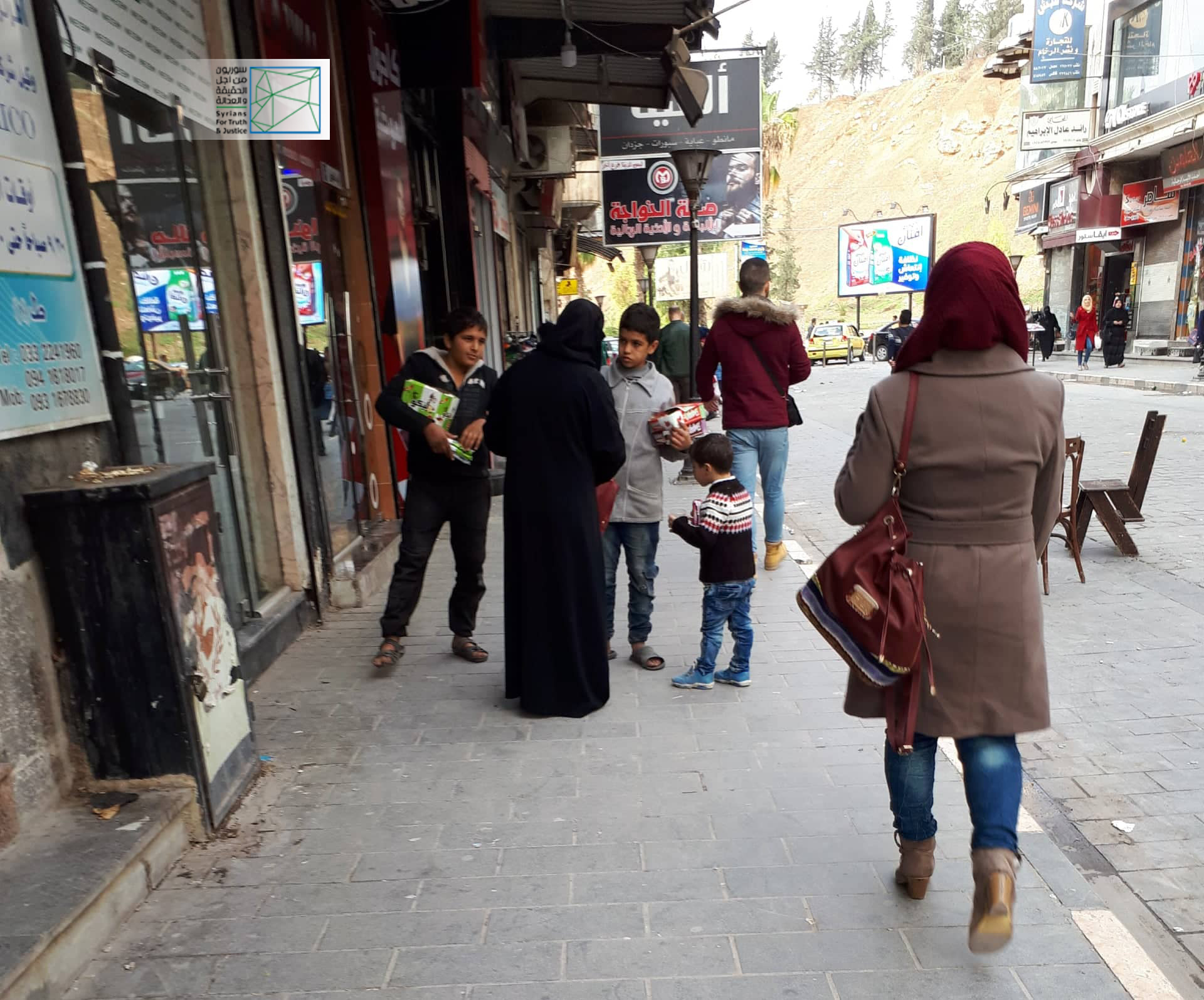 “Samar” is a little girl, whose father died while detained by the Syrian authorities, when she was two years old only. Her mother remarried and abandoned her to be raised by her grandmother. Upon the latter’s death, she moved into her uncle's house. She told STJ’s researcher the following:

“My uncle’s wife beats me, and I get punished if I refuse to go on the street to sell biscuits, in the company of my other three siblings. We never went to school and are forced to work. If my dad was still alive, none of this would have happened.”

According to STJ’s field researcher in the city of Hama, thousands of children have been recorded as school dropouts, while neither the local authorities nor the schools themselves are stepping in to get back children into school or prevent their parents from forcing them into the labour market, especially those at the age of compulsory education.

Concerning the phenomenon of beggary and its proliferation, STJ’s field researcher said that the Social Care Association has established a care center for sheltering child beggars, but this failed to deter the phenomenon, for children have actually started to beg for money near the center itself.

The new Labour Law, No. 17, passed in 2012, provided for the articles that regulate and define the labour of juvenile children. Nonetheless, the penalties imposed on the law’s offenders are not deterrent. It is worth mentioning that the Syrian law defines 18 as the age of majority; accordingly, the new Law on Labour is a violation of the convention which Syria ratified, and since ratifying a convention is bending for the state concerned, it is necessary to amend the laws which oppose to the convention’s letter.[2]

On June 13, 1993, the Syrian government ratified the Convention on the Rights of the Child under Law No.8, the Convention entered into force in August 14, 1993. But Syria still has a reservation on Articles 20 and 21, relating to adoption, and Article No. 14, having to do with the right of the child to freedom of thought, conscience and religion. It also ratified the two optional protocols, annexed to the Convention on the Rights of the Child, relating to children trafficking and getting them involved in prostitution, pornography and armed conflict, according to Decree No. 379 on October 26, 2002.

[1] For further information on the Convention on the Rights of the Child: UNICEF, last visit: February 10, 2019. https://www.ohchr.org/documents/professionalinterest/crc.pdf.