Appeals to Save Tens of Thousands Civilians in Wadi Barada villages, Fear of “Water Catastrophe”

In a statement received by  Syrians for Truth and Justice, civilian organizations spoke about the events in Wadi Barada, located in the countryside of Damascus, and appealed to the international community as well as national governments to assumer their responsibilities to spare civilians in the region from a potential water catastrophe as well as to intervene in saving the remains of the ‘Ein-al-Fejeh’ water facility which provides millions of Syrians with drinking water. These appeals occurred in the wake of Syrian regime forces resuming military operations, including indiscriminate bombardments, only a few days after the evacuation of tens of thousands of people from eastern Aleppo.

Wadi Barada is one of the well-known valleys in Syria. The region contains thirteen villages. Ten of them are held by the armed opposition factions; they are: Bassemah, Ein-al-Fejeh, Daer Mkaren, Kfaer Azzeat, Daer Kanon, Alhuseineah, Kafar Alwameed, Brhilia village, Souk Wadi Barada, Efreh. The other three villages are held by the regime forces; they are Jadidat Wadi Barada, Ashrafiat Wadi Barada, Huraira. The valley also contains the Ein-al-Fejeh spring that supplies Damascus and its outskirts with drinking water. The spring is considered to be the lifeblood of Damascus.

Activists estimate the number of civilians living currently in Wadi Barada to be between 90,000 to 100,000. These numbers include thousands of internally displaced individuals from Huraira and Efreh.

Map of the towns and villages of Wadi Barada, located in the countryside of Damascus.

In August 2015, the Wadi Barada territory was exposed to similar attacks to those occurring currently when the regime forces tried to capture region in 2012. While they failed in this attempt, the regime forces signed a truce with armed opposition factions. The most significant part of the truce, according to activists, was allowing Damascus access to Ein-al-Fejeh water in exchange for allowing the entry of food to Wadi Barada, in addition to the general “safety of Wadi Barada”.

Neser Ashamy, a member of the “Medical Committee” in Wadi Barada told Syrians for Truth and Justice that at the beginning of the revolution, many young men in addition to protecting their village from disorder had specifically also protected the Ein-al-Fejeh spring out of fear that regime forces or vandals might tamper with the water. However, on February 1st, 2012, the regime forces initiated a ground offensive from Jadidat, a Wadi Barada village. This military offensive led to an agreement between the regime forces and armed opposition forces that exchanged water security to the capital Damascus versus the safety of Wadi. The truce lasted till mid-December 2016.

New attempts by the Syrian Regular army to capture Wadi began after failed negotiations between armed opposition factions and the regular forces, which had occurred under the management of a high ranking officer who comes from Wadi. The negotiations failed when regime forces insisted that the opposition surrender Wadi as well as remove and deport civilian fighters and their families to Idlib province in the North of Syria. This call for “removal” was seen by both activists and residents as repeating previous regime actions in other regions, such as al-Zabadani, Daria, al-Waer, and Aleppo. These previous “removals” were understood by Wadi Barada residents as an attempt to make demographic changes on sectarian basis as a part of “Damascus Belt” plan supported by the regime. According to activists in Wadi, these most recent attacks began with residents being targeted by snipers as well as discriminate and indiscriminate gunfire from heavy artillery for two days, followed by a campaign of intensive barrel bombs.

This is confirmed by Ahmad Barada, 38, a volunteer in the Syrian Civil Defense, who stated to Syrians for Truth and Justice:

A few days ago, the regime tried to control the Wadi, sent letters with mediators by tenors of willing to completely control the spring area. A high-ranking officer in the Syrian regular army, who comes from the Wadi, did go to negotiate with the regime forces which denied all proposals and insisted to evacuate the region of armed factions and sending them with their families towards the north of Syria (Idlib). Armed opposition factions deployed in the region along with the people rejected it. On December 19 and 20 the regime forces started to snip the residents accompanied by indiscriminate gunfire, and then struck the towns and villages very severely.

Specifically, on December 22, an intensive bombardment campaign began that utilized warplanes as well as included barrel bombs, ground-to-ground rockets, and “Phil rockets” launched from military units affiliated to the Republican Guards stationed in the mountains surrounding and directly overlooking the Wadi. For example, according to activists from inside the region, after five airstrikes, the village of Bassemah was struck with barrel bombs. Similar operations also targeted other parts of the Wadi, such as the Ein-al-Fejeh spring facility and Kfaer Azzeat villages among others.  In response, also on December 22nd,  the “Media Committee” in Wadi Barada posted video footage showing some houses which were burning due to what activists said were incendiary weapons. The day ended with pounding towns and villages of the Wadi by tens of barrel bombs.

The fiercest day of the campaign was Friday 23, December when, from daybreak, towns and villages in the Wadi were targeted by tens of barrel bombs. The Syrian Civil Defense declared that up to 66 barrel bombs, some having incendiary devices, were dropped on civilian houses. This is in addition to 14 airstrikes, as well as numerous ground-to-ground rockets and Phil rockets. The bombardment killed and injured dozens. A partial list of victims includes: Waseem Sawan from Bassemah; Othmanah Hussein Alia from Daer Kanon; Hussein Gharibeh from Kfaer Azzeat.

According to activists, mass destruction concentrated in Daer Mkaren where the Percentage of destruction reached (15%) by Phil rocket shelling, in Ein-al-Fejeh (40%) besides getting the spring facility out of service, in Bassemah (65%) due to indiscriminate bombardment and clashes in the village and in Kfaer Azzeat the percentage was (5%). A ground campaign by the Syrian regular army accompanied the aircraft bombardment but could not storm from Bassemah axis soattempted intrusions from other axes like (Daer Kanon and Alhuseineah) backed by the Lebanese Hezbollah forces, the bombardment affected Alhuseineah mosque, killed a whole family and injured eight civilians, Syrians for Truth and Justice said.  )

Speaking about the regime’s continued bombardment and general tactics in Wadi, Barada stated:

The casualties as of Monday 26, December 2016 amounted to more than 19 deaths and more than 50 wounded, some in serious condition. At first, the military headquarters of armed opposition factions were targeted, but later dozens of other airstrikes and bombing operations targeted vital facilities, civilian areas, and infrastructures, or indiscriminately targeted towns and villages in the Wadi. The villages experienced a full siege after the regime forces cut off roads leading to the Wadi. It is noteworthy that Ein-al-Fejeh facility is completely out of service due to shelling by the regime, which caused a great damage to turbines.

In speaking about this most recent military assault on Wadi, in general, and its impact on Ein-al-Fejeh, in particular, Ashamy stated:

The last campaign before this synchronized with that over at al-Zabadani in 2015. There was again a similar agreement to halt bombing versus access to water which opposition forces had cut following assaults by the regime forces and militias fighting with them; the regime response was very severe at the time. The regime violations against residential complex increased in the past few months. On Thursday 22, December 2016, we got surprised by the heavy war shelling on Bassemah village that destroyed many houses and a mosque. The next day on December 23, 2016, the regime struck with a fierce campaign on the Wadi. The events of the ongoing recent campaign is summed up in shelling the western part of Ein-al-Fejeh village on Friday December 23, 2016, when it targeted Ein-al-Fejeh spring foundation facility with more than 5) barrel bombs. Thus, it went out of service. It also targeted the Medical Staff and caused a great destruction to the village”.

According to activists, the casualities from Ein-al-Fejeh, which include individuals who were protecting al-Fejeh spring as well as those killed in the first attacks in the spring include: Mhamad Daher Ataya; Hassan Hassan Ataya; Walid Khalid Aref al-Houri; Ahmad Fawzi Rahima.

As Ashamy reports, barrel bombs fell on Ein-al-Fejeh foundation facility which caused a significant part of it to be out of service. The damage also caused the drinking water to be contaminated with the fuel leaking from the facility’s pumps as well as with chlorine that mixed with the drinking water going to Damascus. There was also concern that the main spring basin might be polluted given the damage done by the fierce bombing campaign to the layers of earth surrounding the spring. Video footage posted on December 14, 2016 by activists in the Wadi shows the aftermath and material damage caused to several parts of Ein-al-Fejeh village.

As a result of this most recent military campaing, activists have concerns about the water supply being contaminated because of the leaked chlorine, fuel, and oil from the pumps mixing with the water being supplied to Damascus. They believe the tens of thousands of civilians living within the Wadi villages are at risk and that there is a significant possibility of a water catastrophe in Syria.

Shelling operations and clashes are still ongoing up to the moment of this report’s production. According to activists speaking to “Syrians for Truth and Justice” if the bombardment continues, beyond the significant damage to the village’s infrastructure, civilian massacres will also occur.

Image of the aftermath of bombing by regime forces of Ein-al-Fejeh Square in the Wadi dated December 25th, 2016.
Photo Credit: The Syrian Civil Defense

Shelling on Ein-al-Fejeh area in the recent campaign, Photo credit: The Media Committee in Wadi Barada 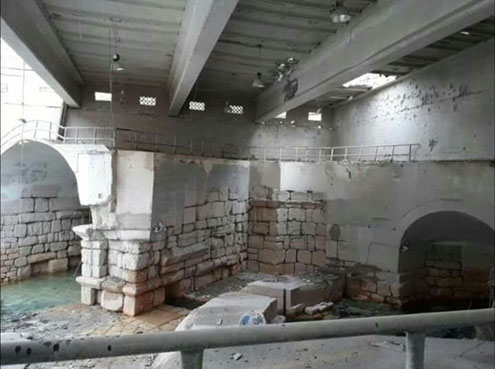 Images illustrating the damage caused to Ein-al-Fejeh facility as a result of bombing by  regime forces.
Photo Credit: Syrians for Truth and Justice