As Suwayda: A violent Incident Ends a Sit-in Demanding the Return of Abductees

The abductees’ families on the sixth day of the open-ended sit-in they had launched in front of the provincial building Published by: Tulib to Support Woman and Kid Organization, on October 8, 2018.

Sheikh al-Karama Forces[1], a local armed group in As Suwayda, attacked a sit-in demanding the release of the abductees by ISIL, held near the provincial building which they fired and

threatened to raid, they also assaulted a police officer and some of the protesters.

Salam Azzam, alias, an activist who witnessed the incident testified to STJ on October 8, 2018:

"At 12:00pm, fighters of Sheikh al-Karama Forces stepped out of four vehicles stopped at the provincial building where they assaulted the police officer standing at the entrance with threats to seize the building and expel all the employees in it, because of being affiliated to the Syrian government which they accused of being involved in the kidnappings. That triggered a dispute between the protests and the fighters, which ended in the latter’s shooting on the building, threatening to raid it the next day. After they left, the fighters cut the highway to the city.”

Following the incident, the sheikh Abdul Wahab Abu Fakhr, representative of the Akl sheikh Hikmat al-Hajri, the liaison between the families of the kidnapped and the negotiation committee, headed to the sit-in square and asked the protestors to end the sit-in, promising to keep them informed with any updates on the abductees’ issue. The protesters responded to his request and clear the square in which the law enforcement officers and agents of the Syrian Air Force Intelligence Branch were then deployed.
Azzam said:

"Against the background of Sheikh al-Karama Forces’ threat, pro-government militias, including the Bath Battalions, the National Defense, and Kata'ib Hummat al-Diyar, cut all the roads to the city center in the morning of Oct. 9, 2018, and deployed soldiers around the provincial building and the police command as well as snipers on all the governmental buildings in the city center, in addition to installing sand berms around them."

Families of the kidnapped posted on the Facebook page, they have created to publish the updates of the case, a statement condemning the shooting incident, stating that they will suspended their sit-in for 48 hours. 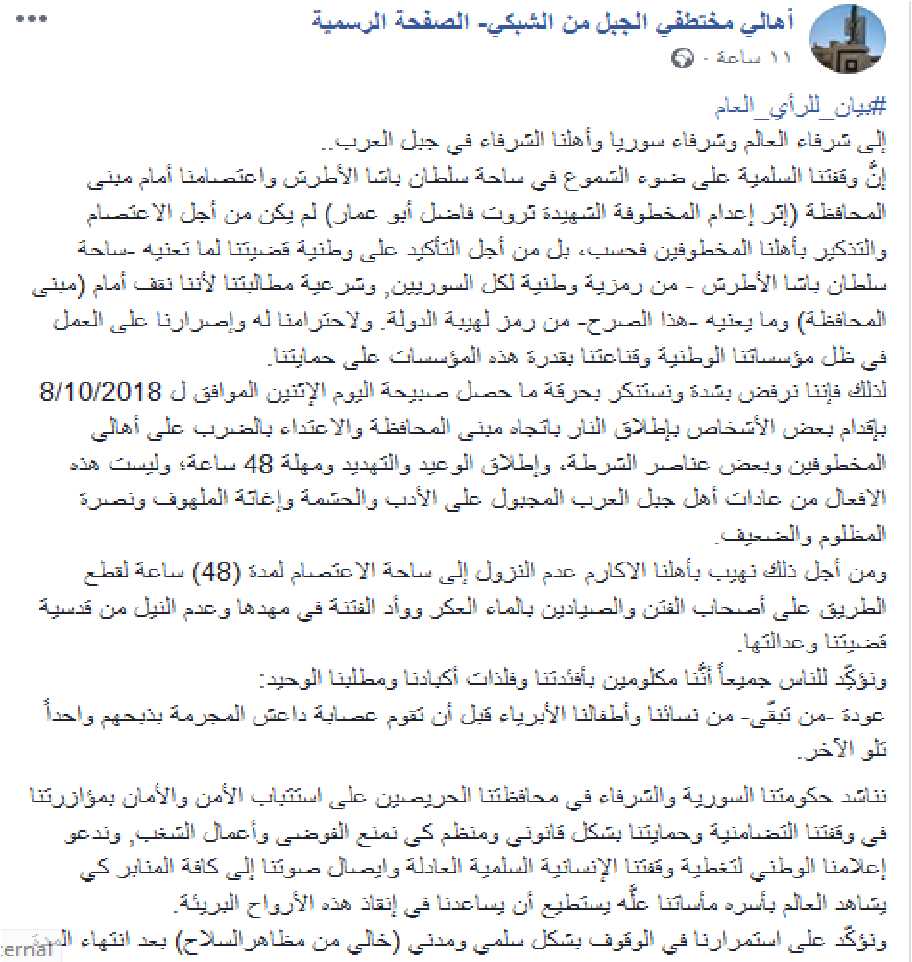 The abductees’ detention conditions have worsened recently, as 3 deaths were reported during Aug. 2018; on the 5th ISIL beheaded Mohanad Thoqan, and on the 9th Zahya al-Jiba'ei died of health problems while on the 12th a fetus died in a preterm birth.

[1] According to local sources, the Sheikh al-Karama Forces is an independent armed group split from Rijal al-Karama movement six months ago.