Syrian Rebels Accused of Attacks Against Civilians in Mahardah

Smoke rising as a result of an air raid on al-Lataminah village, Sep. 8, 2018. Photo credit: STJ

Concurrently, on Sep. 7, 2018, the Syrian regime-held Mahardah city, in western Hama countryside, was attacked with cluster munitions, which resulted in the kill of 9 civilians and the injury of others. Websites loyal to the Syrian government point the fingers at the opposition groups.

The military escalation by the Syrian regular forces was simultaneous with the trilateral summit[2] between Russia, Turkey and Iran held in Tehran on Sep. 7, 2018, to update the Syrian file.

In retaliation, the armed groups launched airstrikes on regime positions in the cities of al-Seqelbiya, Salhab, Mahardah, and Safsafiya in Hama western countryside.

Earlier, eight schools in Hama and Idlib had been targeted by Syrian regular forces and their allies during the first week of Sep 2018, which also resulted in civilian injuries, including pupils, and schools’ destruction.[4]

"We have agreed on the establishment of a weapons-free zone between the opposition- and [Assad] regime-controlled areas," Turkish President Recep Tayyip Erdogan said in a news conference with his Russian counterpart Vladimir Putin in the city of Sochi, following a meeting between the two leaders.[5]

On Sep. 7, 8, and 9 Syrian regular forces and Russia conducted some 200 airstrikes on al-Lataminah, Kafr Zita, al-Zakat, al-Sayyad, and Maarkaba among others.

Qalaat al-Madiq, in the west countryside of Hama, was targeted with hundreds of artillery and rocket shells from the Syrian regular forces stationed in al-Nakhl Checkpoint, located in al-Seqelbiyah, and from checkpoints in Hayaleen, Qabr Fidda and Shathah, and Joreen Camp in Sahl al-Ghab area.

"The three-day intensive strikes left many civilian causalities, significant destruction in residential buildings and led to mass exodus toward the camps on the Syrian-Turkish border, mostly from Qalaat al-Madiq. Kafr Zita, Qalaat al-Madiq, Shahshbo Mount and al-Jabriya villages were declared disaster areas by the local council of each", as reported by Abu al-Joud, a local activist in Hama countryside. 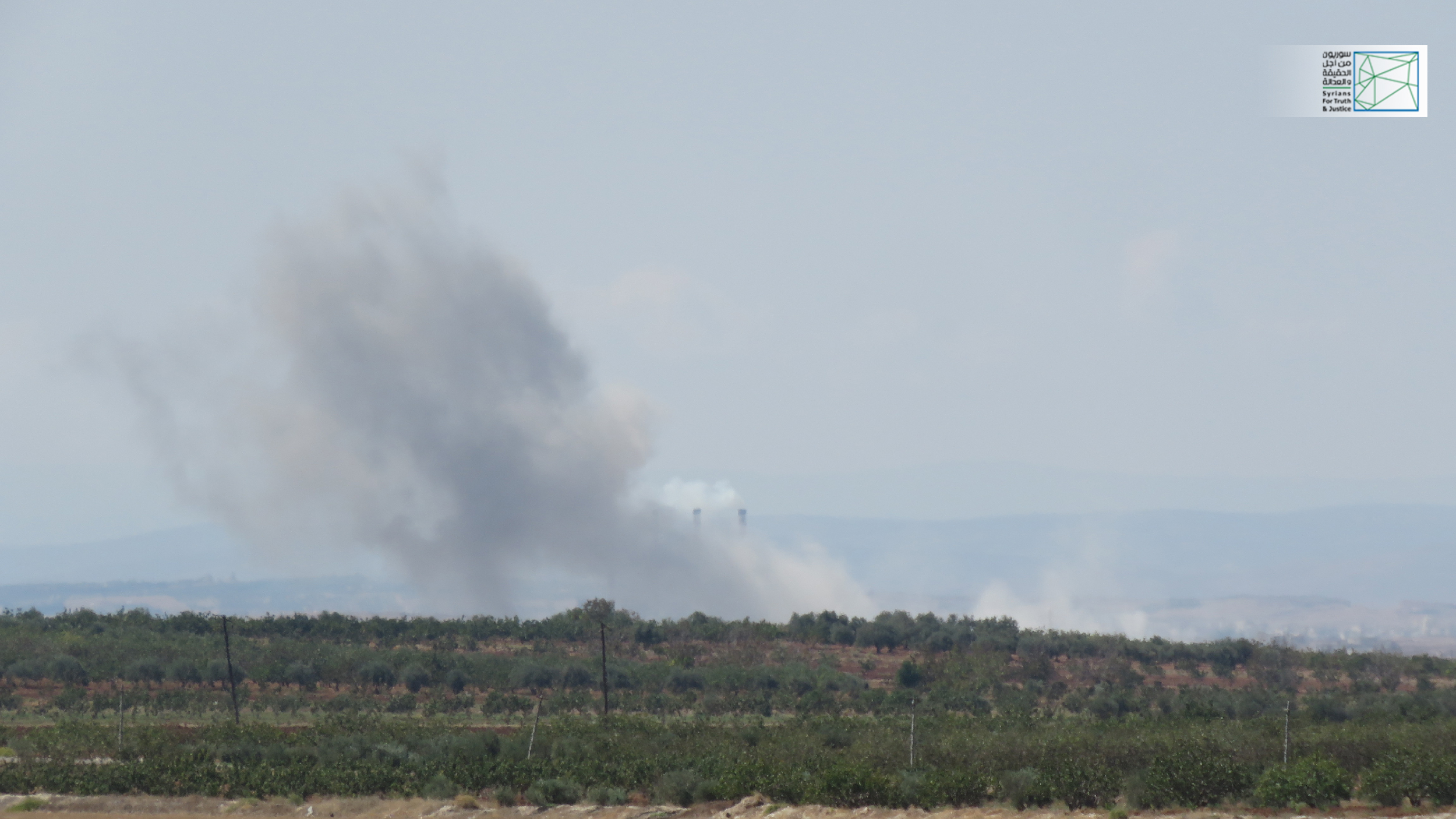 Regarding the bad security conditions and the material loses, under the continued bombardment by Regime forces, Ahmad Nayrozi, the director of the Syrian Civil Defense in the western countryside of Hama, reported:

"The Russian-backed regular forces launched violent attacks on Sep.7, 8, and 9 on Hama countryside, causing many civilian casualties and mass destruction in their properties and buildings. All our vehicles and volunteers are 100 per cent level of readiness to save civilians' lives. Qalaat al-Madiq town was the most bombed, as it was targeted with more than 800 artillery and rocket shells, triggering a huge exodus. It was really dangerous for the Civil Defense teams to work there, as on Sep. 8, the fire fighters team was targeted by the regime forces stationed in al-Seqelbiya, while extinguishing fires, which resulted in the injury of a volunteer and the damage of two vehicles, so we were compelled to leave the town."

Activists circulated a footage showing the strikes against al-Lataminah on Sep. 9, 2018. 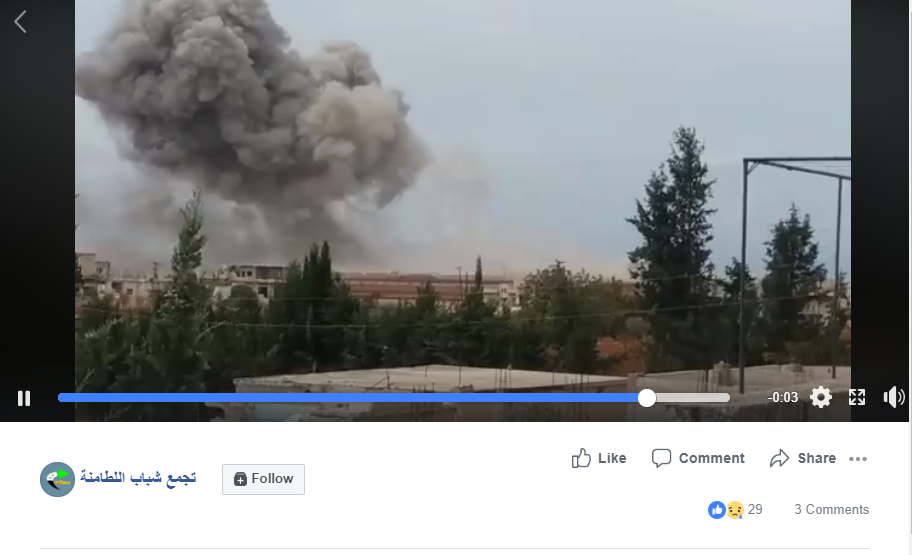 A still taken from the previous footage showing an air raid on al-Lataminah on Sep. 9. 2018.

Faisal Hamdah, a relative of a victim, who was killed in Kafr Zita, narrated the account of his cousin,

"Aref Mohammed Hamada, born in 1994, lived a destitute life and so could not complete his education. He struggled with his father to make ends meet; he worked as a mechanic and electrician. Despite the bad security conditions and the continuous bombardment, Aref refused to displace. He had no military affiliation. As recently as 2017, he got married and almost a month before his death, he had a baby who also died of illness. On Sep. 9, 2018, while Aref and his wife were on a visit to a relative's house, a Syrian regime helicopter dropped a barrel bomb killing him and injuring the rest. His family couldn’t perform his funeral, as they evacuated along with the few remaining families, toward IDP camps in the north." 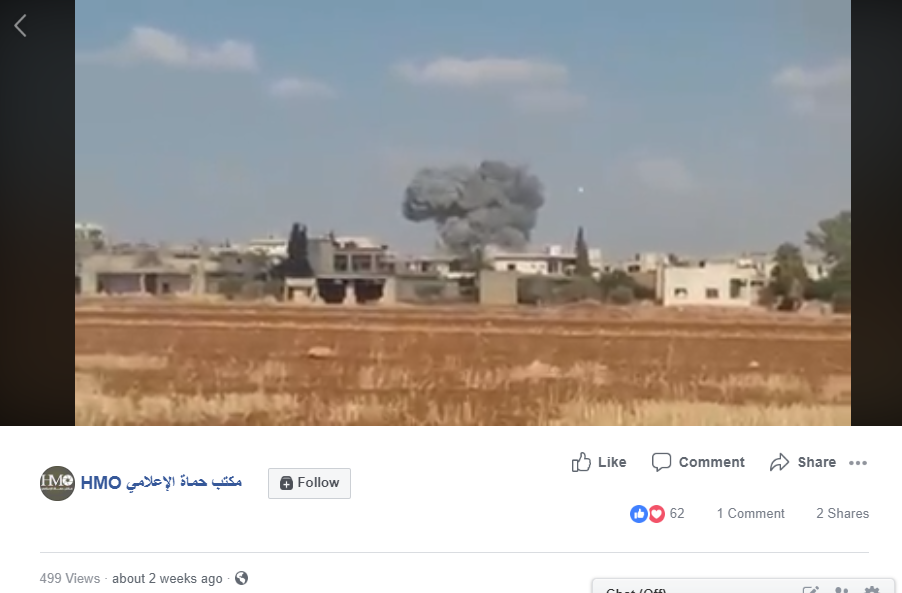 A still taken from the abovementioned footage. 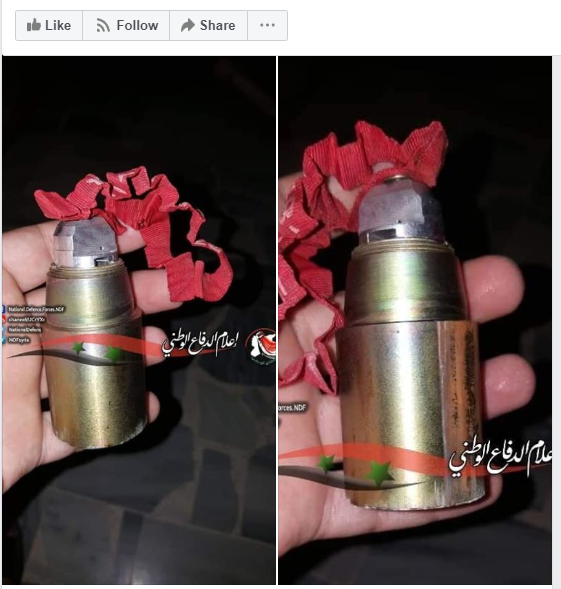 A cluster munition used by the rebels to shell Mahardah Sep. 7, 2018.
Photo credit: the National Defense in Mahardah.

Warning sirens were sounded in the city after it was hit by cluster munitions, alleged to be fired by rebels stationed in al-Lataminah. The next morning, on Sep. 8, a mass funeral was held by locals of the city and public mourning was announced; shops were closed and movement almost paralyzed, as Mahardah News Network reported. 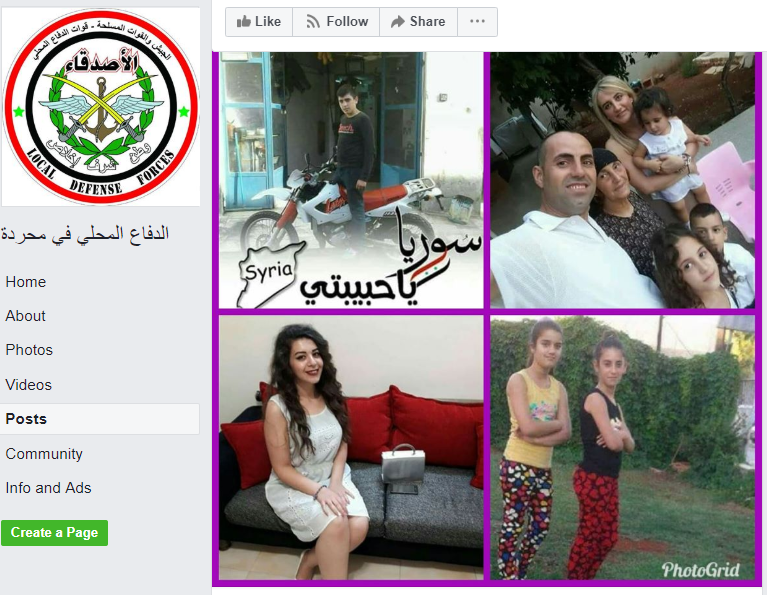 A Canadian press delegation arrived on the same date to conduct investigation on the Mahardah attacks, as Mahardah News Network reported  on Sep. 11, 2018.

Activists from Hama countryside, on the other hand, blamed the bombardment on the Regime forces, citing that rebels don’t own such types of weapons, and pointing that the Damascus Government sought to accuse opposition groups of tearing apart the social fabric.

[1] Some parts of north and west Hama countryside are controlled by armed opposition groups, most notably Jaysh al-Izza that was formed in mid-2014 and launched battles against the Syrian regime forces. Al-Lataminah is the most significant headquarter for Jaysh al-Izza, as it’s the hometown of its General Commander Jamil al-Saleh.