Arrests and Forced Recruitments by the Syrian Regime, Southern Damascus

Syrian security services arrested 30 men and recruited 200 others, in violation of the six months- settlement agreement signed in May 2018.

Syrian regular forces and security services continue to arrest and recruit young men from southern Damascus, to drag them into Idlib’s upcoming battle, in violation of the so-called "settlement/reconciliation agreement" signed between the two after the Regime forces’ full control over the entire region in May 2018.

Qais al-Shami[1], a media activist, told STJ on 11 September 2018, that the security service agents of Palestine Branch[2] at "Sidi Meqdad" checkpoint arrested some 30 youths, from all southern Damascus areas for unknown reasons, between 15 May and 10 September 2018, despite the validity of the settlement agreement they signed which provided for not being  arrested or detained for non-renewable period of six months, according to al-Shami who added that

Mohammed Hamouda and Ziad Hamouda, from Aqraba living in Babbila, were arrested at "Sidi Meqdad" checkpoint on September 8, 2018 for unknown reasons, despite signing the "settlement/reconciliation agreement" in May 2018. Mohammed al-Doumani, from Aqraba, was also arrested on 11 September 2018 at the Syrian-Lebanese border on his return from Lebanon under a "reconciliation/settlement agreement" as well.

With regard to the recruitment of southern Damascus young men, al-Shami said that some 200 youths, wanted for compulsory military service, had volunteered in the 4th Armoured Division affiliated to the Syrian regular forces, and were equipped to participate in the expected battle in Idlib. Al-Shami referred to a leaked audio clip, spread on social media, attributed to one of the 4th Division leaders talking about these recruits; "I had a talk with the Lieutenant colonel Duraid, he explained why they were allowed to join us, as he said we all know that their presence is a threat to us and the best and only way to throw him out is to put them on this battle’s front lines to be burnt, so that we could keep our regular soldiers’ lives, and the the 4th Division agents will be in behind, ready to deal with any betrayal or retreat ".

Footages from Yalda, which were filmed during August 2018 and spread lately on social media, show a number of men from southern Damascus dressed in Regime forces’ uniforms, carrying light weapons and cheering for the 4th Division, which they recently joined. They were gathered at buses and cars, which would transfer them to Idlib to take part in the battle there, as a number of men appeared in those footages said. 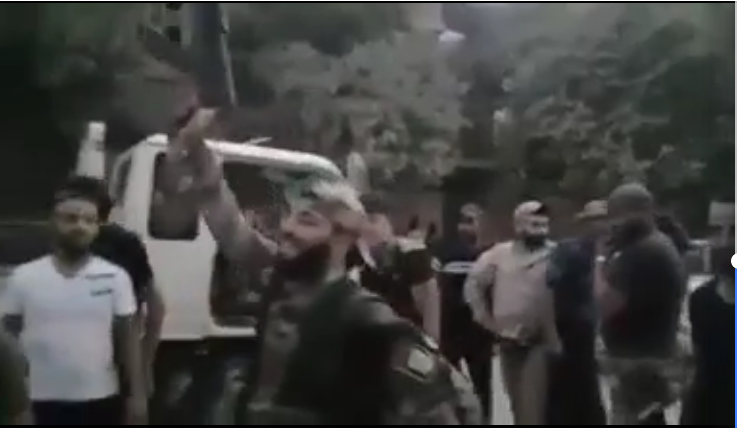 A still from a footage showing a number of young men in Yalda town after joining the 4th Division.

Pro-government forces managed to control entire southern Damascus in May 2018, after it was evacuated under several agreements provided for transferring opposition fighters along with civilians, unwilling to settle, to Idlib. While a special agreement was concluded with the Islamic State, also known as ISIL, which provided for the latter’s evacuation to As-Suwayda province.

STJ has already published detailed news about the arrests and looting carried out by Syrian regular forces in the al-Yarmouk Camp after controlling it.[3]

[1] From southern Damascus, currently living in Turkey. His information based on local sources.

[2] Also known as Branch 235, of the Department of General Intelligence in Damascus.