The blast on August 2, 2018 was near the Ministry of Justice Building and the Local Administration of the Salvation Government

On August 2, 2018, one woman was killed and 27 others were injured, including women and children, as a result of a huge explosion that shook the east neighborhood of Idlib city[1]– city center. According to several testimonies obtained by STJ, the blast was due to a car bomb parked near a residential building and the building of Ministry of Justice and Local Administration of the Salvation government that follows Hayat Tahrir al-Sham (HTS). The blast caused considerable material damage to the civilians' houses and property as well.

Until the date of writing this report August 13, 2018, the party responsible for the explosion has yet to be known. It should be noted that Idlib city is still experiencing a state of great insecurity and the military forces that control the city, presented in HTS, could not impose control and safety that become a requirement for all civilians in Idlib city although it controls every aspects of life, being civic or service, through the Local Administration of the Salvation Government, which takes Idlib as its center.

Details of the incident

At 1:00 p.m. on August 2, 2018, a huge explosion shook a residential building and the building of Ministry of Justice and the Local Administration of the Salvation Government in Idlib. Ahmad Rahhal, a media activist in Idlib confirmed this to STJ and said regarding the course of events,

"The explosion took place in front of the Central Bank located in the east neighborhood of Idlib city, specifically west of the industrial region near al-Mehrab Roundabout. The explosion was also close to the building of Ministry of Justice of the Salvation Government, and was a result of a car bomb parked on the road, and caused the death of a displaced woman from Eastern Ghouta and the injury of 25 others, including women and children who were displaced living in Idlib. Moreover, it left considerable material damage to the houses of the locals as well as to their property. We cannot decide the identity of the party that committed the explosion specially that no party claimed responsibility, but the Syrian regular forces could be the party after the explosion since HTS that controls the city has managed to arrest a cell affiliated with the Syrian regime recently." 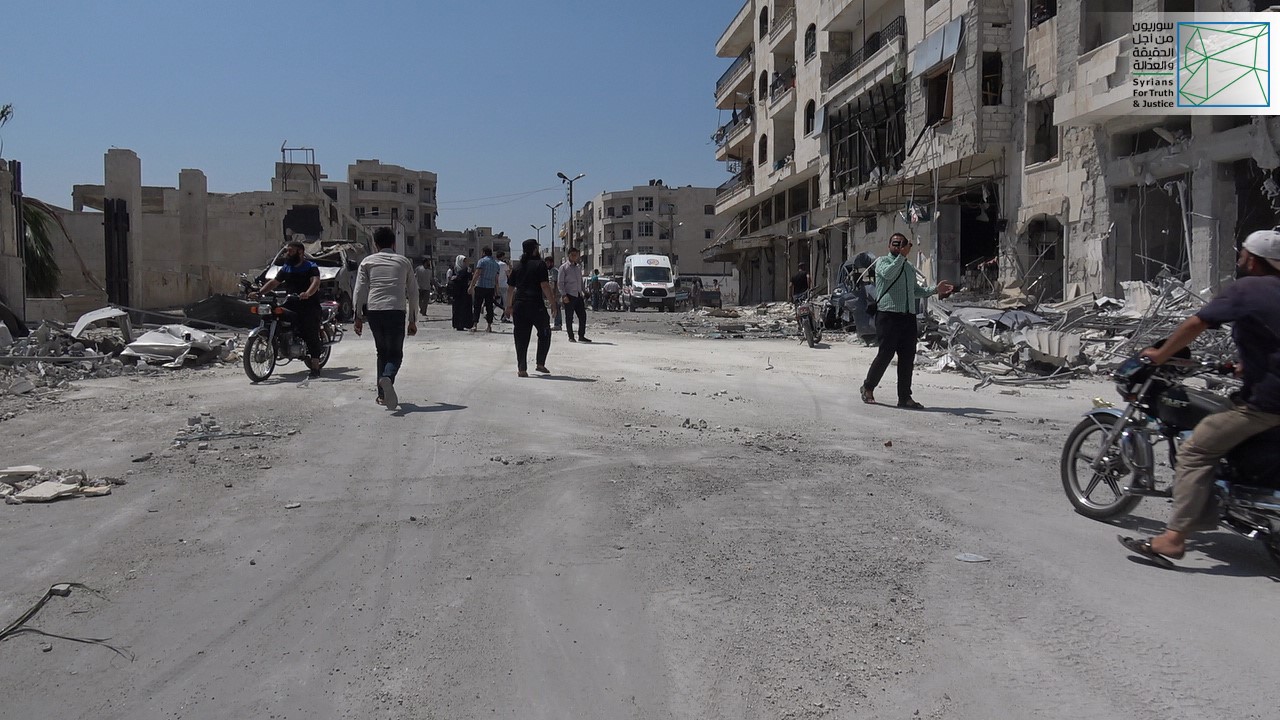 An image shows a side of the aftermath of an explosion by a car bomb in Idlib city on August 2, 2018.
Photo credit: STJ

In another testimony to STJ by the director of the Civil Defense Center in Idlib said that after checking the impact site, it was obvious that it was a car bomb had targeted a residential area near the Central Bank in Idlib. He added that it is a densely populated area with the locals along with the displaced who came from other areas.

"We immediately went to the impact site, a woman was documented killed and 27 persons were injured, including women and children, but the toll is expected to rise since some injuries were serious. In turn, we cleared the remnants of the explosion and we could open the roads only after consecutive hours of work because it is a main area." 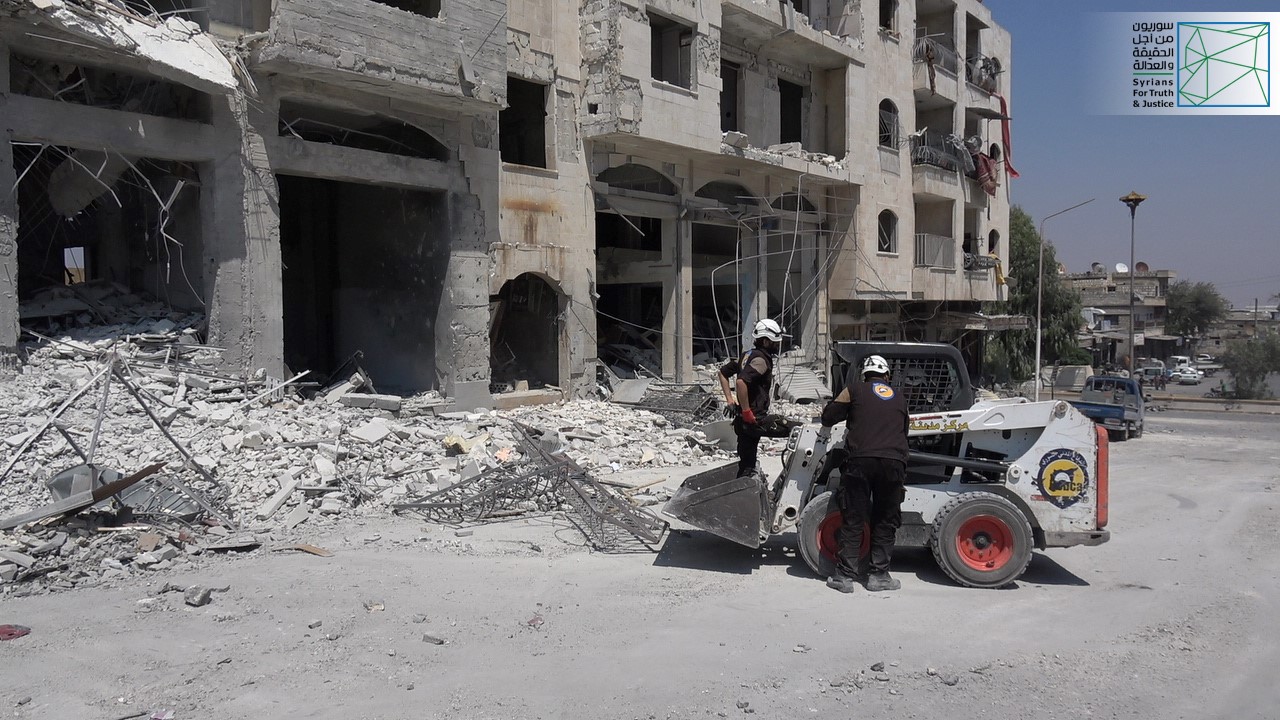 An image shows attempts by the Civil Defense team while clearing the pile caused by the explosion of a car bomb in Idlib city on August 2, 2018.
Photo credit: STJ

One of the relatives of the victim who was killed in the blast told STJ that the blast not only killed his wife's mother, but also injured his wife and kids. In this, regard he said,

"We displaced from Damascus countryside fleeing the shelling by the regular forces. but on August 2, 2018, while I was out, I learned that an explosion took place in the east neighborhood of Idlib where my family lives, so I hurried there and was shocked because of the extent of the destruction that affected my house. I also saw blood stains and I directly headed to the hospital where my mother-in-law had passed away. My wife and children had got wounds of varying degrees and the explosion had caused considerable damage to my house and it had destroyed my car that I was working on it to sustain my family." 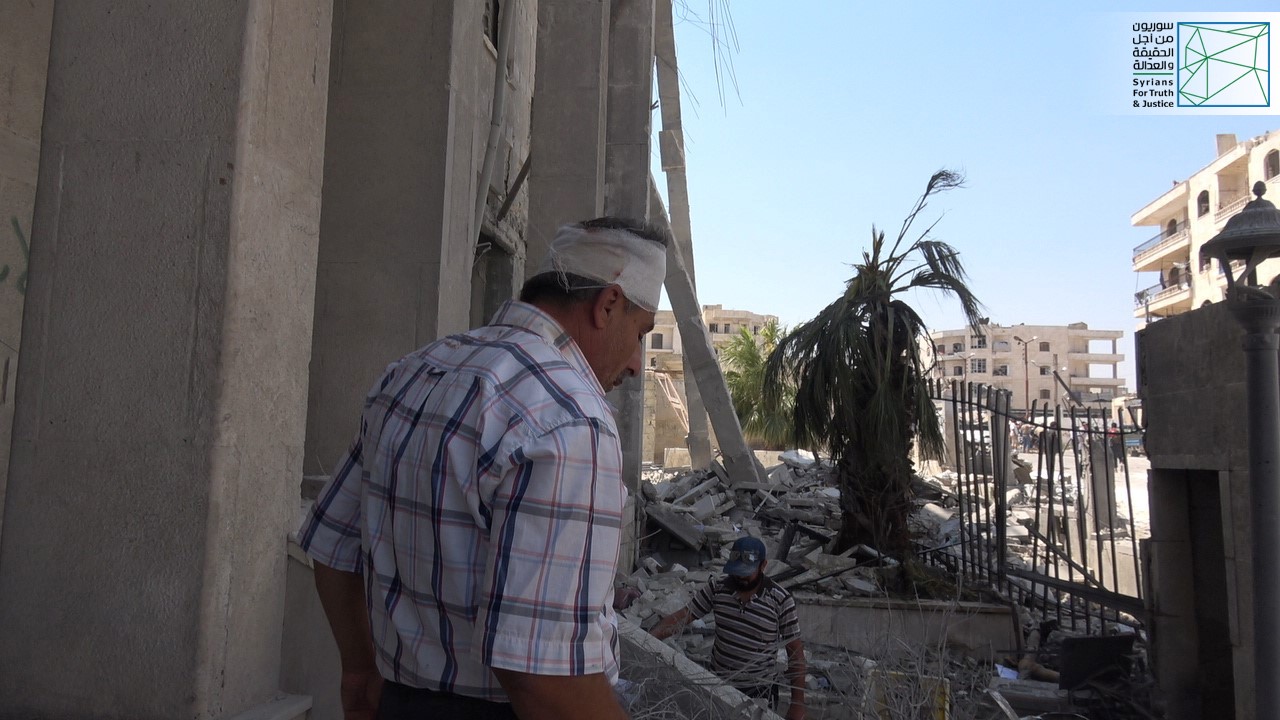 An image shows one of the locals who was wounded in the explosion that hit Idlib city on August 2, 2018.
Photo credit: STJ

STJ's field researcher could document identities of the persons killed and wounded in the explosion that hit Idlib on August 2, 2018, they are: