The Agreement Has Yet to be Complemented as the Reserve Forces (al-Quwat al-Radifa) Carried out Mass Execution Against ISIS elements on July 31, 2018

An image showing a group of captives of the Islamic State elements after they were executed by the Reserve Forces (al-Quwat al-Radifa) in Hawd al-Yarmouk/the Yarmouk Valley on July 31, 2018. Photo credit: activists from Daraa province.

Recently, the Syrian regular forces has reached a deal with the organization that calls itself the Islamic State, also known as ISIS, providing that elements of ISIS would be moved from Hawd al-Yarmouk area (basin), located in Daraa, to the east countryside of al-Sweida province in exchange for several things, notably the release of the persons kidnapped of the Druze sect by ISIS during the last military operations carried out by the Islamic State against al-Sweida[1] province on July 25, 2018. In addition the Syrian regular forces, under the deal, would be able to capture the whole Daraa province with the help of what they called the Reserve Forces (al-Quwat al-Radifa[2]). However, the implementing of the deal halted as the Reserve Forces (al-Quwat al-Radifa) carried out mass executions against elements of ISIS.

"the agreement started to be implemented, and actually 700 elements of ISIS, along with their weapons and families, were moved from Hawd al-Yarmouk (basin) to Masaken Jalin and the Sharika Libiya in Daraa province. After that, they were moved on batches, over Friday and Saturday July 28 and 29, 2018, in total secret to Hawsh Hamad area located in al-Lajat area adjacent to the north and west countryside of the ISIS-held Diyat area, which is east of al-Sweida. But the deal halted and the rest of the elements were not moved nor the abductees residents from al-Sweida were released because the Reserve Forces (al-Quwat al-Radifa) executed about 48 elements of ISIS who had surrendered in Hawd al-Yarmouk (basin) to be moved under the deal.

Regarding the executions, Mohammed al-Share', a member in the office documenting the martyrs (Martyrs of Daraa), in an interview with STJ on August 1, 2018, said that elements of ISIS surrendered to the Reserve Forces (al-Quwat al-Radifa) stationed in towns of Tafas and Hayt and then were moved to detention facilities inside both towns. The activist confirmed that there had been civilians among the detainees but their precise identity and number are unknown.

"this is the first direct extrajudicial execution. Both ISIS and the opposition factions had already mutilated the bodies of the dead and had executed the captives, but this is the first direct operation in mass numbers. Jaysh al-Thawra, who recently joined the Reserve Forces (al-Quwat al-Radifa) implemented the execution and shot more than 25 detainees of ISIS. We believe there are civilians among those executed and we are trying to know their identities and number. The execution took place in Hayt Valley after the captives were transferred from the detention facilities within the town." The activist said quoting sources in the area.

There are about 55 elements of ISIS present in Hawd al-Yarmouk (basin) following the deal reached between the Syrian regular forces and ISIS to move about 1500 elements. Besides, estimated 1500 civilians  are besieged in Koya Valley,  according to al-Share'. 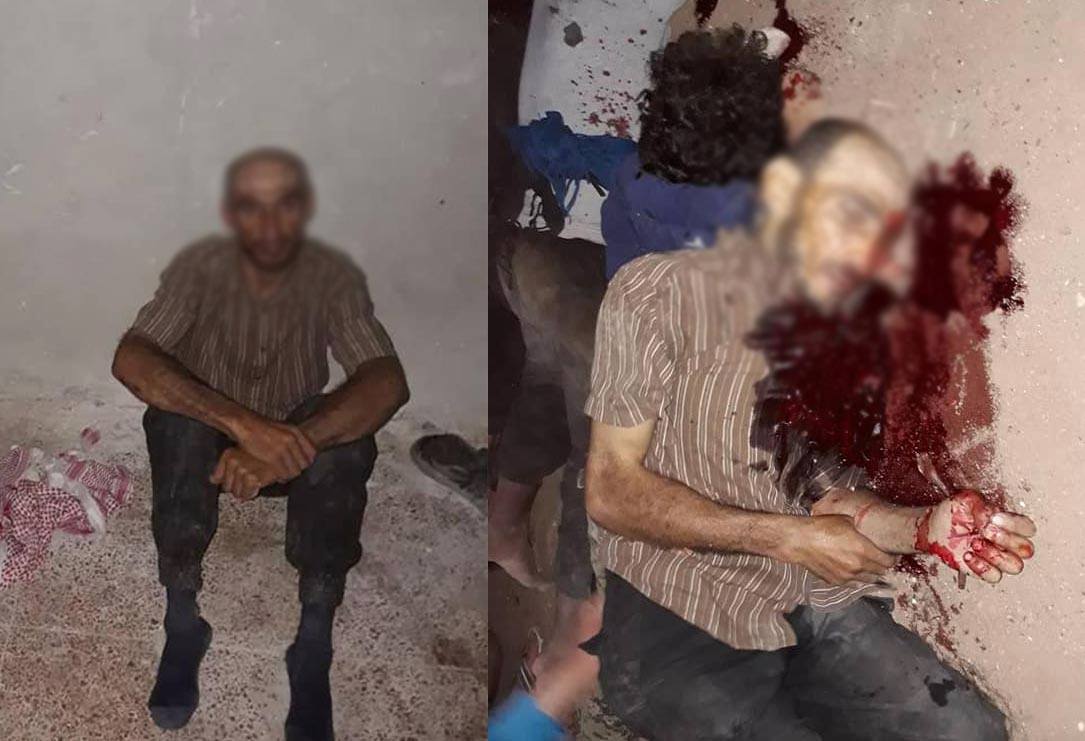 An image of one of the captives before and after the summary execution by the Reserve Forces (al-Quwat al-Radifa) in Hayt Valley on July 31, 2018.

STJ's field researcher said it very difficult to verify the presence of civilians among the captives who were executed, but it is certain that no women or children were among the captives executed by the Reserve Forces (al-Quwat al-Radifa). He noted that the Reserve Forces loyal to the Syrian regular forces in the campaign against Hawd al-Yarmouk (basin) are fighters who belong to Jaysh al-Thawra, Tasil Military Council, and fighters from Hayt town. 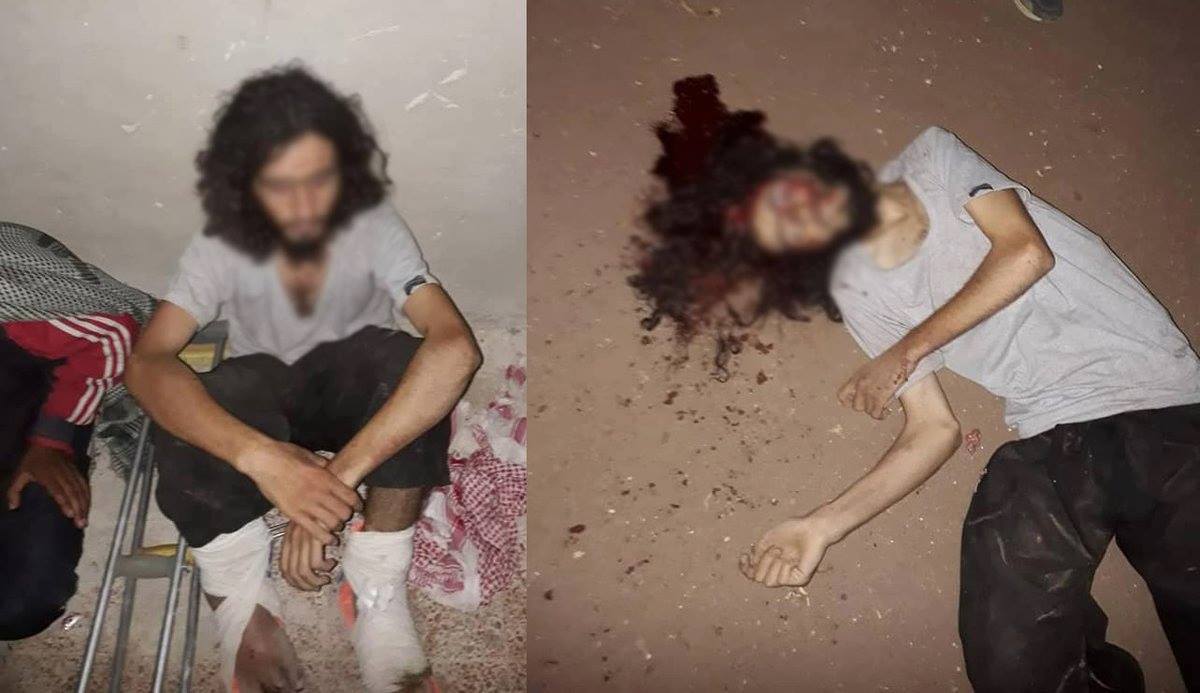 An image of one of the captives before and after the summary execution by the Reserve Forces (al-Quwat al-Radifa) on July 31, 2018.

On the other hand, Azzam, the activist said the Syrian regular forces sent military reinforcement to the east countryside of al-Sweida after moving ISIS elements under the deal. 300 fighters from the 15th Special Forces Division in addition to 8 tanks were spotted brought to the east countryside. ISIS was monitored moving in the south countryside and carried out an offensive against the Khalkhala Military Airport in the north countryside on August 1, 2018, which resulted in the death of 8 elements of the Syrian regular forces. ISIS-run Amaq News Agency reported the death of 45 of its fighters due to the operation.

An image of an announcement showing the outcome of the military operation launched by the Islamic State against al-Sweida province, published by Amaq News Agency loyal to ISIS.

The Islamic State, also known as ISIS, had launched bloody attacks on different parts of al-Sweida province resulting in the killing on injuries of dozens of civilians on July 25, 2018. The attacks coincided with kidnapping of at least 22 women and children, in addition to the carrying out of extrajudicial execution against two civilians from the Druze sect. STJ published detailed reports and testimonies on all these incidents.

[1] For more information on the incidents, please read the report released by STJ on July 30, 2018, entitled "21 Women and Children Kidnapped, Toll Victims of Bloody Attacks Rise in al-Sweida" on the following link: https://stj-sy.com/en/view/650

[2] The Reserve Forces (al-Quwat al-Radifa) are members of the opposition factions who conducted "reconciliation" with the Syrian regular forces under an agreement between both sides to end the hostilities in Daraa province. It contains hundreds of elements from "Liwaa Ahrar Tafas, Mu'taz Billah Army, Alwiyat Qasioun, Jaysh al-Thawra, the Headquarter Operation of "Watasimo", al-Harrah Military Council, Tasil Military Council, Swords of Truth Room, Liwa Ahrar Qita, Manifest Victory Operations room, and other factions from the east of the province."

[3] An alias of an activist who withheld to disclose his identity for security reasons.