On July 25, 2018, at least 50 persons, including women and children, were killed and dozens injured- in a preliminary toll death- as a result of suicide bombings and blasts that targeted sporadic areas in the predominantly-Druze al-Sweida province located south of Syria. The organization that called itself "the Islamic State" known as ISIS declared responsibility of the attacks, which coincided with its ground military offensive against villages located north of the province.

Dalia Hamza[1], the local activist who lives in al-Sweida city, said in an interview with STJ on July 25, 2018, that at 6:00 a.m, a suicide bomber wearing a suicide vest blew himself up in the vegetable market located at "the Mehowari Street which means the axis street" in al-Sweida city when some traders gathered around an apricot-loaded vehicle. Following the blast, militants dropped hand grenades on the workers at the market and shot live bullets, killing and injuring many civilians.

"Another explosion took place in al-Maslakh neighborhood located in al-Sweida city at around 9 in the morning. A suicide bomber detonated himself after the residents chased him, but this explosion left no casualties." Hamza said.

Elements of ISIS and members of the Bedouins, who pledged allegiance with Daesh, launched sporadic offensives at around 6:30 a.m. on the villages in the east countryside of al-Sweida, known as Tarba, Douma, Shabaki, Rami, al-Sharihi, Tima, Bosan, al-Mtoneh, al-Sowaimareh, using light and medium weapons and bombs, and committed massacres in these villages, since they clashed with the locals under total absence of the Syrian regular forces. The clashes continued in both villages of Shabaki and Tarba until the evening of July 25, 2018, when a local armed group, including Rijal al-Karama"[2] intervened, the activist Hamza said.

"50 persons were documented dead in the attacks, including women and children. The death toll expected to rise due to the seriousness of the injuries." she added.

In the same context, media reports quoting the director of the Health Directorate[3] in al-Sweida said the toll deaths topped 166 and 180 injured as a result of the attacks throughout the province. 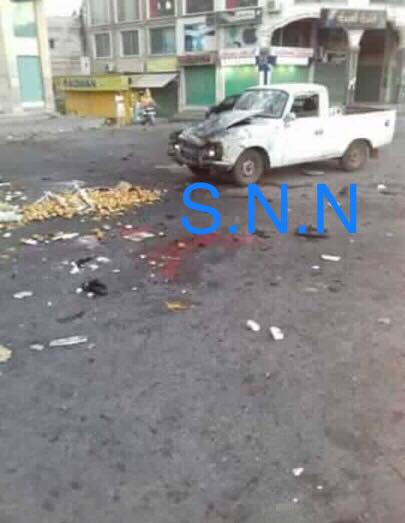 Image posted by Swaida News Network on July 25, 2018, showing signs of blood and a damaged vehicle following the explosion that targeted the vegetable market in al-Sweida.

In turn, Swaida News Network posted a video footage showing a hanged man around whom gathered lots of people, it said to be a suicide bomber, an element of ISIS, who attempted to blew himself up with the suicide vest in front of the National Hospital. STJ could not verify the identity of the hanged person yet. 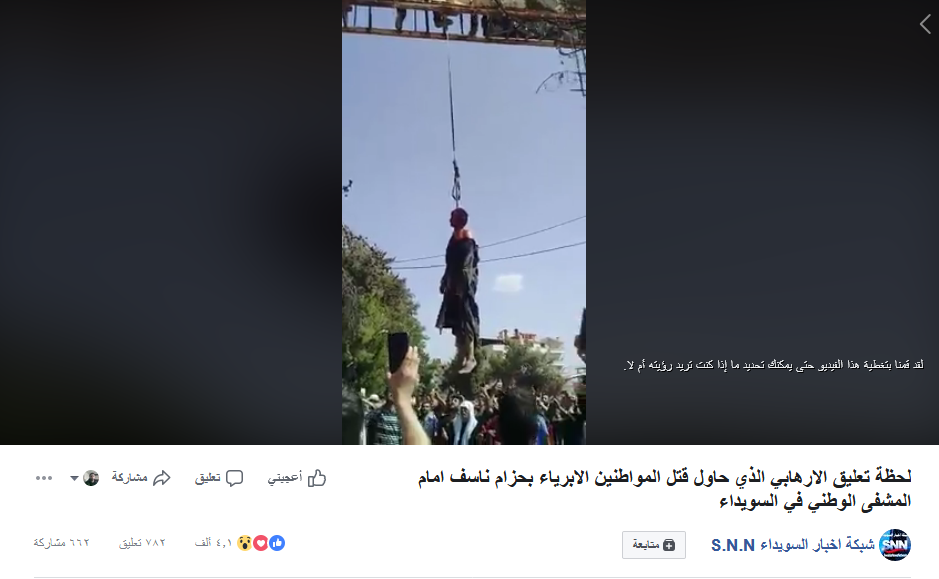 An image taken from the video footage published on July 25, 2018, by Swaida News Network and said to be a suicide bomber, an element who belongs to ISIS, who tried to blow himself up with a suicide vest in front of the National Hospital.

On the other hand, the Islamic State via its news outlet Amaq News Agency, announced

responsibility for the attacks that hit al-Sweida province, saying it targeted Syrian regular forces security centers and that the attacks have killed 100 of its fighters. 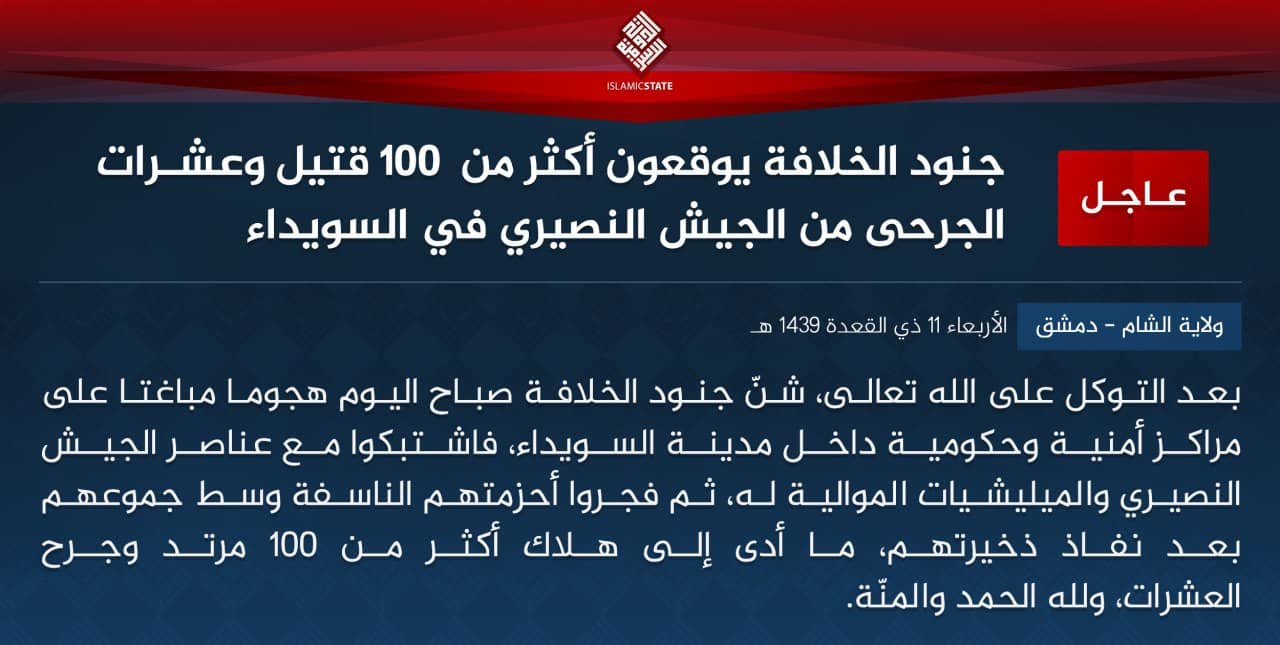 An image of the Islamic State- ISIS's announcement claims responsibility of the attacks that hit al-Sweida province on July 25, 2018.

The Syrian regular forces had evacuated fighters of the Islamic State (ISIS) and their families from al-Tadamon neighborhood and al-Yarmouk Camp located in the southern part of the Syrian capital Damascus and the adjacent al-Hajar al-Aswad city to the Syrian Desert (Badia) in the area that stretch from west of al-Mayadeen in Deir az-Zor to the east of Palmyra city, adjacent to the east of al-Sweida province. The evacuation was completed on May 21, 2018, and included 1700 fighters along with their families, local media outlets reported.

STJ is monitoring the incidents that took place in al-Sweida province, and will respectively publish the latest updates.

[1] The identity of the witness is withheld based on her wish. The mentioned name is an alias.

[2] Akl Sheikhdom takes over  the supreme spiritual and social service of the Unitarian Druze community in Syria by virtue of the laws in force which have consolidated their full autonomy to their religious affairs and their charitable endowments. The Sheikhdom legislates the systems and administers of their institutions in compliance with the spiritual provisions of the community and its confessional privileges and laws and regulations.

[3] It administratively follows the Syrian Ministry of Health of the Syrian government.