This is the second such incident through June 2018

Image published by Smart News Agency on June 21, 2018 shows the location of the twin bombings near the Carlton hotel in Idlib city.

An IED and a car bomb blasts occurred simultaneously on June 21, 2018, near the Carlton Hotel in Idlib city[1], targeting one of the Hay'at Tahrir al-Sham/HTS[2] headquarters, which resulted in 43 casualties dead or wounded. This targeting is the second in the same month, as the Islamic State, also known as ISIL, previously targeted another headquarters of HTS, located in the Preserves Factory, west of the city, on June 13, 2018.

In an interview with STJ, on June 21, 2018, the eyewitness "Basil Hawa" said that an IED exploded near the Carlton Hotel, where the Syrian Red Crescent based, which is located in the vicinity of the HTS headquarters, and that was followed by a car bomb explosion several minutes later. Hawa goes on to say:

"When the civil defense teams and civilians rushed to the site to help the wounded resulted from the first explosion, the second explosion occurred in the same place, near HTS headquarters, and immediately killed a civil defense member, a child, a woman and a man." 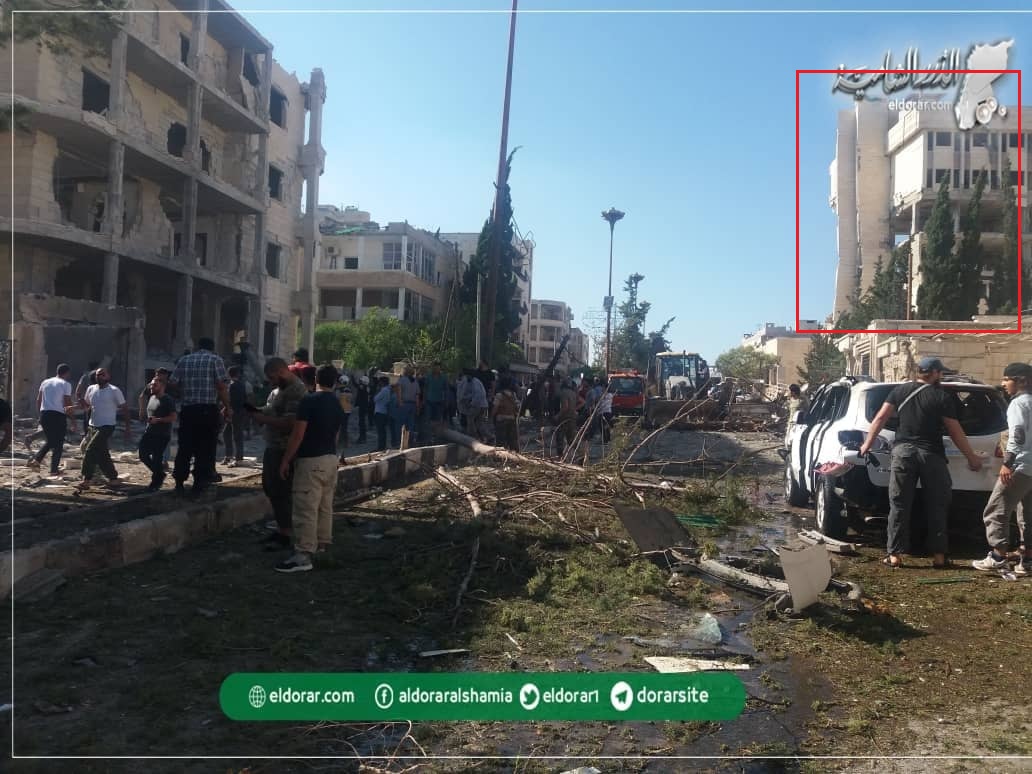 Image shows the Carlton Hotel building near the site of the explosion, which hit the city on June 21, 2018, according to eyewitnesses.
Photo credit: El-Dorar al-Shamia Network.

For his part, the eyewitness "Ahmed Rahal" said in an interview with STJ, on June 21, 2018, that he was there when the first explosion caused by a motorcycle carrying explosives occurred, which specifically took place west of the al-Tawheed Mosque on the main street leading to Arihah town.

Rahal said that the blasts left 8 deaths and 35 injuries, including several fighters of the military factions, besides some charred bodies which were unidentified, that they couldn’t determine whether they belonged to civilians or to fighters from HTS, since the second explosion was close to their headquarters, and he continued:

"The HTS headquarters is located near the Carlton Hotel, and it is heavily fortified, which protected it from the explosion affects and that in turn excludes the possibility of the fell of HTS agents inside the building. Note that HTS has evacuated and closed the headquarters following this explosion. " 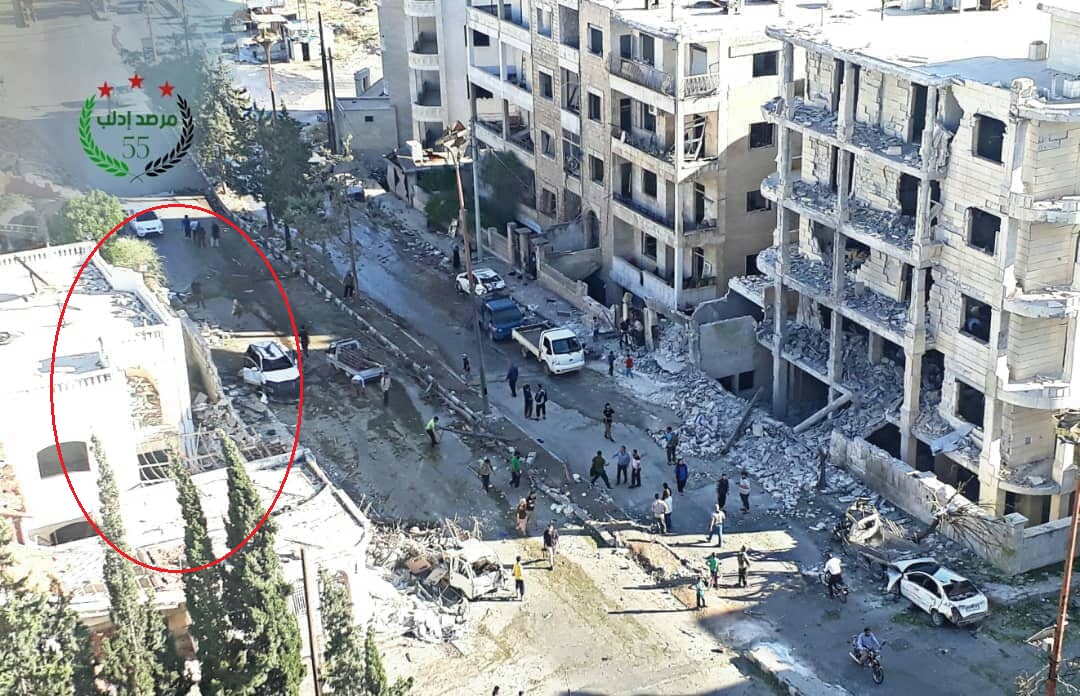 Image published by "Idlib Observatory 55", shows the HTS headquarters, as confirmed to STJ by the eyewitness Ahmed Rahal.
Taken on June 21, 2018.

According to the eyewitness, "Rahal", the people of the area believed that ISIL was likely behind the twin bombings, where he said:

“ISIL used to carry out such explosions in Idlib and usually claims responsibility for ones resulting in causalities in HTS ranks, as was the case in the bombing of 13 June.”

The Syrian civil defense in Idlib Governorate published a footage showed the first moments of the motorcycle explosion, which resulted in the kill of eight civilians, including a volunteer in its ranks, Mustafa Qassab, and the injury of another, along with 34 civilians. 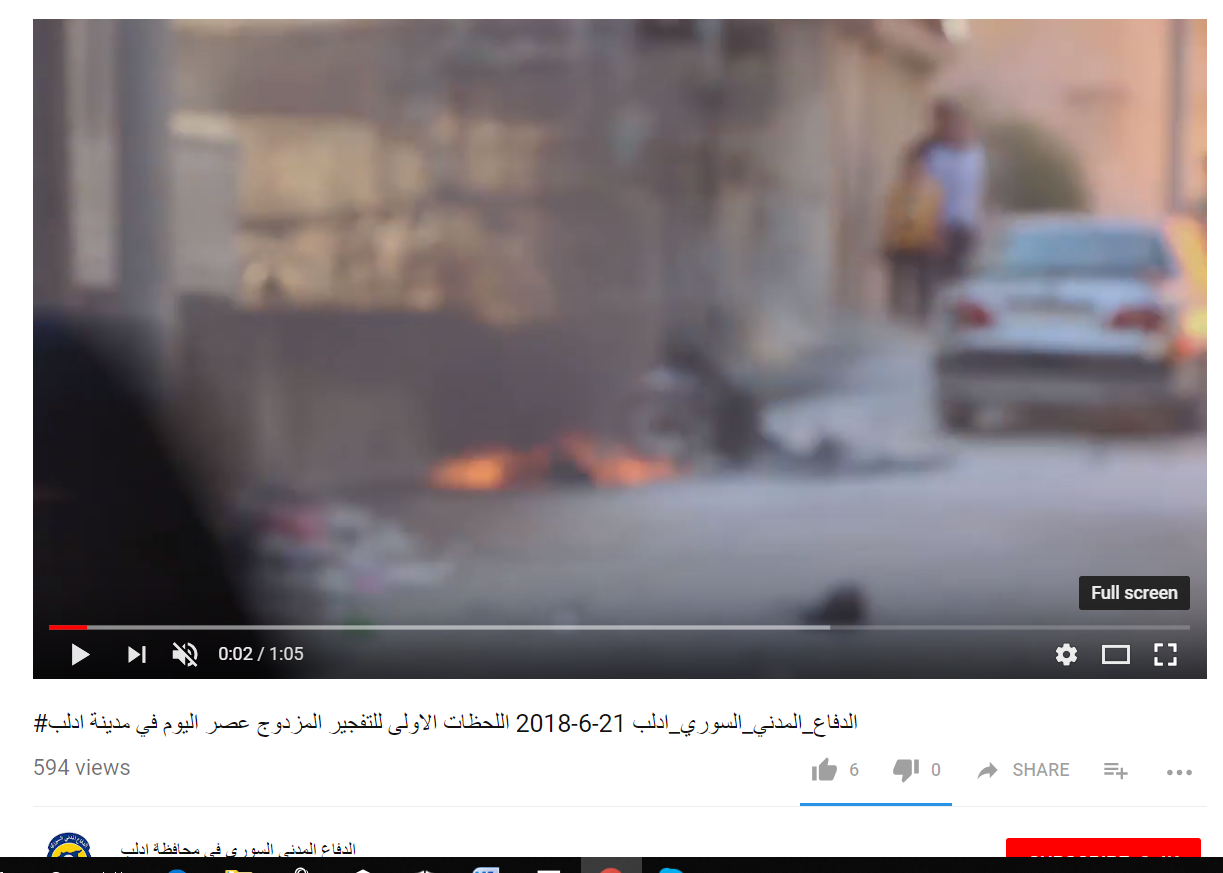 A shot taken from the footage published by the Civil Defense on June 21, 2018, shows the explosion of an IED planted in a motorcycle. 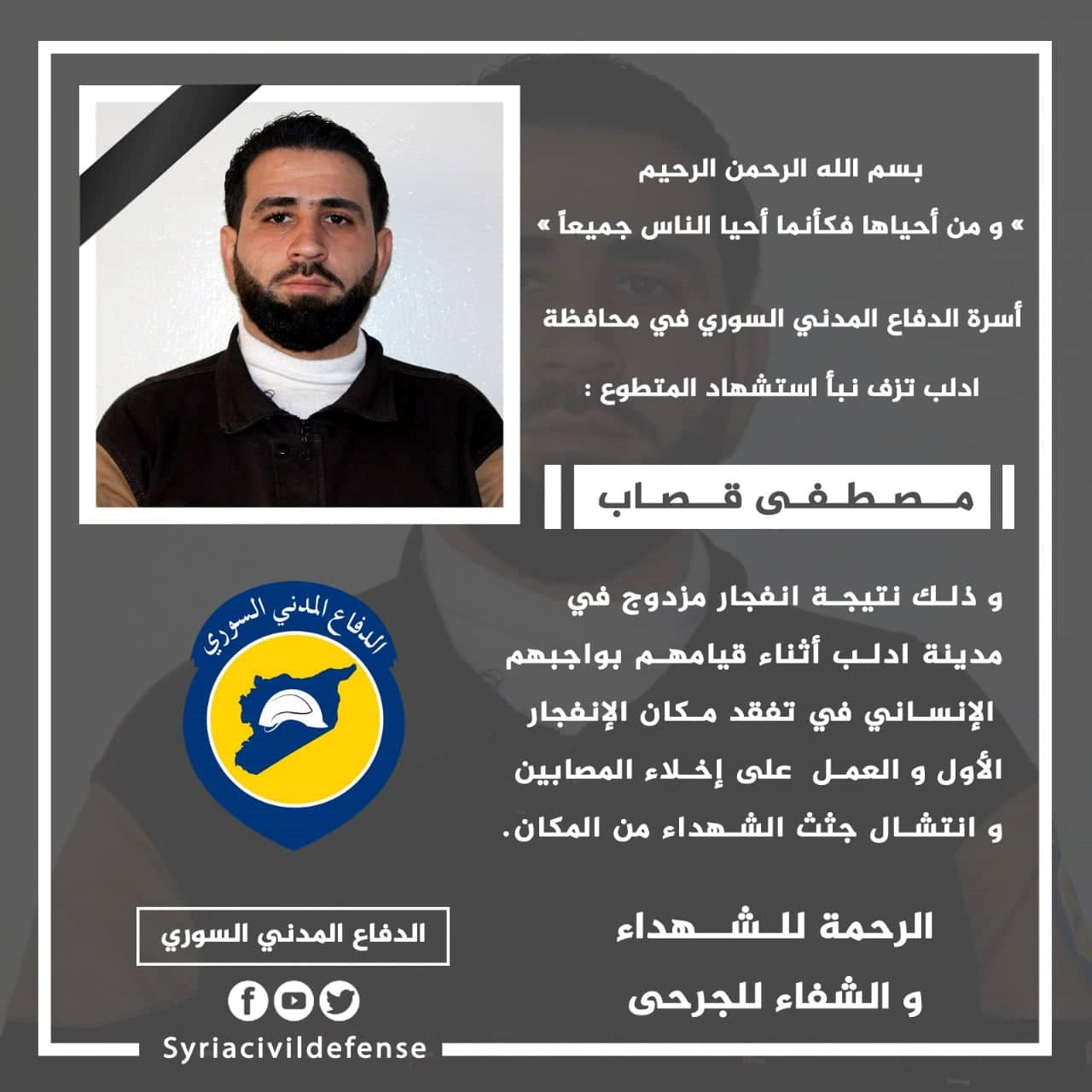 In a similar incident, on June 13, another bombing hit the headquarters of the HTS in the "Preserves Factory" west of Idlib, resulted in 14 causalities among HTS fighters. ISIL claimed responsibility for the blast, by publishing a footage through its Amaq News Agency and loyal Telegram channels, showing a car bomb explosion and entitled the “An Appropriate Recompense”, where the blast was as retribution for ISIL fighters who were killed earlier in their secret camp by HTS, as stated by ISIL.

The courthouse building in Idlib City was previously hit by a car bomb, on May 12, 2018. STJ has prepared a detailed report on that incident entitled; “A Bomb Car Kills 14 and Injures Up To 30 in Idlib City”

[2] On January 28, 2017, several Jihadi factions in northern Syria announced the merger under the name of "Hay'at Tahrir al-Sham/HTS" They were;  Jabhat Fateh al-Sham (formerly Al-Nusra Front), The Nour al-Din al-Zenki Movement, Liwa al-Haqq, Jabhat Ansar al-Din, Jaysh al-Sunna and Ansar al-Sham. However, The Nour al-Din al-Zenki Movement declared its secession from HTS against the background of the recent clashes between the latter and Harakat Ahrar al-Sham al-Islamiyya in northern Syria on 15 July 2017.