Hussam Mahmoud, Hasan Younis, and Baker Younis Were Released Respectively, But the Fate of Amjad al-Maleh is Still Anonymous

Hayat Tahrir al-Sham[1] (HTS) released the third activist of Madaya Activists who had been arrested earlier for unknown reasons in Idlib city on December 9, 2017, whereas fate of the fourth detainee, the activist Amjad al-Maleh, remained unknown until this moment, according to what one of the newly released persons reported to STJ.

In an interview with STJ on June 9, 2018, Hussam Mahmoud, the released activist, said that HTS released him on June 6, 2018. He said he was detained in Idlib Central Prison run by Salvation Government[2] on charges of "photographing without a license", and continued saying :

"I had not been exposed to any kind of torture, and I was released after the general amnesty[3] issued on June 4 with the guarantee of a person (guarantor). I might be summoned to investigation once again if something rose up in the case for which I have been arrested.”

On January 30, 2018, HTS had released the Syrian civil defense activist Hasan Younis along with Baker, his brother, after it had detained them for 50 days. At the time, STJ had published a report, explaining the arrest of the four activists. In another context, 27 Syrian organizations called in a statement for the immediate disclosure of the fate of the detainees, denounced the detention and declared solidarity with them until their release.

On the other hand, Reporters Without Borders (RSF), that defends the rights of journalists and monitor their status, released a statement calling for the release of the activist Amjad al-Maleh, adding that journalists and activists detained by HTS were being subjected to ill-treatment and some forms of torture, which are actions punishable by international law, and that the activists were subjected to extremely violent interrogations, according to its statement issued on June 13.

The arrest of the four displaced activists was not the first carried out by HTS; it had carried out an intensive arrest campaign on August 24, 2017, in Ma'arat Mesreen city, located in Idlib, and arrested 10 youths who were forcibly displaced from Madaya city along with three others from Serghaya town and one person from Baqin town with no clear charges or clarification of why they were arrested. Moreover, their fate is still unknown, according to the Geroun Net, quoting a source from the city. Whereas, an activist resident in Zabadani, who preferred anonymity, said in an interview with STJ that the youths arrested on August 24, 2017, were charged of communicating with the Syrian regime as they were working to conduct a reconciliation (settlement of their status) to return to the regime-held city of Zabadani.

HTS carries out arrests from time to time on the pretext of searching for people suspected of belonging to the Islamic State organization (ISIS) and others who communicate with the Syrian regular forces. it usually searches houses of the displaced persons; STJ had published details of one incident on May 24, 2017. 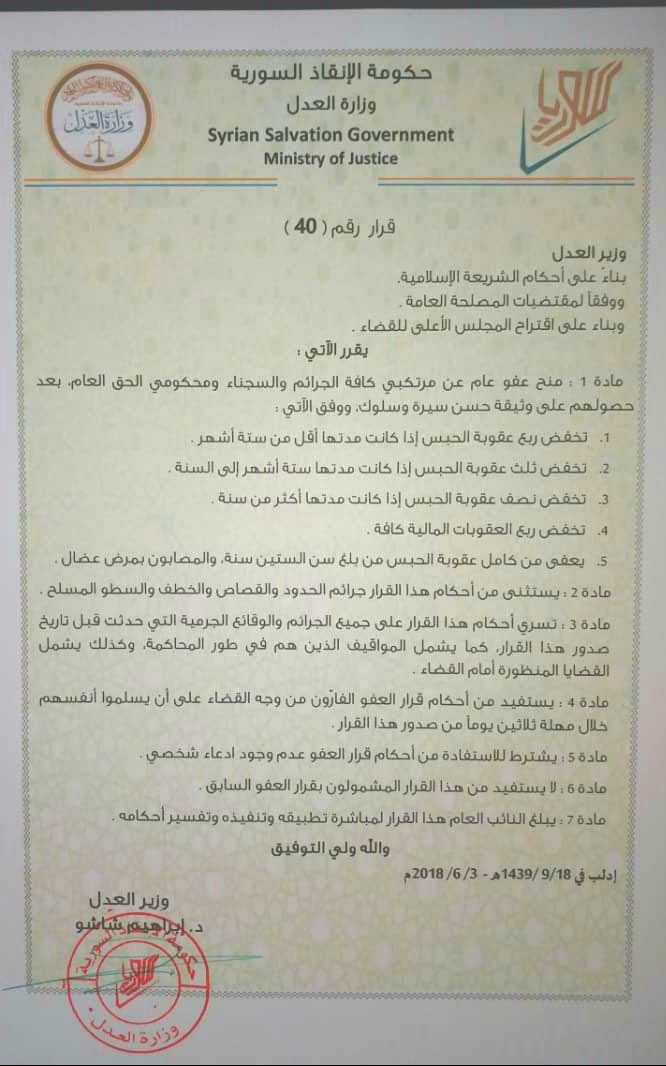 [1] January 28, 2017, Several jihadist factions in northern Syria announced the merger under the name “Hayat Tahrir al-Sham-HTS”, they are: Fateh al-Sham Front- formerly al-Nusra Front, Nour al-Din al-Zenki Movement, Liwaa al-Haqq, Ansar al-Din Front, Jaysh al-Sunna and Ansar al-Sham al-Islamiyya. However, at the background of the recent outbreak of confrontations between HTS and Ahrar al-Sham al-Islamiyya in the north of Syria on July 15, 2017, Nour al-Din al-Zenki Movement announced its separation from HTS on July 20, 2017.

[2]   On October 7, 2017, the formation of the so-called Salvation Government was announced to administer Idlib Province and HTS-held areas. The Salvation Government emerged from a "Constituent Body", which in turn emerged from the "General Syrian Congress" that was convened by HTS on September 17, 2017. All its sessions and government formation sessions were held at Bab-Hawa crossing border with Turkey.

[3]  On June 4, 2018, the Salvation Government issued the second general amnesty during the current year to release the prisoners in its jails in Idlib province. The general amnesty included all perpetrators of crimes, inmates and convicts of public rights, except those convicted of hudud crimes, retaliation (Qisas), kidnapping and robbery, as well as those who had benefited from an earlier amnesty decision.