Shelling a Shelter in Maar Zita Kills Nine Civilians, Including Children and Women

The Attack Took Place in Idlib Countryside on May 9, 2018, by a Warplane Launched from Hmeimim Military Airbase

Image shows attempts by the Civil Defense teams while pulling out bodies of the civilian victims from under the rubble following an attack on a shelter in Maar Zita town on May 9, 2018. Photo credit: STJ

Introduction: The Syrian regular forces and their allies have continued their military escalation on Idlib province during May 2018. Nine civilians from one family were killed following shelling a shelter in Maar Zita town located in Idlib countryside. Several testimonies obtained by STJ confirmed that a warplane, believed to be Russian, carried out an airstrike on the place where the shelter lies using two vacuum (thermobaric) rockets, and killing an entire family, who had sheltered in it to escape the shelling; the majority were women and children,.

According to STJ's field researcher, Maar Zita town[1] is about 15 km from Khan Sheikhoun and many locals go there given it is a relatively small and safe town, besides it has no military headquarters, and the local council is fully responsible for administrating all aspects. However, the recent bombardments in this town, particularly following the shelter attack on May 9, 2018, and targeting civilian's houses on May 6, 2018, prompted many townspeople to displace to safer neighboring areas, such as Ma'aret Hurmah village. This horrific massacre occurred as a result of dropping two vacuum rockets by warplanes, one of them fell directly on the shelter and the other one fell in its surrounding.

The Syrian regular forces and their allies, through those attacks, were deliberately causing as much casualties as possible, the field researcher said.

The Syrian regular forces and their allies had already attacked a shelter piled up with civilians in Kafr Battikh town located in Idlib countryside on March 21, 2018, killing 20 civilians, mostly women and children, according to an earlier report published by STJ; the report entitled "Grave Massacre Claims Lives of 20 People Mostly Children in Kafr Battikh, Idlib Countryside. The Attack on March 21, 2018, was on a Shelter Following  Civilians Hid within Fearing of Warplanes".

Furthermore, they had committed another massacre that claimed lives of 43 persons, including children and women, when they bombarded a public market that was filled with civilians in Harem city on March 22, 2018; concerning this incident, STJ published a report entitled "A Horrific Massacre after Bombing a Popular Market in Harem City- Idlib Countryside. The attack claimed the lives of 43 civilians, including women and children."

At 8:00 pm, on May 9, 2018, a warplane believed to be Russian, targeted the residential neighborhood in Maar Zita, and few minutes later, it came back and bombed a shelter that housed a family, killing 9 civilians from the same family. Mhna al-Qassoum, head of the local council in Maar Zita town, confirmed this and said to STJ,

"on that day, a Russian warplane launched an airstrike on the town and dropped several thermobaric rockets, causing significant material damage on civilian's property. Then, many civilians sheltered in a basement and holes dug in the ground for this purpose. Few minutes later, the warplane returned to carry out another strike targeting a shelter that al-Hussein Family housed in it, causing a massacre as the nine members of the family were killed, the majority of them were children and women. It should be mentioned that prior to the massacre, a reconnaissance aircraft was hovering in the skies and it was monitoring movement of the civilians especially those who go inside the shelters, and then sent ordinates to the warplanes in order to target them. The town has already been attacked with similar airstrikes by warplanes on May 6, 2018, when civilian houses were targeted, consequently large numbers of civilians displaced towards adjacent villages such as Khan Sheikhoun and Ma'arat Hurmah."

An image shows some attempts by the Civil Defense in pulling out the victims from under the rubble following the bombardment on a shelter in Maar Zita town, May 9, 2018.
Photo credit: STJ

In another testimony obtained from Ahmed Abdulkarim Hussein, a relative of one of the victims, who told STJ, that the locals learned, through observatories, that a warplane believed to be Russian had taken off from the Hmeimim military airbase located in Latakia province and headed towards Idlib province, specifically to Maar Zita. In this regard, he said:

"Around 7:45 p.m. that day, while I was in a visit to my brother's house, we learned through the observatories that a warplane was flying towards the town. Immediately, I rushed to my house, whereas my brother and his family, composed of his wife and six children, hurried to the shelter near their home. Meantime, almost five minutes after I arrived home, the warplane carried out its first raid on the southern outskirts of the town, and only minutes later, it came back and carried out another raid using vacuum (thermobaric) rockets very close to my brother's house. Therefore, I went there quickly, and was shocked when I found out that their shelter had collapsed and blocked completely. Within minutes, the Civil Defense teams arrived to work on opening the shelter and rescue the trapped from under the rubble. Their work required a long time, so they all passed away because the oxygen was cut off while they were under the rubble."

Al-Hussein indicated that just few days earlier, the town had been exposed to airstrikes with warplanes believed to be Russian, knowing that the town is completely free of any military headquarters and it houses many civilians who were displaced from the countryside of Damascus and Homs. He added that many locals in the town now prefer to stay inside their homes rather than taking refuge inside the shelters and holes that they had dug before because they are fearful of repeating the shelling on the shelters once again.

A video footage published by the Civil Defense teams showed a part of the process of pulling out bodies of the children victims from under the rubble after the bombardment on a shelter in Maar Zita May 9, 2018.

An image taken from the previous video footage showing one of the children victims who were pulled out following the bombardment on a shelter on Maar Zita May 9, 2018.

Obada al-Thekra, leader of the Syrian Civil Defense at Ma'arat al-Nu'man strip, told STJ that they had received a call at 8:10 p.m. on 9 May 2018, in order to send rescue teams to Maar Zita because there was a shelling on a shelter by a warplane believed to be Russian. That demanded the immediate intervention of rescue teams and the bringing of heavy machinery to remove the rubble from over the trapped. In this respect, he continued:

"When we arrived at the impact site, extent of the destruction was so great, besides all the shelter outlets were completely blocked because of the rubbles, so we worked for three consecutive hours hoping to pull out the trapped victims. After hard work, we were able to open the outlet and took out two women, a man and six children, but they were all dead, because the shelter was a hole of about 2 meters deep, and it completely collapsed because of the intensity of the rockets. I admit that I was so touched because of what happened; it was one of the toughest situations I have ever had."

Akram al-Mesri, a media activist in Maar Zita, reported to STJ that just minutes after the incident, he visited the strike location and was surprised at the extent of the damage caused by the raids that targeted the town with vacuum rockets. He said:

"It was clear that the warplane had targeted the shelter site with two vacuum rockets, one of them fell directly on the shelter while the other fell near it, causing terrific devastation that shocked us. While I was close to the shelter documenting moments of pulling out the victims from under the rubble, I experienced a very harsh scene, as most of the victims were children between 3-13 years old. They thought that hiding inside a hole would keep death by bombing away from them, but that was not true."

An image showing the aftermath after an aerial bombardment on a shelter in Maar Zita, on 9 May 2018. Photo credit: the media activist, Ali Haj Suleiman 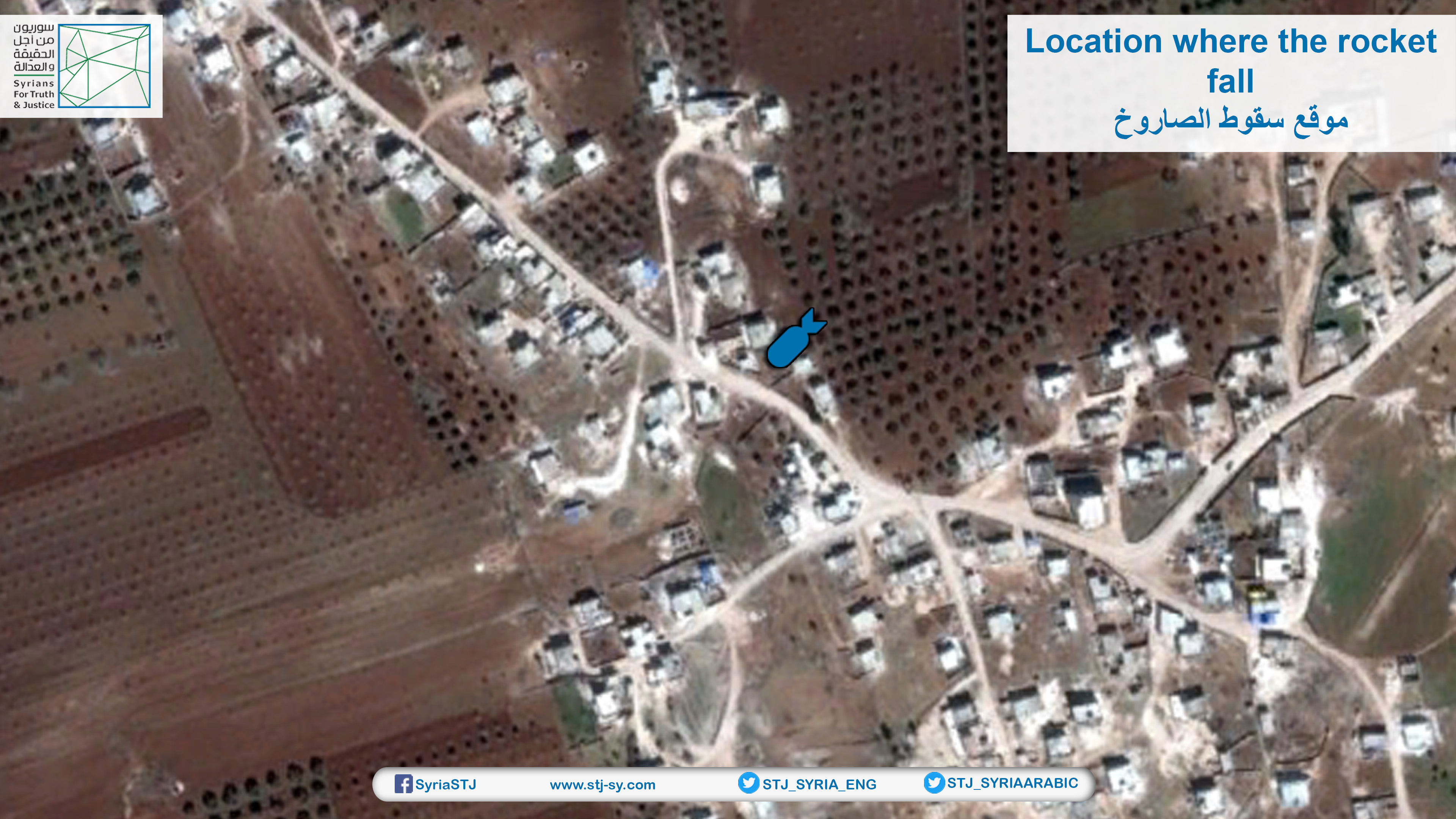 STJ's field researcher could document identities of the victims who were killed in the attack on a shelter in Maar Zita on May 9, 2018; the majority of them were children and women. They are: