Cover photo: A side of the fires erupted in Douma city after being bombarded with incendiary weapons armed with phosphorous-like substances on March 23, 2018. © Douma Coordination

Preface: Eastern Ghouta cities and towns were subjected to violent military attacks by Syrian regular forces and their allies during March 2018. Douma had a large share of these attacks, as it was shelled with numerous types of weapons, including the incendiary, where it was subjected to aerial bombardment using incendiary weapons loaded with phosphorous-like substances, which resulted in significant material damage to civilian property, but no causalities were reported.

According to STJ field researcher, the Syrian regular forces and their allies have deliberately targeted the residential buildings in the city of Douma with incendiary weapons, in an attempt to inflict physical damage to houses and properties of civilians, in an effort to put those houses out of service and made them unfit for habitation, noting that people of the city managed to extinguish fires with simple equipment, after the fire brigades had refused to go to the places of attacks, because they were frequently being targeted by the Syrian regular forces and their allies.

The Syrian regular forces and their allies had already used incendiary weapons in their bombardment of Eastern Ghouta cities and towns during their last military campaign, where STJ prepared a report entitled "Repeated Attacks with Incendiary Weapons, Cluster Munitions and Chemicals on Eastern Ghouta”; a flash report documenting the events of 7 March 2018 in Hamoryah and those of 10 and 11 March 2018 in Irbin. The organization had also published a further report entitled "Syrian Regime Bombards Eastern Ghouta with Incendiary Substances Similar to Phosphorous"; a report covers incidents of incendiary weapons usage during February 2018”.

It should be recalled that the Syrian regular forces and their allies had reached an agreement with The Army of Islam on April 8, 2018, which required the liberation of all the abductees[1] held by the latter, in exchange for being allowed, The Army of Islam militants along with their families, to leave Douma towards northern Syria.

This agreement was preceded by two similar agreements; the first with Faylaq al-Rahman, on March 23, 2018, which required evacuating militants of both Faylaq al-Rahman and Hay'at Tahrir al-Sham/Al-Nusra Front along with their families and any other civilians who did not wish to come back under Assad’s rule to northern Syria. The agreement, which included the towns of Irbin, Jobar, Ein Tarma and Zamalka, was preceded by a similar one between the Syrian regular forces and  Ahrar al-Sham al-Islamiyya Movement in Harasta on March 21, 2018, this agreement led to evacuate the militants of the Ahrar al-Sham al-Islamiyya Movement along with their families and civilians who wish to leave to northern Syria as well.

The United Nations Office for the Coordination of Humanitarian Affairs (OCHA) has described the situation in Syria as "bleak" in the wake of the UN Security Council resolution calling for 30-day ceasefire throughout the country.

At 11:30 p.m. on 22 March 2018, residential neighborhoods in Douma city were bombarded by warplanes, believed to be Russian, where they were hit with almost (22) air raids using incendiary weapons loaded with phosphorous-like substance. “Muhammad Salahi”, a media activist from Douma, confirmed that to STJ by saying:

"Douma became density populated after the displacement of many people from neighboring towns, but this did not stop Russian warplanes from bombarding the city that night with incendiary weapons. When they were launched, the rockets exploded in the air, just like fireworks, before they fall on the ground causing fires everywhere. About 22 air strikes then hit all Douma, including al-Quwatli Street, al-Corniche Street, Douma Hospital, the commercial market and al-Masaken area. The military aircraft continued to bombard Douma with incendiary weapons until the next morning, 23 March 2018, which resulted in major fire outbreaks in civilian properties.”

Image shows a side of the fires erupted in Douma city after being bombarded with incendiary weapons armed with phosphorous-like substance on March 23, 2018.

A footage of bombarding Douma with incendiary weapons armed with phosphorous-like substance, posted by Douma Coordination on March 23, 2018. 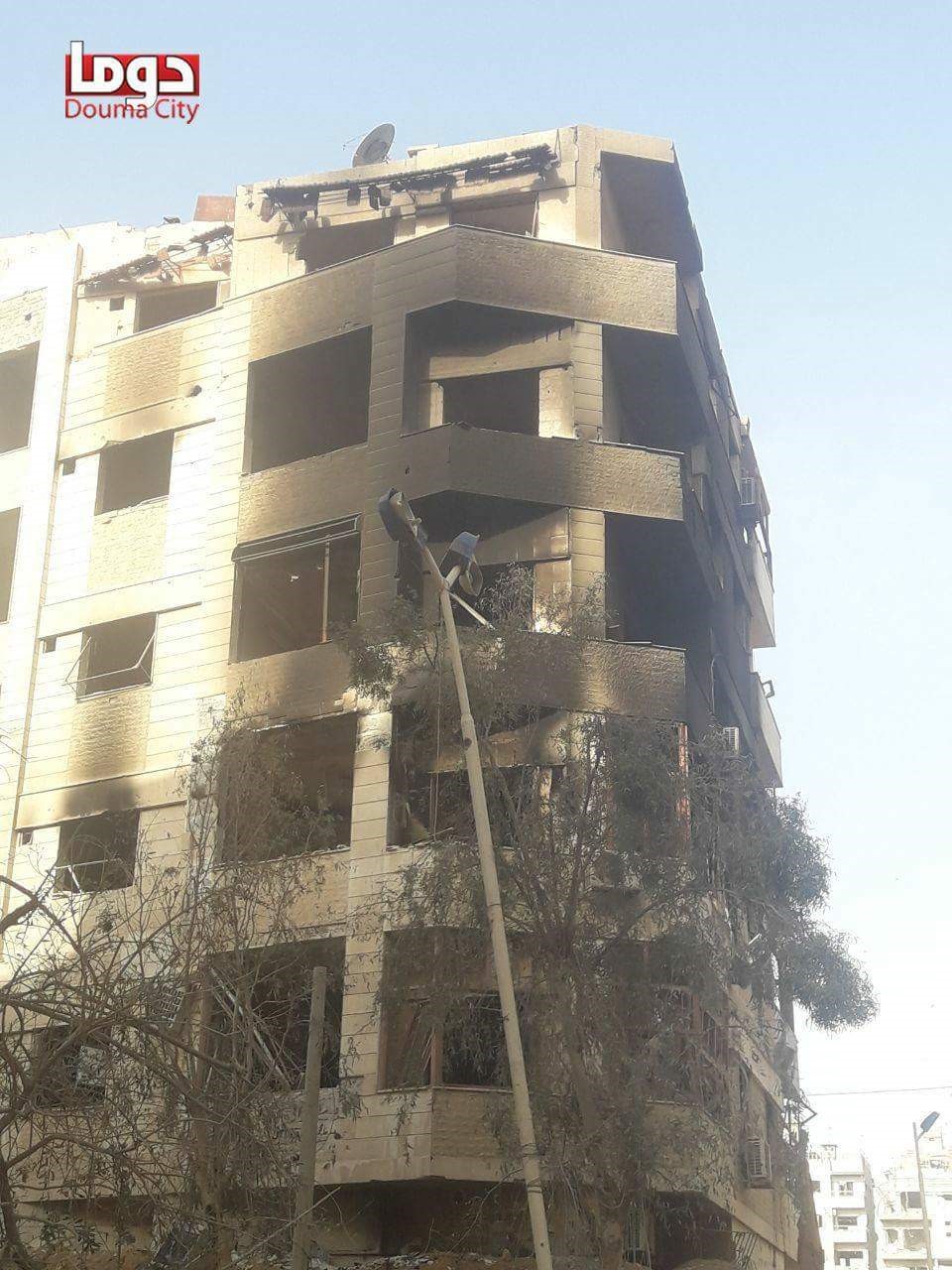 Image shows a side of the fires erupted in Douma city after being bombarded with incendiary weapons armed with phosphorous-like substance on 22 and 23 March 2018.

"Ali Slick", a native of Douma, told STJ, that the incendiary weapons attacks, which targeted the city on March 22, 2018, were initially hit "al-Saraya" area, which is known to have a large population and no military headquarters. In this regard, he said:

"At approximately 11:30 p.m., I was at home when al-Saraya area was raided by Russian warplanes which had dropped several rockets that we did not hear any explosion sound of, which was unusual, we instead saw lights lit up the skies of the entire area. I was harrying to the cellar, when I saw many people suffocating from the smell of burning, so I volunteered with some other neighborhood youths to put the fires out, we used dirt and available blankets. In the meantime, the warplanes returned and raided the area again, so we had no choice but to back and shelter inside cellars again.”

Slick added that many cars, buildings and trees in "al-Saraya" area had been burnt, despite the people's relentless attempts to extinguish fires, noting that the warplanes had raided the same area four consecutive times with only five minutes interval. He continued:

"Whenever we tried to put out the fires, the warplanes returned to target the area again. In spite of many appeals we made to fire crews to come and extinguish fires, they refused because they feared of direct targeting, especially since the reconnaissance aircraft did not leave the area that night.”

Video footage showed a side of fires erupted in civilian houses in Douma city being bombarded with incendiary weapons armed with phosphorous-like substance on March 23, 2018, posted by Douma Coordination.

Image shows a side of the fires erupted in Douma city after being bombarded with incendiary weapons armed with phosphorous-like substance on March 23, 2018.

[1] The detainees who were arrested for being accused of supporting the Syrian regime.