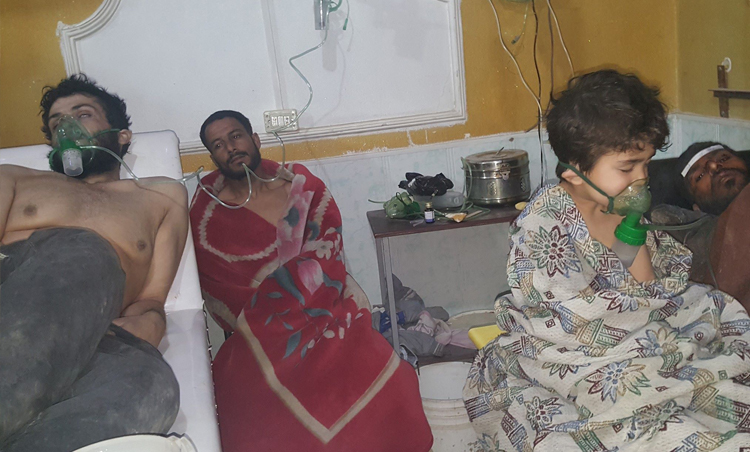 An image shows a number of people affected by the poisonous gas attack in the al-Shefonia town. Photo credit: Duma Coordination

Preface: Despite the repeated warnings by the international community for the Syrian government not to use chemical weapons during the war in Syria, the latter re-attacked al-Shefonia town with chemical weapons on February 25, 2018, which is the fourth consecutive chemical attack since the beginning of 2018 on the besieged Eastern Ghouta – Damascus countryside. The recent targeting resulted in many injuries among civilians and the death of at least two children, which reinforces the fact that using chemical weapons appears to be a systematic policy pursued by the Syrian government during its ongoing battles. As its first attack in 2018, occurred in the area between Duma and Harasta in Damascus Ghouta on January 13, 2018, the second attack took place on January 22, 2018 in the north-western area of ​​Duma, and the third attack took place on February 1, 2018 in Duma as well.

On March 7, 2018, the field researcher of STJ in Eastern Ghouta reported that the area between Saqba and Hamoryah was subjected to a chemical attack (the fifth since the beginning of 2018), which resulted in scores of casualties according to the researcher. STJ is now conducting the necessary investigations and will publish a special report in this regard as soon as it is finished.

At 6 p.m. on Sunday, February 25, 2017, al-Shefonia town- east Ghouta, with some 230 families, was targeted with toxic gas, which has led to many casualties among civilians, noting that the closest line of fighting between the Syrian government and the opposition factions was at the time about 2 kilometres away from the town of al-Shefonia.

On the same day, The Russian ministry of defense published a briefing on Syria stating: "Evidence has shown that the leaders of illegal armed formations in the Eastern Ghouta are preparing a provocation using poisonous agents in order to accuse the government forces of using chemical weapons against civilians."

A Map illustrates the targeted area, east of Eastern Ghouta, and shows the distribution of areas controlled by opposition factions as of the date of the attack.

A Map illustrates the targeted area, east of Eastern Ghouta, and shows the distribution of areas controlled by opposition factions as of the date of the attack

“Following the intense and unprecedented bombardment on Eastern Ghouta cities and towns, I went down with my family to one of the cellars in al-Jamieat area in al-Shefonia town, in search of a haven safer from our house. There was a helicopter flying over our heads, it threw a barrel, which started to fall making a very loud sound, but when it hit the ground, we didn't hear any sound of it which is unusual, we thought that it didn't explode. Then we, my family and I, started to inhale a strong and strange smell, following which I blacked out, and fainted. When I regained consciousness, I found myself in a medical centre.”

An image shows a number of people affected by the poisonous gas attack in the al-Shefonia town.

Kumait Agency published a video showing injured men and a child being treated as a result of the chlorine attack.

The impact of the poisonous gas was strong because it was concentrated, that many of the injured lost consciousness, according to the testimony STJ has get by the survivor Muhammad Ataya who continued by saying:

"Even when I regained consciousness, my situation did not stabilize, as I suffered from severe headache with shortness of breath for long hours"

The same day of the attack, the reporter Yaser Aldoumani published a video showing a killed child with a blue rope written on it "25/02/2018 al-Shefonia as a result of chlorine gas". The video also shows injured children, and men being treated in a medical facility as a result of the claimed chlorine attack.

The Damaski agency has posted a video footage on its Facebook page, showed the body of a child who died as a result of targeting al-Shefonia town by poisonous gas.

Damaski media agency published a video showing Yousef Albostany who is the director of Damaski news agency. He said: "25-02-2018 on Sunday, we are in eastern Ghouta which was targeted by the Assad forces with chemical gas. This child was killed today as a result of the chemical gas attack. We don't know if it's the chlorine gas or another one. There are many other civilian injured as well including women, men and children." Other photos about this incident was published by Damaski media agency on their twitter account.

STJ has met Nizar Balla, one of the ambulance volunteer members, who told us that the Syrian government targeted every living thing that moveth upon the earth in the town of al-Shefonia, which was turned into a ghost town, as its alleys were pretty desolated of people, and most of its roads were blocked with the rubble of the destroyed houses being shelled with missiles and rockets. Nizar said:

"We have received several reports from civilians about targeting al-Shefonia town with toxic gas. So we immediately rushed to the scene, where we have faced many difficulties as two paramedics were suffocated and severely dizzy after inhaling poisonous gas, we aid them and as many injured civilians as we can. Unfortunately we couldn’t reach all the injured fast enough due to the intensification of the shelling on the area and the blockage of most of the roads inside the town of al-Shefonia because of rubble, which caused our delay in helping many cases ". 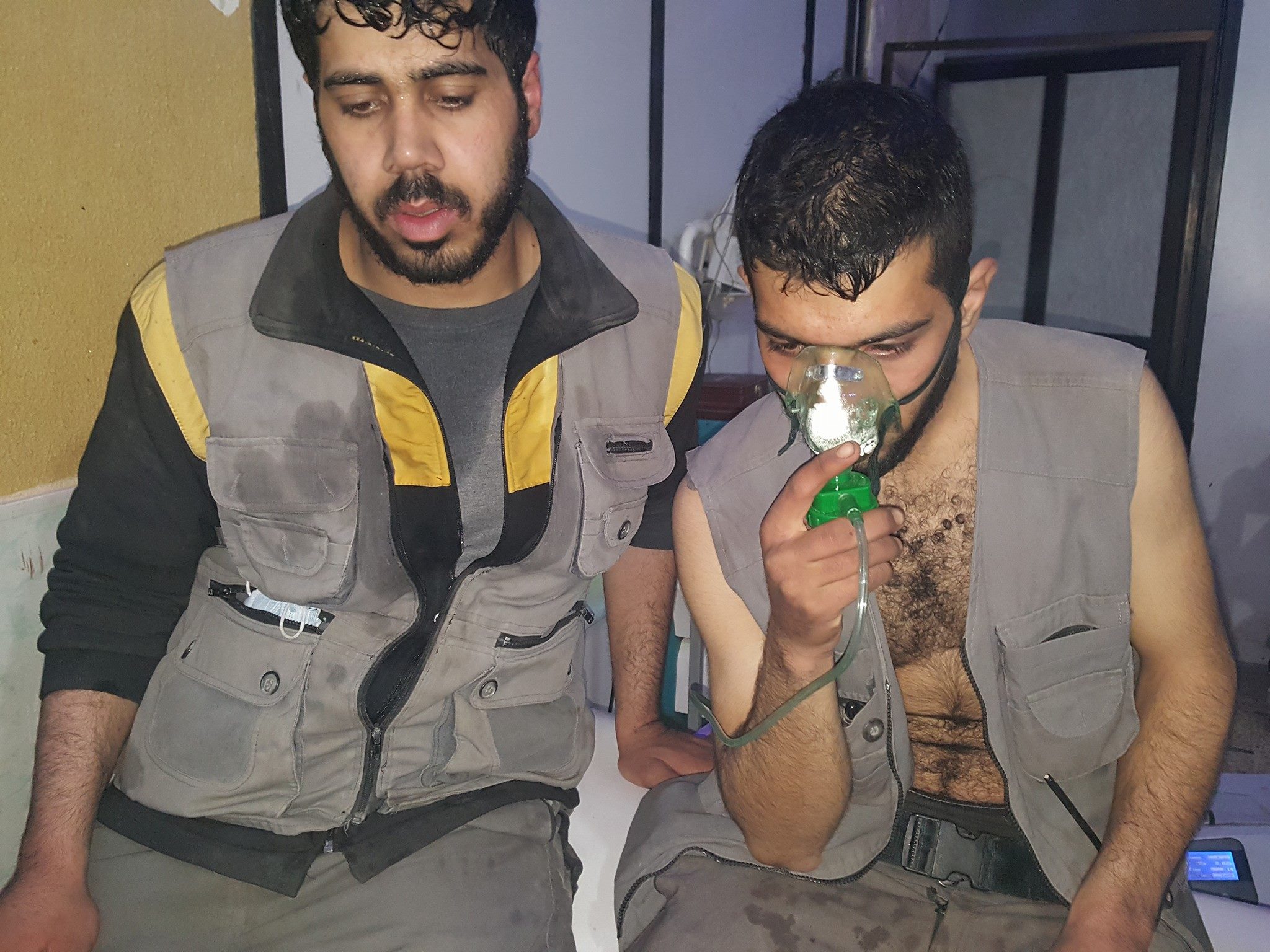 An image shows two paramedics who were exposed to toxic gas

"We have received several cases of suffocation of civilians, who had been exposed to a poisonous gas. Their clothes smelled of very strong chlorine odor. There was a child among the injured whom we couldn’t save because he was in the centre of the targeted area the time of the attack. Kids his age can’t take high concentration of toxic gas, which we initially suspected to have involved chlorine, as the child’s features and face indicate that he was suffocated, in spite of the presence of some scares resulted from the falling rubble but they were minor and has nothing to do with his death."

There was another child named called Ahmad al-Ahmad, 10 months age, whose condition was very serious, he suffered a lot before he died on the morning of 1 March 2018, of a dyspnea.
Dr. Saeed goes on to say:

“The injured who were taken to medical points had a chlorine-like odor, they suffered from dyspnea and the irritation of bronchus and conjunctiva, we put the injured on nebulizer and oxygen devices until they got better and they have been under medical observation for 24 hours.” 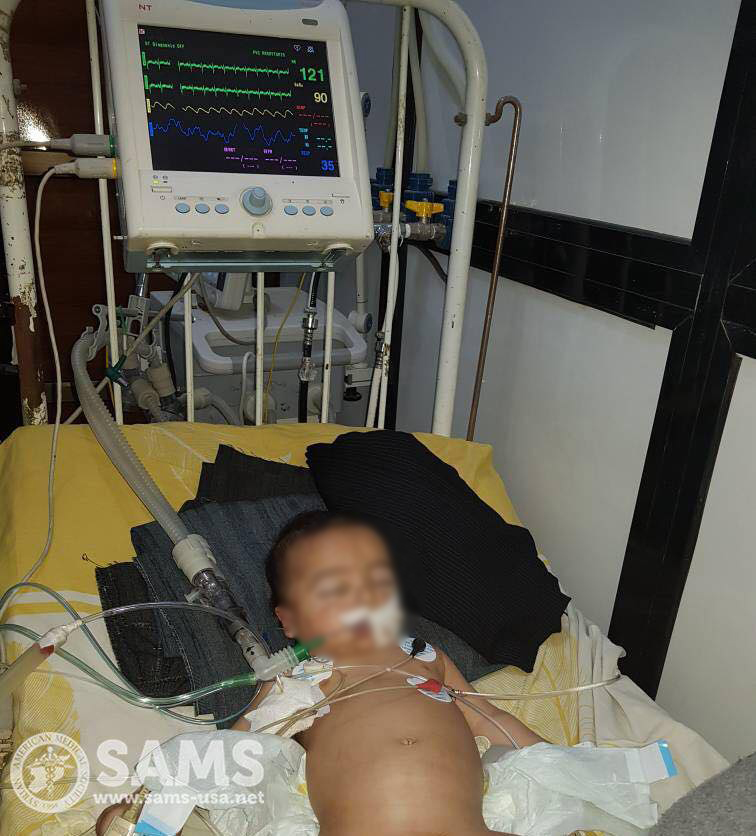 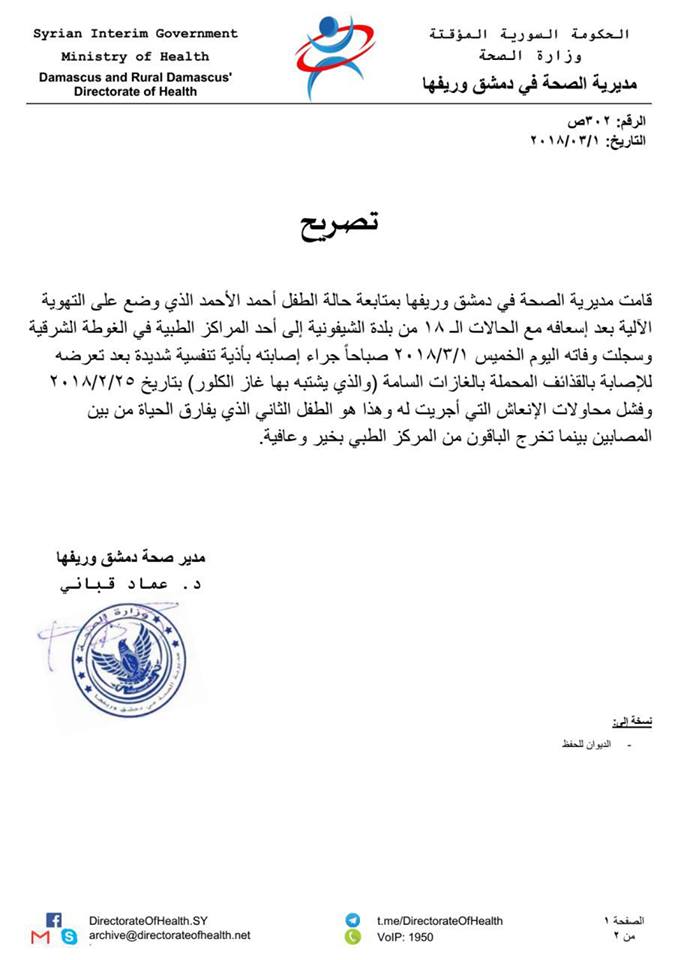 An image shows a statement issued by Damascus and Damascus Rural Health Directorate in which it release the cause of the death of Ahmad al-Ahmad with severe dyspnea after exposure to chlorine gas-laden missiles.

According to STJ field researcher, the bombing rate increased dramatically after the adoption of Security Council’s Resolution No. 2401. Al-Shefonia was the most shelled town, where it was subjected to a non-stop airstrikes. The Syrian government is following scorched-earth policy, where it bombed the town with chemical weapons (rocket or barrel according to the obtained testimonies) and returned to bombard it again with dozens of missiles, which was the reason for the delayed arrival of the ambulance after the attack.